'For Greater Glory' a de-raza-fied revolution 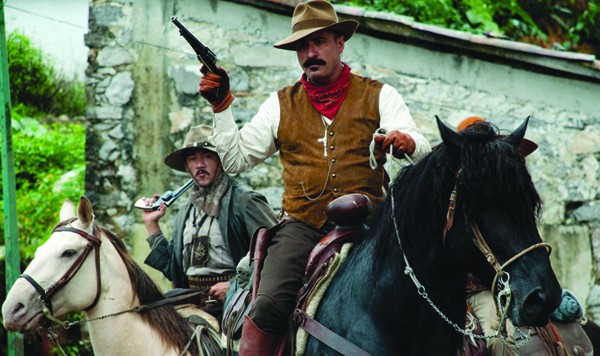 Director Dean Wright's For Greater Glory concerns one stage of the Mexican revolution, the Cristero War of the late 1920s, which claimed 90,000 lives and which President Plutarco Elías Calles (played by a debonair Rubén Blades) triggered by taking on the power of the Catholic Church.

As told by the film, a general, Enrique Gorostieta Velarde (Andy Garcia), is hired to lead the religious guerrillas. General Velarde's troops are green, volunteers or priests, like the armed Father Vega (Santiago Cabrera).

For Greater Glory mentions the heroic women who smuggled bullets to the rebels, although one of the most exciting exploits of these women is left unfinished right in the middle of the story. The film also remembers the clerics who were executed. Peter O'Toole evokes melancholy tenderness as Father Christopher, and For Greater Glory evokes the outrage it seeks when the ancient priest goes to the wall.

But watching For Greater Glory is like going to see a film about Napoleon and discovering it's actually about his favorite drummer boy. Everything stops (particularly in the third act) to follow young José (Mauricio Kuri), an altar boy who becomes a Cristero warrior.

Mexican viewers might feel slightly miffed about the casting of Blades, Cabrera, Garcia and Isaac (born in Panama, Venezuela, Cuba and Guatemala, respectively), but James Horner's soundtrack is a worse form of de-raza-ination. Does Horner actually watch the movies he's scoring? Such audio swill in a film about a nation responsible for some of the best music in the world is reprehensible.

Nevertheless, the scenery is sweeping, the art direction and the costumes are handsome, and the battle scenes are staged with the technical finesse of late-period John Wayne films; the heroes here are certainly the best marksmen since the Duke died.