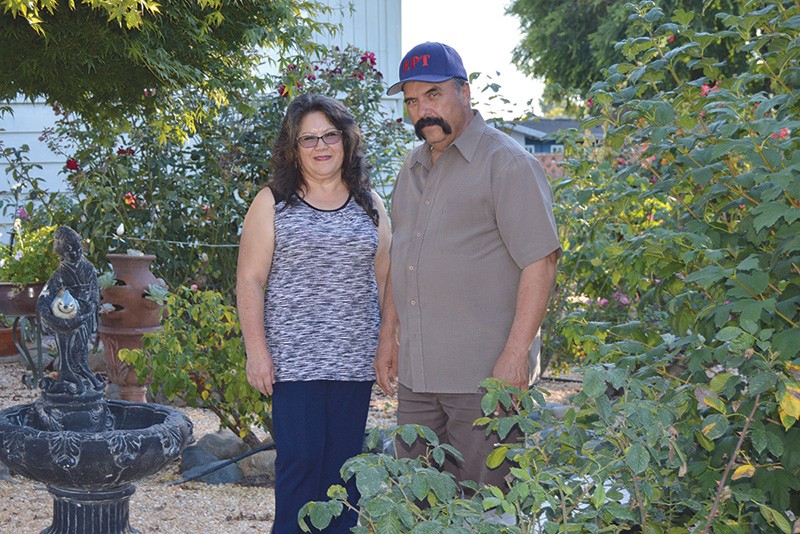 Rohnert Park police officer David Rodriguez was already involved in a Fourth Amendment federal lawsuit when he pulled out his service revolver and asked Don McComas if he was "some kind of a constitutionalist crazy guy or something like that" during a tense encounter in McComas' front yard in July. The video McComas took of the incident has since been viewed more than 400,000 times on Youtube.

Rodriguez is one of three Rohnert Park officers named in a lawsuit filed with the U.S. Fourth District Court in San Francisco that alleges he and two other officers, Jacy Tatum and Matthew Snodgrass, unlawfully and without a warrant entered the Rohnert Park home of Elva and Raul Barajas in November 2014 while executing a probation check on their son, Edgar Perez.

The complaint alleges that two of the officers questioned the parents at the front door while the third officer, Tatum, entered the home through a side door with his weapon drawn.

The Barajas' attorney, the San Francisco–based Morrison & Foerster, have asked for a summary judgment from the court, and argue that the officers' training is a key factor in the unconstitutional policing practices going on in the Friendly City.

The suit, in effect, puts Rohnert Park's training guidelines for probationers on trial. "Summary judgment should be granted to ensure that the City of Rohnert Park refrains from searching probationers unless there is reasonable suspicion for believing that the probationer has committed a crime," reads the latest court documents filed Sept. 10.

The plaintiffs and defendants have both asked for a summary judgment in their favor from the court on Oct. 15, the date set for the parties to argue their case. If the court denies the motions for summary judgment, the case will go to trial Feb. 29.

The suit rests on the principle that probationers have the same rights as anyone when it comes to search and seizure protections under the Fourth Amendment of the Constitution: "The Supreme Court of the United States has made it clear that in order for the government to search an individual, her vehicle or her home, law enforcement must at least have reasonable suspicion to believe that that person has committed a crime," reads the Sept. 10 filing from the plaintiff's lawyers.

"That rule applies equally to probationers," the complaint charges, but "in the city of Rohnert Park, law enforcement has set aside this requirement in every case where a probationer has a search condition as part of her probation."

The case turns on whether the officers can conduct random searches in the absence of a reasonable suspicion that a crime has been committed. Rohnert Park police believe that they can do just that. "That is not the law," the plaintiff's lawyers contend. "As the Supreme Court has held, reasonable suspicion was necessary to search the Barajas home."

A training officer with the Rohnert Park force, Sgt. Jeff Justice, provided testimony that claimed police in Rohnert Park could execute a random probation search even on a probationer who was, for example, sitting on a park bench feeding the ducks.

Tatum, identified in the suit as the officer who entered the Barajas home through a side door with his gun drawn, testified that he's done that same thing at least 50 or 60 times in previous probation checks, according to court documents.

The Barajas lawyers conclude in their suit that "the city has sanctioned and ratified its police officers' actions to conduct unlawful searches, including in this case; failed to train and supervise its officers properly to ensure they only conduct searches under the color of the law; and acted with deliberate indifference in failing to properly train its officers or to adopt policies necessary to prevent such constitutional violations."

The more recent incident involving Officer Rodriguez was not a probation check, though it did involve a citizen whose family has (by his own account), apparently had other run-ins with Rohnert Park police.

In that encounter, Rodriguez appeared to use a cell phone to film McComas from his cruiser while McComas filmed Rodriguez pulling up in the police car. The officer exits his cruiser and almost immediately draws his weapon as he demands that McComas take his hand out of his pocket.

McComas was in his front yard attending to his trailered boat, and the video shows that he's clearly unnerved by the drawn weapon. McComas retreats while filming Rodriguez, and makes comments to Rodriguez to the effect that the Rohnert Park police have harassed his family before.

McComas was not charged or detained; Rodriguez eventually holstered his weapon and departed.

The video went viral, Rodriguez was put on administrative leave with pay and Rohnert Park officials brought in an outside investigator to see what went wrong. In a statement, city officials acknowledged that Rodriguez's actions in the McComas driveway were unusual: "The incident portrayed on the video is not a typical interaction between our public safety officers and the public."

But according to the federal lawsuit that names Rodriguez as a defendant, it is typical for Rohnert Park officers to enter innocent people's homes to execute probation searches, with their guns drawn. The complaint reads, in part:

"When probation searches are conducted, it is the practice of the Rohnert Park Police Department to enter homes through a back door with guns drawn even while police are explaining to residents at the front door why they are there."

The suit against Rohnert Park further alleges that Rodriguez and Tatum were involved in a 2010 incident involving Perez that took place in front of the Barajas house while Perez was playing football in the street with his brother.

That incident is recounted in filings that allege Officer Tatum accused Perez of being involved in a hit-and-run accident as a pretext to search the Barajas home. The incident ended badly: Perez argued with Tatum, Rodriguez tasered Perez, and Perez wound up in the hospital, "bleeding and beaten up," according to court documents. Perez was never charged with a hit and run offense, the plaintiff's filings assert.

The federal suit alleges an ongoing pattern of harassment. Perez was also pulled over while driving—for no reason other than Tatum recognized him as a probationer, as Tatum himself admits in the court documents. The stops, Tatum says "may have been just a probation search when I saw him driving."

The lawsuit alleges that four years after the front-yard encounter, the officers again searched the Barajas home unlawfully and absent any reasonable suspicion or allegation that Perez had committed a crime.

While Rodriguez is a named plaintiff in the federal civil rights complaint with the district court, the suit alleges that he was, in effect, following his training: "In Rohnert Park, police officer stop and frisk people, pull over people's vehicles, and enter people's homes based solely on a probation search condition."

Probationers can be subjected to a warrantless search, but the suit alleges that searches must be contingent on the suspicion that a crime has been committed, a principle that's been upheld by the Supreme Court.

City officials in Rohnert Park dismissed the Barajas complaint. Now Rohnert Park has filed its own responses to the lawsuit that allege that the officers did nothing wrong, and that there's nothing wrong with the training they received. In an email, Assistant City Manager Don Schwartz says the city can't comment: "We don't comment on lawsuits."

Rohnert Park has hired the Santa Rosa–based Perry Johnson Anderson Miller & Moskowitz to defend it against the federal suit. The city has denied all the allegations and further charges that any damages suffered by the Barajases were the result of their own "careless and negligent" actions that day. In a multipronged rebuttal on file with the district court, the city denies "generally and specifically each and every allegation contained therein."

Rodriguez wasn't identified in the suit until May of this year; in the court documents, the Barajas attorneys say they were unable to identify him or the other officers before then. Meanwhile, McComas has hired Santa Rosa attorney Daniel Beck to pursue a civil rights lawsuit against Rodriguez and the Rohnert Park police force.