Back in the Ring

It's a warm Central Valley evening when Sir Samurai drives down the highway toward Modesto, an hour and a half away from his home in Sacramento. The 41-year-old is making the rounds again. Next weekend, he'll be in Reno, but tonight, with a warm breeze whipping through his long hair, he sets his eyes south.

It's near dusk when he arrives at the squat multipurpose building. The lights in the parking lot are on—mostly. A handful of cars already litter the lot, and Sir Samurai spots his partner, Drake Frost, the other half of the Honor Society. As they walk in through the side door marked "Wrestlers Only," Sir Samurai sees his stage for the night, a mass of steel beams, tightly wound ropes and wooden planks covered by canvas mats.

If you only know names like Hulk Hogan, Steve Austin or Dwayne "the Rock" Johnson, you've barely scratched the surface of the pro wrestling world. Punk bands don't have anything on the life of independent professional wrestlers like Sir Samurai, who endure a hard road for a relatively small amount of glory and almost zero money. "Jobbers," as the working-class pros are called, practically live on the road and will drive long hours to get the chance for just 20 minutes in the ring.

For over 50 years, independent federations have been holding matches and bringing live action to enthusiastic crowds throughout the country. In California alone, dozens of promotions, like Sir Samurai's Supreme Pro Wrestling out of Sacramento, operate in small towns and big cities alike, though professional wrestling has largely been absent in the annals of North Bay sports history. Until now.

On Nov. 14, Phoenix Pro Wrestling, the newest wrestling promotion in the Bay Area, will make its debut in Petaluma at the Phoenix Theater.

Phoenix Pro Wrestling is the brainchild of Josh Drake, KWTF radio founding board member and an event organizer who hosts a popular weekly gaming event in Petaluma as well. Working alongside Phoenix Theater booker and filmmaker Jim Agius and Sir Samurai's Supreme Pro Wrestling federation, Drake plans on reshaping public opinion of this niche entertainment and aims to build the first successful wrestling institution in the North Bay.

"There is no wrestling north of Oakland or west of Sacramento. There have only been a handful of shows up here and nothing sustained; no one has made it an institution," says Drake.

Drake and Agius are handling the event promotion and production, with an almost obsessive focus on a professional look and attitude. Sir Samurai, a veteran promoter himself, is booking wrestlers from around the region. Phoenix Pro Wrestling will feature all the hallmarks of the classic wrestling events that fans grew up with, from an authentic championship belt made out of leather and gold, to pre-match interviews and a cast of colorful characters.

"We're giving the wrestlers an environment to thrive," says Drake. "We're setting the tone to look like an already established promotion, like the stuff we watched on TV. That's how I like my wrestling." 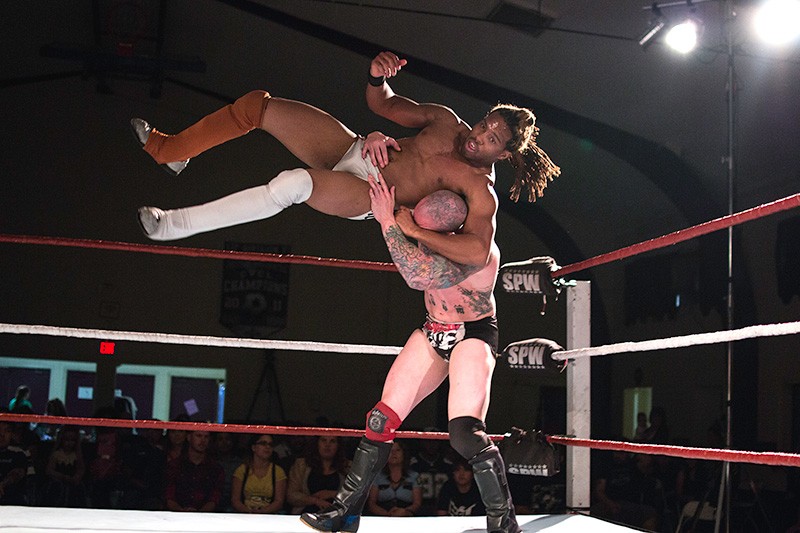 Phoenix Pro Wrestling will be filming the event for the web. "Our idea with this show is to not only put on a great wrestling show for the audience in the room, we're also trying to make episodic web television wrestling shows," says Drake.

He shares a story about watching WCW's Super Brawl I over 20 years ago on pay-per-view. A tag-team championship match between Sting and Lex Luger and the Steiner Brothers was interrupted by the "Russian Nightmare" Nikita Koloff, who stormed the ring, bashing Sting.

"And that's all cool," says Drake. "But what's awesome is when Nikita Koloff bails, he goes into the back and the cameras follow him, and you see Sting coming for him and they start fighting it out back. And then they go out the door and start fighting in the parking lot, and it was like, 'This is for real!' I'm 10 years old and I'm thinking, this is the most awesome thing I've ever seen," reminisces Drake.

"It went so much further than just wrestling in the ring. It made it bigger," Drake continues. "And after that I didn't play with my Ninja Turtles anymore. I wrestled with them. And every match went out of the ring. I think it's the extra stuff that makes it so much more interesting."

And while its unlikely that any matches will go out onto Washington Avenue on Nov. 14, Drake and Aguis are focused on delivering an event filled with suspense and action.