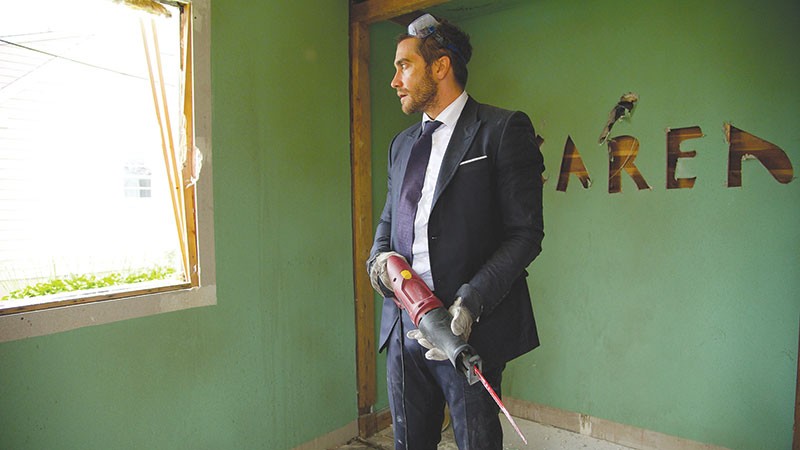 Thought you'd escape the wanton devastation in Batman v Superman by going to the allegedly mature drama Demolition? The joke's on you. Jean-Marc Vallée's follow-up to his excellent Wild and his middling Dallas Buyers Club concerns a man who seeks catharsis through smashing things.

Like Bruce Wayne, Davis Mitchell (Jake Gyllenhaal) is an affluent, muscley executive driving around in an expensive car, traumatized by the loss of a loved one. Batman never had to describe the worst day of his life, though, as Davis does at the dinner table, when he displays a stiff upper lip over the death of his wife, Julia (Heather Lind): "Massive head trauma in a car accident. Can you pass the salt?"

Davis has been cracking up ever since his wife died, and he's acting out through an obsession to take things apart. Davis' boss, Phil, also his father-in-law (Chris Cooper, too good for the flat part of an ornery investment banker), is becoming alarmed by the disassembled computers and taken-apart bathroom stalls turning up in his office.

Davis recounts his sad story in a letter to the complaint department of a vending-machine company. His correspondent, played by Naomi Watts, ultimately gives him a phone call in the middle of the night, and what follows is a relationship of equal parts stalking and love letters. The movie, however, isn't about recovering passion with a new lover or coming to an understanding about the depth of grief; it's about tantrums, it's about making couch forts with sheets and flashlights, it's about riding carousels.

Bryan Sipe (The Choice) scripted the film, but who knows who to credit for the ending, a matching pair of fistfights edited in with what looks like last-minute panic. Sipe, who is from the Jersey Shore, cites Bruce Springsteen as an influence on his writing, but there's not much common-man celebration here; Demolition, after all, is the story of a man who has so much money he can sledgehammer through his granite kitchen counters and 40-inch TV to release tension. There hasn't been a movie about grief this awkward since Reign Over Me.