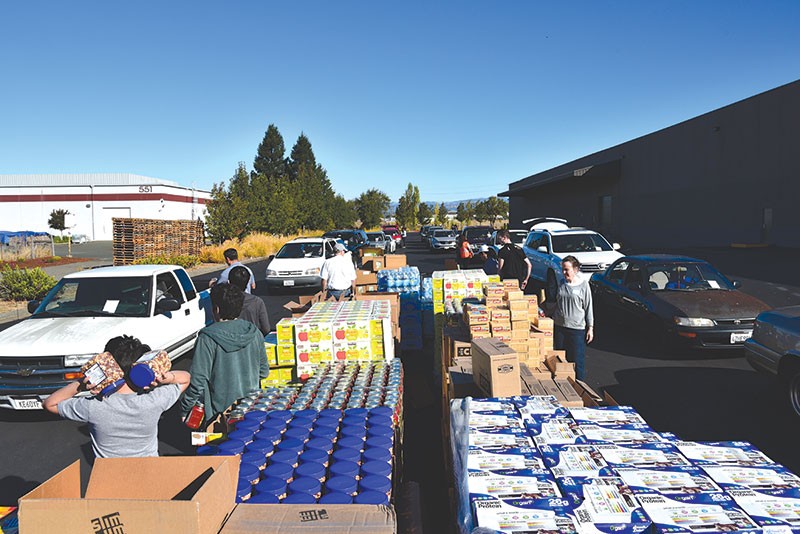 On a recent Sunday morning, there was a long line of cars outside Station 3990, the emergency distribution center for the Redwood Empire Food Bank (REFB).

With the North Bay fires leaving many without a steady source of income and food, the food bank has been a saving grace. So much so that, outside of the building, a group of people is re-lifting a sign that has fallen, reading "Thank You Second Responders." Everybody appears in high spirits, chatting and laughing together as they fill carload after carload. There's a sense of community that only catastrophe can bring about.

The REFB has been around the block when it comes to feeding those in need. But never has it witnessed a tragedy like this.

Without the fire, the food bank still has plenty of work to do. It runs 12 programs that fall under three initiatives: Every Child, Every Day, which is dedicated to ending childhood hunger; Senior Security, which provides seniors with weekly produce pantries, monthly food boxes and any extra groceries they may need; and the Neighborhood Hunger Network, with the goal of supplying fresh produce and necessary groceries to anyone in need. "This is just what we do," says REFB communications coordinator Kevin West of the organization's dedication to serving the community. "We help hungry people."

The food bank's website lists facts that are indisputably heroic. From distributing 13.1 million meals to serving over 175,000 meals to children after school and in the summer, the REFB is relentless in its dedication to its mission, even in the face of adversity. "We're the most misunderstood company," says Goodman. "People don't know what we do. During times like this, people get it. But we'll still be here after the media and national attention fades out."

Sonoma County has rallied in this time of need, with continuous financial and food donations flowing in within the first two weeks. "The support of our local community and all of the Bay Area has been amazing," says West. "Donations have come from individuals, community food drives, school food drives, businesses and corporations. We couldn't do what we do without community support."

But West reminds the community that the food bank still needs help. "With the fires extinguished, we need community response to last. We are in this together for the long haul, and if support lessens, it will directly affect the response," he says.