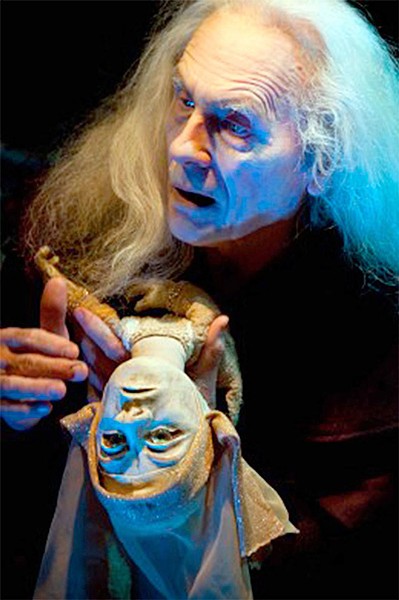 Warm weather in California means a number of things: a rise in local sales of sun block, a heightened chance of troublesome grass fires—and a sharp spike in productions of plays by William Shakespeare.

This year, the annual array of Shakespearean comedies and dramas includes a puppet-heavy presentation of the playwright's greatest tragedy; a localized adaptation of his final play; an updated musical version of a beloved romance; and a Western-themed take on that same play, performed in a Marin County amphitheater.

Lear (running through July 2 at Main Stage West in Sebastopol) is an intense, funny and fierce look at King Lear, presented by Sebastopol's Independent Eye and featuring the two performer-puppeteers, Conrad Bishop and Elizabeth Fuller. Bishop is a first-rate Lear, tilting toward madness and despair as his faithful Fool (Fuller) remains by his side. All the other characters are puppets. It's eerie and awesome.

In Cloverdale, Shakespeare's original Tempest (through June 25 at the Cloverdale Community Arts Center) gets a more traditional run (the island, the spirits, the monsters, the storm), while in San Rafael, Much Ado About Nothing (June 30–July 23, courtesy of the Marin Shakespeare Company) maintains Shakespeare's language but puts its mismatched lovers, fiendish plots and goofball sidekicks into cowboy hats and plaid garb for a Western feel.

In the Mood (July 13–Aug. 5, by Shakespeare in the Cannery) takes the same story, and much of the language, but sets it in 1940 Italy, just after WWII, and includes a number of popular big band tunes. At the same location later in the summer, 6th Street Playhouse presents Fairy World (Aug. 10–Sept. 2), a stripped-down, reworked version of A Midsummer Night's Dream, conceived by Jared Sakren.

In Sonoma at Buena Vista Winery, Sonoma Shakespeare Avalon Players presents the twins-switched-at-birth Comedy of Errors (Aug. 9–20), and in Petaluma, on the river, Petaluma Shakespeare brings us the bawdy history Henry IV, Part One (Aug. 25–Sept. 9).

Finally, back to San Rafael, Marin Shakespeare concludes its season with the bittersweet Love's Labors Lost (Sept. 2–24), Shakespeare's only romantic comedy that doesn't end with a marriage.

Most of these shows take place under open skies, so barring any unexpected tempests, this should be one epic summer.