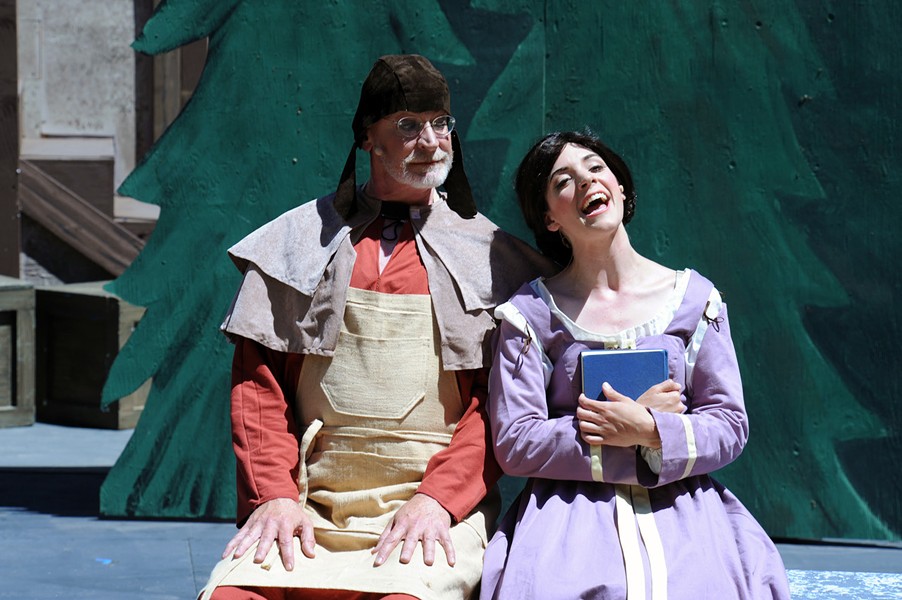 After 104 years of staging elaborate outdoor theater productions in a massive rock amphitheater high on Marin County’s Mt. Tamalpais, the legendary annual Mountain Play has routinely much proven that, when it comes to staging the world’s most popular musicals, bigger is always better. The current production of Disney’s Beauty and the Beast further makes that point.

With a cast of 37 performers and a live 20-piece orchestra, aided by a soaring, rotating castle, with cleverly over-the-top costumes by Michele Navarre-Huff (love the dancing cheese-grater), and boasting strong singing voices that squeeze every ounce of emotion and nostalgia from Menken, Ashman and Rice’s gorgeous score, this heartwarming and eye-pleasing presentation is without question one of the biggest, and best, shows of the season.

Adapted in 1994 from the Oscar-nominated 1991 animated film, the stage version is, in many ways, superior to the original film, and far better than the recent “live action” film adaptation starring Emma Watson. One of the film’s failings was that it dropped or replaced some of the stage musical’s best songs. Fortunately, those tunes – mainly “If I can’t Love Her” and “Human Again” are in fine form here, beautifully sung and artfully staged by director Jay Manley.

Not just a master of stage spectacle, Manley is obviously a romantic at heart. This is, after all, a love story – love of al kinds—and that point is clear throughout, no matter how many dancing spoons, howling wolves, and splashy song-and-dance numbers the audience is served.

As Belle, Chelsea Holifield is fine and feisty, and as the Beast—a once-selfish prince cursed to become a monster till he learns to love and be loved —Daniel Barrington Rubio is magnificent, a first-rate singer and an impressive enough actor to make us believe he’s terrifying, even while wearing a slightly fluffy animal head with horns that flop about like rabbit ears. Jeff Wiesen (who played Captain Hook in the Mountain Play’s Peter Pan two years ago) plays the villainous Gaston so expertly he had audiences loving him and hating him at the same time.

Other standouts include Buzz Halsing as Cogsworth, the Beast’s curmudgeonly butler, curse to slowly become a clock, and the superb Zachary Isen as Lumiere, another servant, similarly transforming into a candelabra. The entire cast is strong, with a particularly fine, shape-shifting ensemble.

Well worth the trip up the mountain, this Beauty and the Beast is theatrical magic of the best, biggest, and most enchanting kind.