The North Bay responds to the climate crisis

Trathen Heckman is in his backyard micro-ecosystem with the buzzing honeybees and the kiwis, the root medicines and the roosters, as he explains the mission of Daily Acts, the Petaluma organization he founded.

Heckman, a former pro snowboarder and happy refugee from corporate America, decided about 10 years ago that he wanted to become "less a part of the problem," as he puts it, and set his shoulder to the wheel of activism with a plan to give people the tools and skills to act locally while fretting globally. He was feeling, he says, "a lack of connection, a lack of vitality."

He was out there slogging away in the Babylonian trenches, until 9-11 and the death of his mom, twin events which became the catalyst for Heckman to zero-in on how he wanted to live. He sought out pioneer activists in what was then a new world of backyard wetland-to-forest systems, admired their spirit and sensibilities and wondered, he says with a gleam and a laugh, "what's in their Wheaties?

Enter Daily Acts, a nonprofit that offers workshops, actions, networking and other activities to help engender a shared sense of connectivity, vitality and a general community joie de vivre that is heavy on volunteer labor and cross-generational appeal. Among its other successes, Daily Acts has spearheaded legislative efforts in Sonoma County, for example, to make it easier for people to set up graywater-reuse systems in their homes, through a project called the "Laundry to Landscape" program.

This is the lingo of the lush and fecund backyard ecosystem, replete with propagation guilds and edible landscapes, sustainability tours and "mulch madness" parties. Daily Acts also brings the edible-ecosystem model to schools, churches, government plots and, critically, minority communities. Heckman's wise to the elitism critique and notes that the organization recently put together its 100 Salsa Gardens project that came complete with lots of donated wine barrels and buy-in from the county's large Latino population. Add "ecological equity" to the vernacular.

We're living in a period characterized by a "confluence of crises unlike anything we've seen in human history," Heckman says as he plucks raspberries and boysenberries from his backyard food forest. With a sweep of his arms, he describes the layers, from the root medicines down below to the top of a lone towering redwood, with layers in-between yielding a bounty that Heckman says runs from between 500 and 1,000 pounds of food a year.

It's a living embodiment of human-scaled efforts to combat climate change, a marvel of sustainable cool that pushes back against hardened notions of suburban life.

The "crabgrass frontier," as described by Kenneth Jackson in his landmark 1985 study of the same name on the social construct of suburbia, is giving way, slowly, to an actual model of down-home "conservative" values that highlights, well, actually conserving things, appreciating their value, and reusing resources instead of wasting them.

Heckman's efforts speak to a curious—and welcome—turn of events in the development of the American suburb. 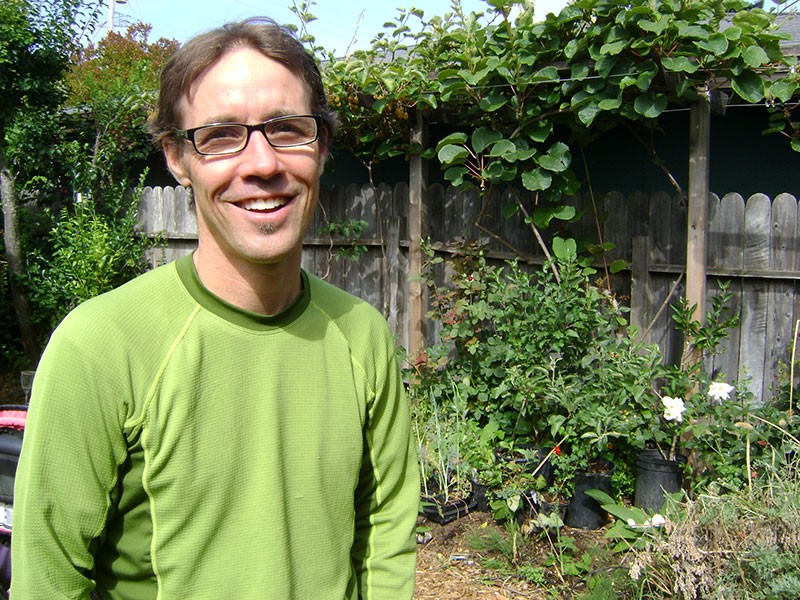 The suburban boom in the U.S. kicked into gear in the post–WW II era, when cookie-cutter neighborhoods were carved out of farm fields for returning veterans. The war years themselves had seen the phenomenon of the "Victory Garden," where Americans were encouraged to do their part to beat fascism by growing lettuce and tomatoes at home. Once the war ended, the homegrown gardens gave way to grass planted on former farmland, and the eco-nighmare lawnmowers invaded, like Patton.

Nowadays, efforts such as Heckman's are part of a new push to achieve victory over the global scourge of rising temperatures and sea levels which has, despite the best efforts of the climate-change deniers, manifested in tangible impacts, such as the drowning of the Florida Keys and hundred-year storms that happen every three years.

For his part in this new war effort, Heckman installed a 1,500-gallon water tank that captures rainwater from his gutters and recirculates it throughout the property. The tank helps create the ground-level wetland that supports all measure of berries, fruits and veggies, stuff like jasmine, garlic and Pakistani black mulberries, and a plum tree that's been grafted so several varieties grow from the main trunk.

Daily Acts' offices are several blocks away from his homestead, and Heckman notes that you can see what his organization's efforts have yielded. Most of the homes here in pretty Petaluma hew to standardized suburban practices of green lawns and mowers thereon, but every so often, there's a wildflower outlier that's been given over to an edible front yard.

"It was such a different world a decade ago," he says.—Tom Gogola