In a world where meat rules, North Bay chefs showcase local vegetables at the center of the plate

When it comes to dining out, it can suck to be a vegetarian. While most restaurants offer a few token meatless dishes, they tend to hold the creativity as well as the meat. You know the stuff—pasta primavera, cheese pizza, salad.

Then there are those restaurants that serve highly processed, textured vegetable protein and tofu dishes that masquerade as meat—mock chicken, sawdust-flavored veggie burgers, insipid tofu dogs and other desperate attempts to make meatless dishes taste like meat. In many cases, these meatless products are just as processed and factory-farmed as the meat they seek to replace. Vegetables should be enjoyed on their own terms rather than as sad analogues to meat.

Given that just about every restaurant these days touts its seasonal, farm-to-table cuisine, one would think there would be more places that highlight vegetables as something other than a side dish or salad. And while it's true that vegetarians are a minority—about 3 percent of the U.S. population—you need not be a vegetarian to appreciate well-prepared vegetables.

The truth is, it's harder to cook creatively with vegetables and serve them at the center of the plate. Anyone can grill up a steak or burger, but it takes real skill and technique to elevate the veggie to the starring role.

In France, chef Alain Passard has built his reputation on his vegetable-based cooking. His restaurant, L'Arpège, is a destination that appeals to food lovers of all types, not just vegetarians.

Closer to home, chef Perry Hoffman at Healdsburg's Shed does a great job of putting vegetables in the spotlight, and Santa Rosa's new Seed to Leaf creates some delicious plant-based menu items with vegetables, seeds and nuts. But still, vegetables and the people who love them don't get the respect they deserve.

"The worst is the 'chef's vegetarian plate of the day,'" laughs Carneros Bistro executive chef Andrew Wilson. The restaurant is located in the Lodge at Sonoma Renaissance Resort & Spa. Pity the poor vegetarian who is forced to eat a plate of lettuce with carrot sticks, potato salad and maybe some cheese. Fortunately, there are chefs like Wilson who relish the challenge of featuring vegetables in a starring role. 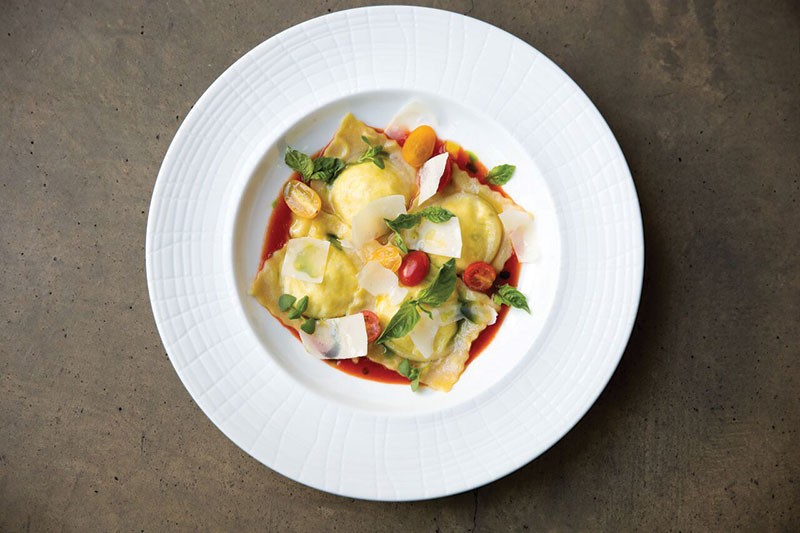 Wilson admits Carneros Bistro is not a vegetarian restaurant by any means, but he says he strives to offer non–meat eaters solid choices. He recently had a truffled quinoa dish on the menu that featured wood-roasted baby beets and carrots, confit shallots, foraged mushrooms and twin sauces.

Wilson says he works to put interesting vegetarian dishes on the menu, but they require a concerted effort.

"It can be very challenging," he says. He looks for dishes that can serve as "meat replacements" and hold their own as an entrée. "There's a lot of thought that goes into it."

Vegetarians are a minority, but they aren't shy about letting the kitchen know what they think, he says. "Here in Northern California, they are very vocal minority."

Hazel restaurant in Occidental has an advantage that many restaurants do not: a wood-fired oven. Chef and co-owner Jim Wimborough makes some great pizzas that go well beyond pesto and cheese. Last summer, they served a great pie with corn, cherry tomatoes, jalapeños and Pugs Leap chèvre.

Wimborough says making the most of what local farms have to offer is the best way to showcase vegetables. "It's simple when you start with good ingredients," he says. "You want to fill people up and make them feel like they've had a meal without having to feed them a piece of chicken or meat."

On the menu now is a late winter dish featuring red quinoa, butternut squash, maitake mushrooms, arugula and a dollop of crème fraîche. He's looking forward to the wave of spring produce that will soon start to arrive. "That's more exciting to me than a rib-eye," he says.

Bill Govan has worked in the restaurant industry since 1978, at places ranging from the Madrona Manor in Healdsburg to the Sonoma Mission Inn. He's currently the director of food and beverage at the Duck Club in Bodega Bay. One of his most popular items on the menu is a meatless dish that appeals to carnivores as well.