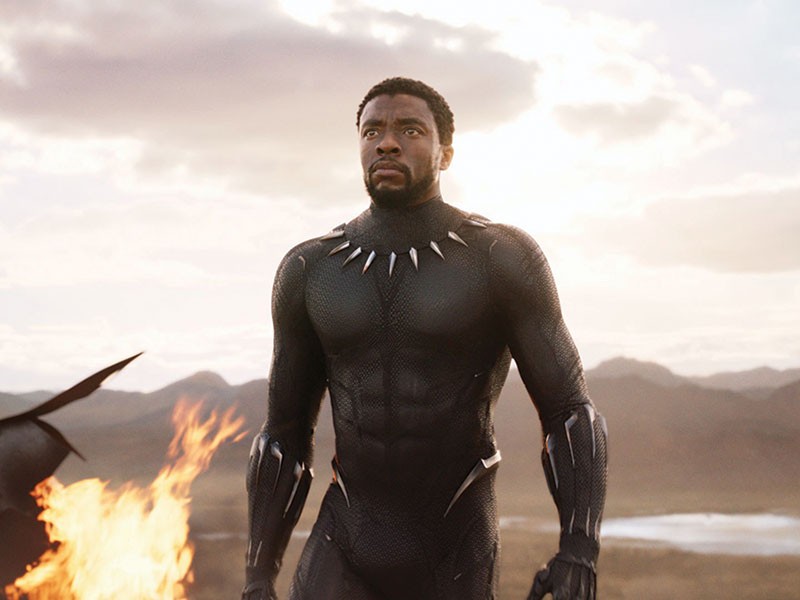 We previously met Black Panther's King T'Challa (the startlingly handsome Chadwick Boseman) in Captain America: Civil War. T'Challa, whose father was assassinated by a vengeful terrorist, is not just king, but the hereditary guardian of the African Shangri-La known as Wakanda, a fantastically advanced civilization disguised as one more poor and remote landlocked country.

Costumed in a black supersuit made of vibranium—the same substance used in Captain America's shield—T'Challa was sucked into the civil war between Earth's mightiest heroes, the Avengers. But this stand-alone film by Oakland-bred Ryan Coogler leaves the matter there and tells of T'Challa's war to retain his crown.

The king is threatened by the Afrikaner villain Klaue, pronounced "claw" (Andy Serkis, made up to look like a roadie for the band Die Antwoord), as well as Erik (Michael B. Jordan), an African-American war vet with a strong personal connection to the royal family. Splitting the villainy is smart. One, Klaue, is a giggling monster, who gives a nasty yet logical reason for shooting a fleeing man in the back, while Jordan's Erik, aka the mercenary Killmonger, has well-written reasons for his grudge.

When T'Challa goes to Korea to recapture some stolen vibranium, he enters a casino dressed in a tuxedo, like 007. Coogler decides this dashing man can be king, hero and spy at once, and he's right. The car chase afterwards through the hilly, neon-lit port city of Busan is thrilling. The production design and costumes are dazzling, a pan-African symphony of masks, gowns, scarification and headdresses—you rarely get such a level of visual density in a film this fun.

Black Panther shows some spine in the way it illustrates conflict in an anti-colonialist's head. Erik is an armed revolutionary confronting a liberal king, and at first you can't say he's wrong in his charges against T'Challa. It's not going too far to suggest that Coogler is restaging the debate between Martin Luther King and Malcolm X as a superhero adventure.

'Black Panther' is playing in wide release in the North Bay.