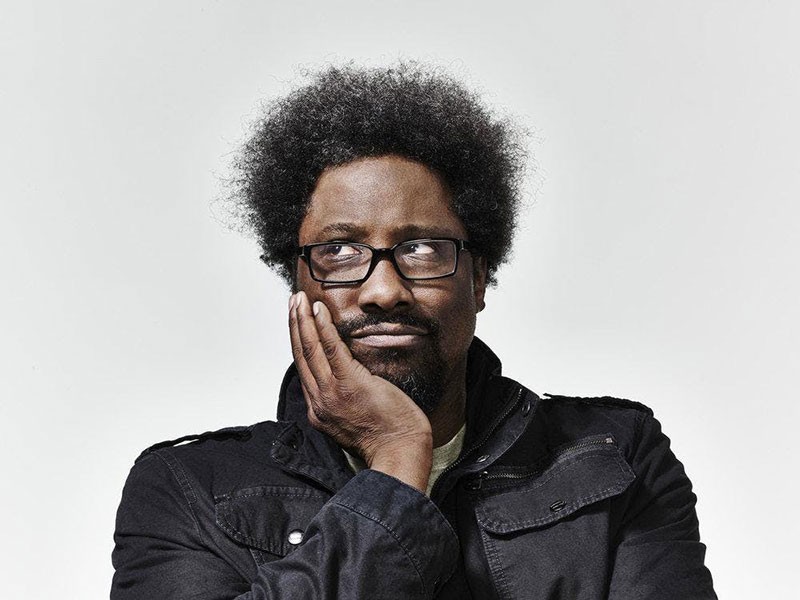 “Like comedy, what turns you on is super personal, and it’s probably nobody’s business. We don’t need to compare notes and argue with each other about what turns you on as opposed to what turns me on. ‘You’re turned on by that? Well, you should only be turned on by what turns me on!’ We start doing that, and we’re back in the puritan era. Comedy is like that. How often have you laughed at a joke, only to be told you shouldn’t have laughed? They’ll say, ‘Hey. That’s not funny!’ But the truth is, it’s just not funny to them.”

Bell has had plenty of experience on both sides of such laughter. One of the country’s most notable political comedians of the day, Bell’s work has often been described as polarizing, and at the same time, has been praised for its ability to unite audiences by finding the humor in their commonalities as well as their differences. Bell’s new book, The Awkward Thoughts of W. Kamau Bell, is an entertaining collection of essays with the binder-busting subtitle “Tales of a 6’ 4”, African American, Heterosexual, Cisgender, Left-Leaning, Asthmatic, Black and Proud Blerd, Mama’s Boy, Dad, and Stand-Up Comedian.”

His new Netflix comedy special, Private School Negro (which went live in late June), has been acclaimed for Bell’s winningly wise, affably baffled observations about life, race, fatherhood, politics, and the everyday oddities, frailties and upsets that make us all human.

Ben Jardine, of the Under the Radar website, said of the show, “In an era of political and social strife, Bell is the bright comedic light we all need.” Bell will be in Petaluma on October 20, to headline day two of the second Wine Country Spoken Word Festival.

Launched last year by Petaluma-based comic and storyteller Dave Pokorny and his wife Juliet, an event producer and former Pixar Studios employee, the festival brings together some of the best comics, poets, storytellers, authors and speakers in the country.

In addition to Bell, this year’s festival features poet-performer Steve Connell, comedian Zahra Noorbakhsh, storyteller Bil Lepp, poetry slam champion Denice Frohman, and Tennessee storyteller Elizabeth Ellis. Some of the shows will be major showcases featuring several performers at once, with smaller up-close-and-personal appearances, where single performers deliver highlights of their repertoire or talk about how they create their material.

“I like to support local things, and this is just local enough to qualify as local for me,” says Bell. He’s known Dave Pokorny for years and adds, “The Bay Area comedy scene is not large, with every comic just one degree away from everyone else, so I’ve had plenty of opportunities to hear from Dave about the things he’s doing up in Petaluma. Now I finally have a chance to come see for myself.”

The festival includes stand-up, improv, storytelling, poetry, TEDx-style presentations, and readings from published works. “I’m probably a little light on the poetry,” Bell says, with a hint of his famous Muppet-ready laugh. “But to me, this is the best place to be, that place of existing in between all of these different styles and definitions. I feel like we too often segment different types of performances into categories. When I was in the UK, I learned quickly that they do a lot less of that over there. What they define as ‘stand-up comedy’ has a much broader definition.”

Bell would like to see more of that here in the U.S.

“I think comedy is people talking on stage, either into microphones or not,” he says. “Sometimes it’s really funny and sometimes its less funny, but it’s always about being in a room with people, finding humor in real-life situations, telling and sharing stories that come from a whole range of different perspectives.”

That wider definition encompasses Bell’s approach to comedy. “[If] someone asks me to define what I do in one word, I’ll still say ‘comedian,’ because that’s the core of who I am. I might not tell jokes, but I am funny, even if the things I talk about aren’t funny. Which is pretty funny, if you think about it.”

A successful Bell show is one in which he establishes a connection with his audience before launching into an improvisational, in-the-moment exploration of the thoughts, concerns and observations he’s been musing on. “I have three kids,” he says, “so I don’t have the time to overthink my material. I never sit in the corner, gently rolling over my thoughts for hours. My approach is to take a piece of paper and a sharpie an hour before I go on stage and kind of mine my brain for the things I’ve been thinking about. And then I just basically wing it from there—and sometimes I’m as surprised by what I say as the audience is.” It’s risky business.

“As comedians, we take that risk all the time—the risk that what we say will not be viewed as funny to some people. Every comedian, no matter successful they are, has had somebody come up to them at some point and say, ‘I don’t like that joke. It offends me.’ Or ‘I don’t think you should be making light of that subject.’ I think it’s the job of a comedian, at those moments, is to decide: A) Are you a person I want in my audience? Because if you’re not, then I’m okay with offending you. And B) If you are a person I want in my audience, how important is it to me that you like this joke or that joke?”

Bell has, on occasion, changed material because of such conversations. But he does it very rarely.

“If a story I tell or a joke I make is about identity, and I have somehow put down a person’s identity—especially if that identity is of some group that is being oppressed a lot right now in America—then I might say, ‘You make a good point. Let me see if I can find a way around that and still keep the joke, or part of that joke. But sometimes people are just offended. . . If someone is out there in the audience, scowling and crossing their arms, letting me know I’ve offended them, I can say in my mind, ‘You’re offended? Okay. Well, I hope the next joke doesn’t offend you, or, you know, good luck in your experiences with laughter in the future.’ Because there are ways to find the humor in the world around us, and there’s just no way to tell a joke that is funny to everyone. It’s not my job to make everyone laugh, anymore than it’s your job to laugh at every joke I tell. So let’s both do our jobs, maybe everyone in the audience will laugh some of the time, if not all of the time, and we’ll all end up having a pretty good time.”