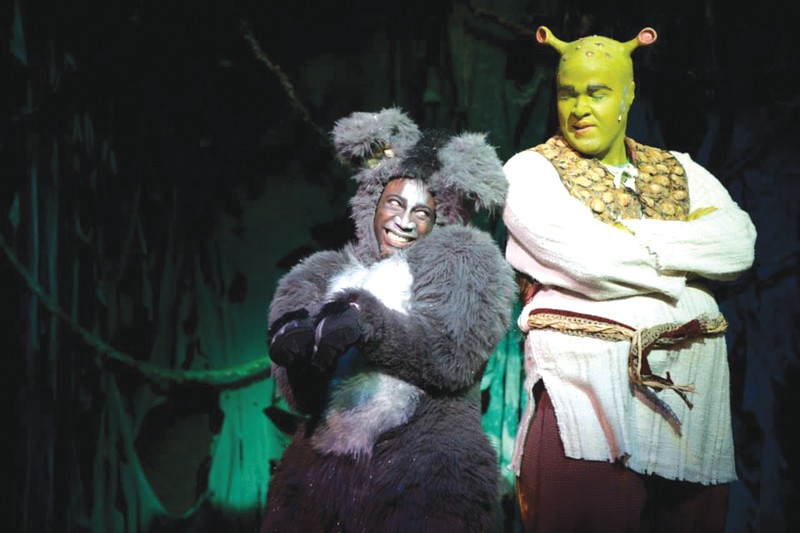 Shrek, the animated Dreamworks movie, works on many levels at once, both celebrating and subverting our expectations of what a fairy tale—or an animated movie—is supposed to be.

The 2008 Broadway musical by playwright David Lindsay-Abaire (Fuddy Meers, Rabbit Hole) and composer Jeanine Tesori (Thoroughly Modern Millie) does something similar, serving up an aggressively entertaining spectacle that simultaneously celebrates and skewers modern theatrical conventions. One minute there's an aching anthem to the thwarted dreams that define us all, and the next there's a duet made up mainly of farting and burping. Somehow, it's all charming and sweet—with a strong social message.

That's the magic of Shrek: The Musical, now playing at Santa Rosa's Summer Repertory Theatre. One wouldn't think the beloved movie, about an ogre who falls for a princess, could adapt to the stage so cleanly. But Shrek: The Musical succeeds in much the same way that Shrek the movie succeeded—by stealing the very best ideas from Disney, and then making fun of everything else, all while presenting a story that honors diversity and encourages self-expression.

Crisply and warmly directed by James Newman (artistic director of the SRT program), Shrek fills the enormous Burbank Auditorium with an eye-pleasing army of singing dragons, trash-talking animals and tap-dancing rats. The story, as in the film, follows Shrek (a gruffly charming Joshua Downs), a solitary ogre who is less resigned to his life as an outcast than he claims to be.

After reluctantly agreeing to rescue the captive princess Fiona (an excellent Emma Sohlberg), Shrek teams up with a talking donkey (Nick Rashad Burroughs, delightful and energetic) to battle a sexy dragon (Lexi Lyric) and bring Fiona back to the foolish and diminutive Lord Farquaad (Scott Fuss, in a wonderfully over-the-top performance done entirely on his knees).

It is Farquaad's tyrannical edict banishing all fantasy creatures that gives Shrek its underlying "Up with (Weird) People" energy, encapsulated in the rousing act-two pep rally song "Let Your Freak Flag Fly," in which the outcast creatures reclaim their lost sense of self-worth.

Despite some muffled microphoning and some less-than-articulated voice work (resulting in the occasional lost line or lyric), this Shrek is a gem. Infectious and heartwarming, it's a clear example of how social statements can be most effective when served up with style, grace, wit and melody—and a well-timed fart or two.