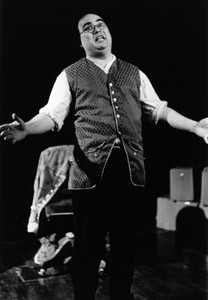 Josh Kornbluth, who regularly performs to acclaim from Alaska to Philadelphia, is still basking in the glow of his feature-film debut, Haiku Tunnel (based on his secretarial-odyssey monologue of the same name). The film pulled more Josh Kornbluth appreciators into the rather San Francisco­ centric audience who know's him best.

His latest monologue, Ben Franklin: Unplugged, which Kornbluth will perform at the Napa Valley Opera House on Sept. 7, was written over two years ago. Most recently, Kornbluth wrote the script for this summer's San Francisco Mime Troupe production, Mr. Smith Goes to Obscuristan.

The story behind Ben Franklin: Unplugged goes that Kornbluth stumbled upon the initial spark while shaving one morning. He suddenly noticed that his own visage bore a remarkable similarity to the dude on the hundred dollar bill: plump, round face, round glasses, nearly identical balding patterns.

In the show, Kornbluth further explores his relationship with his eccentric communist father by paralleling it to Franklin's disowning of his son, William, a staunch Loyalist who was appointed Royal Governor of New Jersey at the same time Franklin was emerging as our infant nation's greatest patriot.

Kornbluth, unlike his animated onstage persona, has a calm, soft-spoken voice over the phone, making it difficult to catch all of the subtle jokes he wryly stashes away in his responses. We spoke shortly after he had returned from a trip back East, researching a new piece about the tax code.

What's "unplugged" about the show?

Well, there's no electric instruments. The thing I found to be unplugged from Franklin was any sense of who he really was. He really was a person as opposed to his image, and I was curious to find out more if I could. The thing that drew me in--and that the piece in part focuses on--is his relationship with his son. . . . I hadn't known he had a son! That his son ended up being probably the preeminent loyalist during the Revolution was really fascinating to me.

No, not really. . . . I'm interested in the [American] Revolution, partially because my dad told me I'd lead another one. But I'm interested in becoming more connected with history, and it appealed to me that I could do it through this person. Or I could try, through this guy who turned out to be so protean. He was involved with so many aspects of what happened in America that it turns out I'm really glad I met him.

Originally I was going to do a show where I was going to play Ben Franklin, like Hal Holbrook [playing Mark Twain], but I quickly found that that wasn't my thing.

Would Ben Franklin have made a good monologist?

I'm not sure. I did what, for me, was voluminous research on him, but of course I'm not a Franklin scholar. But from what I've read, he was actually very shy about speaking in front of others and was very charming personally. But he was really incredible in pretty much every way. He was an incredible swimmer! He's in the [International] Swimming Hall of Fame. You find out some things when you start researching Franklin.

He invented the grabber, the thing where if you're in a grocery store and you want to reach for a high shelf and then you have that thing and you squeeze it, and it sort of has, like, an R2-D2 kinda hand on it--he invented that. That's pretty cool. I mean, aside from the American Revolution and stuff like that . . . the grabber! That's neat.

A monologist like me is sort of self-focused and talks about himself all the time. Franklin, in a way, was kind of a reverse. In print he used at least a hundred aliases, and that's also an interest, how he would take on other characters and seem to be comfortable with them--including, I think, the character of Ben Franklin, ultimately.

It seems like Ben Franklin is a figure we sort of forget as we grow older--like in grade school, we learn about the guy who flew a kite and did Poor Richard's Almanack and all, but the effect he had on the shaping of our country never really sinks in. Does our Franklin awareness go downhill?

Lately, *NSYNC has done so much more, so I think they get a lot more attention. Although I believe, even though I'm not an expert on *NSYNC, that Franklin wrote his own stuff.

The relationship to history is very strange. I myself am a Jew and my grandparents came here to America, and yet I feel the connection, though it's sort of vague, to the Founding Fathers and to historical figures like Ben Franklin. Why? That's really sort of weird to me.

Did you notice any similarities between Franklin's ideals and your own communist upbringing?

Near the end of the piece, I make that claim. It took me the whole journey that I take the audience with to get to that point, because he would seem to be about as far away from my left upbringing as you can imagine. It's partly just my bias too, I'm sure.

Franklin was raised a Puritan, and there's a lot to be said about the connection between the American Puritans and the American communists. I don't think enough has been done on this scholarship. . . . I'm just kidding about that. I don't think that anybody gives a shit.

But there is a lot of connection to me, for real. What my parents were about, especially my father, was making the world better. They talked about living a life that was moral and ethical and helped people, and the Puritans did that as well. That was a big part of Franklin's upbringing. But there was something about trying to do good, and the shining city on the hill . . . it's very utopian.

But one difference between my parents and Ben Franklin--well, there are a number of similarities: both Ben Franklin and my father liked to run around nude in the apartment--one thing that really struck me is that Franklin really went through a revolution, and my parents talked about one. Franklin went through it and had a lot to do with it.

When I was growing up, revolution for little communist kids was very glorious--the idea of it, the songs and the slogans. But the actual revolutions are incredibly painful and difficult for the people who are revolting and being revolted against too, probably. The energy to make a revolution is really violent and strong and angry, and how do you deal with that?

This isn't part of my piece, so it isn't helpful at all, but it's really interesting. I guess how important it is to--and I think Franklin's really good at this--to emphasize to people how, after the revolution had happened, the continuities and traditions that were not violent.

Total change of subject, but do you use any props in the show?

It's my most prop-laden show ever. I have a desk, a rolling chair, and about four cardboard boxes. I bring actual Franklin books with me, an also some letters that my mom sent me when I was a teenager.

There tends to be a lot of smooth jazz and chamber music in Napa Valley. A little Josh Kornbluth seems like a welcome change of pace.

If it's not going well, I could just bust into a Kenny G thing. I guess I'd have to get some hair plugs.

Hmm. Maybe that's why it's unplugged.