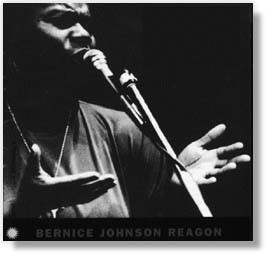 ENJOINED BY THE GIFTS of breath . . . we plow the path forward with sound," Sweet Honey in the Rock founder Bernice Johnson Reagon wrote in the liner notes of that group's 1993 release Still on the Journey: The 20th Anniversary Album (Earthbeat!). "And it is a path we travel, lit by the chatter of the ancestors."

The following year, Reagon--one of the most powerful voices in African-American traditional music--chose to leave that Grammy-winning a cappella women's ensemble. These days, she rarely performs on stage, but is nonetheless paying heed to the "chatter of the ancestors." And Reagon--a recipient of a 1989 MacArthur Foundation "genius grant"--continues to nurture the rich cultural legacy she first encountered 55 years ago as the Georgia-born daughter of a Baptist preacher, weaned on songs of political struggle closely tied to the lives of Southern blacks during the turbulent '60s.

As curator emeritus of the Smithsonian Institution's National Museum of American History, Reagon has supervised the release of three important new Smithsonian/Folkways recordings that showcase that connection.

The most ambitious is Wade in the Water: African American Sacred Music Traditions, a four-CD boxed set released in conjunction with the new Smithsonian Institution traveling exhibition by the same title and curated by Reagon. The 67 tracks--arranged in four volumes devoted to choral spirituals, gospel composers, congregational singers, and community gospel choirs--were culled from Reagon's 1994 Peabody Award­winning NPR series, for which she served as conceptual producer and host. Reagon also researched, wrote, and edited the extensive historic liner notes for the box set, along with scholar Lisa Brevard.

These soul-stirring selections tell the compelling story of African Americans moving out of slavery and into freedom. Those often highly personal tales, as Reagon describes in the liner notes, are punctuated by the cries, moans, shouts, and hallelujahs "of a people rising and falling as we moved beyond our shackles."

Quite simply, the collection is one of the finest expressions of American music ever compiled. It traces the evolution of black music from the post­Civil War Reconstruction period--when the Fisk Jubilee Singers began touring to raise money for their landmark black college and became the first internationally renown African-American vocal artists--to the rollicking sacred music of the Bible Way Temple Radio Choir and other community gospel groups.

It is a spirited baptism for aficionados and the uninitiated alike.

The first volume, African American Spirituals: The Concert Traditions--with haunting European-style harmonies and arrangements that serve as a soothing balm to such classic songs as "Wade in the Water," "Sometimes I Feel Like a Motherless Child," and "Swing Lo' Sweet Chariot"--alone is worth the price of admission.

For Sweet Honey in the Rock fans, Give Your Hands to Struggle provides a glimpse into the genesis of that much-heralded group. Originally released in 1975 on Paredon Records, this stunning solo album features Reagon riffing on her own powerful vocals through multitracked harmonies prescient of the arrangements she would soon employ with her vocal ensemble. The songs (including one previously unreleased track) were written at a time when many in the civil rights and anti-war movements had grown disillusioned. They reveal a committed artist fully embracing the marriage of political action and music--and stubbornly refusing to succumb to the apathy that had sprung up around her.

Voices of the Civil Rights Movement: Black American Freedom Songs, 1960-1966 is a two-CD collection showcasing the role African-American musical culture played in shaping the course of the civil rights movement. Reagon, then an activist songleader and a member of the SNCC Freedom Singers, succinctly describes these works as "new music for a changed time."

Like summer lightning on a humid Georgia night, these highly charged recordings--some made in the field and reflecting the new words and phrases coined in the midst of the volatile Selma marches and other confrontations--literally crackle with fiery passion.

From the March 6-12, 1997 issue of the Sonoma County Independent