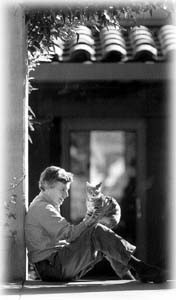 THE BITTER TASTE of mortality hung in his throat. Bernie Krause huddled in the cabin of a New Zealand coast guard cutter, sailing to Antarctica through stormy South Pacific seas. The small cabin, perched at the stern near the engine room, lurched violently as huge waves buffeted the ship. He couldn't eat. He couldn't sleep. And using the toilet was like peeing into a coffee can while riding a roller coaster. The acrid smell of vomit and diesel exhaust wafted through the cabin, contributing to the roiling in the pit of his stomach.

Nature wasn't giving up its secrets easily as Krause ventured back to the southern continent to record the sounds of whales, seals, and penguins.

In search of relief, Krause staggered from the cabin, only to be greeted by daunting 40-foot walls of dark gray water that came one after another, crashing on deck and threatening to break apart the ship. "It was the most terrifying experience of my life," recalls Krause, who now lives in the green hills above Sonoma. "It took me two weeks to stop shaking."

But Krause's tribulations had just started. Shortly after recovering from the sea voyage, he learned firsthand about Antarctica's legendary cold during a brief jaunt outside the research station where he was staying. Five seconds after he stepped out of the station's airlock, against the advice of the resident scientists, the subfreezing air--174 degrees below zero--crystallized the viscous fluid of his eyes, lacerating the corneas and sending Krause to sick bay for several more weeks.

"You learn real quick," says the soft-spoken naturalist and sound recordist of life in the wild. "Real quick."

SOME OF THOSE LESSONS are included in Notes from the Wild: The Nature Recording Expeditions of Bernie Krause (Ellipsis Arts, 1996), a fascinating collection of words and sounds. The new 95-page book offers lively, insightful accounts of his exploits through entries from field journals and--thanks to a companion compact disc--excerpts from field recordings he has made of wild animals and their habitats.

"I wanted to give the reader a sense of what it's like to record and to experience the world from an aural texture rather than from a visual texture," he says of the decision to release a book/CD project. "We are very much a graphic culture, but in ancient cultures, the aural cues are much more balanced with the graphic. Because my eyesight isn't particularly great, I hear the world, I don't really see the world as other people do.

"That's created an experience in my life that is absolutely powerful to the extent that I almost don't want to do anything else except listen to that voice of natural environments, it gives me so much pleasure."

Krause, 57, is probably best known as the studio wizard who in 1985 lured Humphrey the wayward humpback whale out of the brackish Delta water and back to the open sea. He did it by serenading the languid leviathan with a tape recording of humpback whale sounds. The episode brought him worldwide recognition.

But Krause--a slightly built, reserved man who harbors a real passion for the natural sciences--spends most of his time far from the limelight, recording the grunts, growls, hoots, and howls of wildlife in their natural surroundings. He captures the ambiance of rain forest and desert, meadow and marshland, by taping animal sounds uncorrupted by human ones--or trying to. In the past decade, he has released a series of nature recordings for the Nature Company and on his own Wild Sanctuary label. His fanciful 1989 recording Gorillas in the Mix (Rykodisc) used digitally sampled animal noises to create a jungle of jazzy beats. Krause is now creating complex soundscapes for a new Disney theme park in Florida and a Native American museum in Massachusetts.

But capturing the sound of the wild is a challenge these days: the pounding beat of oil drills travels 70 miles in Alaska's thin Arctic air; the shrill buzz of chain saws ravaging the Brazilian jungles drifts 20 miles; and the auditory wake of airplanes and helicopters is everywhere. In 1987, Krause spent two months in Africa recording the sounds of Dian Fossey's endangered mountain gorillas. "I got 15 minutes of usable tape out of 500 hours in the field," he says, explaining that within earshot of gorillas feeding in the small Rwandan nature preserve are ghetto blasters pumping out rap, the shouts of nearby villagers, and the sounds of domestic animals.

Krause has been likened to a botanist collecting the auditory seeds of species destined for extinction. That's an accurate description; he notes that of the 3,300 hours of natural sound he has recorded since 1968, 20 percent of his tape library comes from now-extinct habitats. In his new book, Krause poignantly illustrates that point by pairing two journal entries: the first, from June 1989, describes the serene beauty of Lincoln Meadow in the Yuba Pass in the High Sierras; the second, from April 1996, chronicles his return to find the nearby woods clear cut, the stream muddied, and the songs of the birds and frogs all but silenced.

"It's like missing an old friend," Krause says of the personal toll exacted by such grim discoveries. "You find something that gives you some sense of a spiritual place--some sense of solace in the world--but then you almost feel violated when you return to find that as human beings--as a tribe, as a race--we've become so desensitized to the extraordinary beauty in these places, which really speaks to us in a spiritual and a psychic way. As a result, we find ourselves with a void in our lives because we've allowed this to be taken away from us.

"We're all part of that process."

For Krause, that loss is powerful motivation to get the word out. "I'm hopeful that we may stop being so destructive in our living and our lifestyles--I mean, America is 5 percent of the world's population and uses 60 percent of the resources--but until we're prepared to stop that, I don't think much is going to change," he says. "I think that it's going to get a lot sadder and a lot more stressful to live because there won't be any place left to go for a respite.

"So while I am hopeful, I am not optimistic."

Bernie Krause will give a reading and play excerpts from his field recordings at 7:30 p.m. on Tuesday, Feb. 25, at Copperfield's Books, 650 Fourth St., Santa Rosa. Admission is free. To learn more about his work, visit his website.

From the February 13-19, 1997 issue of the Sonoma County Independent