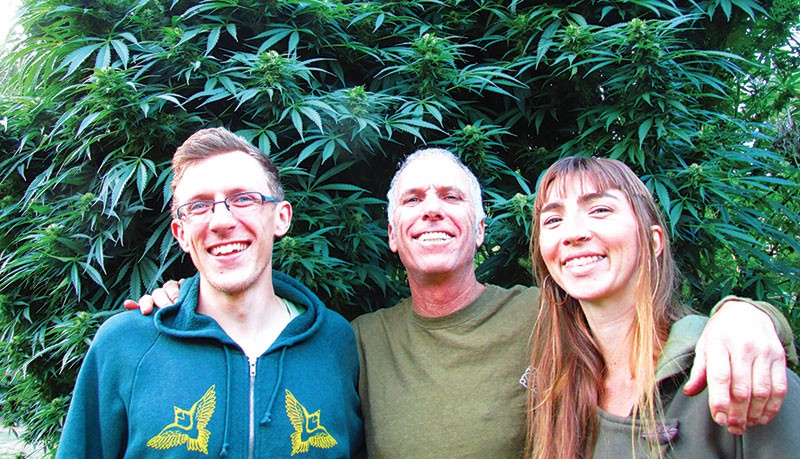 As a "cannabis farmer"—those are his words—and flamboyant marijuana showman, Tim Blake walks a fine line. For the last nine years, between his tending and harvesting of bountiful crops, he's produced the Emerald Cup, a dog and pony show for Mendocino County's pot growers. Now, he's bringing the Cup from the backwoods to the big city. The Emerald Cup runs Dec. 14–15 at the Sonoma County Fairgrounds.

Part cannabis circus, part down-home county fair and part tribal gathering for an industry on the cusp of respectability that still clings to its outlaw trappings, the Cup will bring growers and fans from around the country for the longest running marijuana competition in the state.

Blake and his cohorts aim to give cannabis a near total makeover, even as they're keen to hold on to venerable pot traditions such as passing a joint and getting stoned. "That's a God-given right," Blake tells me from his home in Laytonville. "Now we've got to clean up the industry, get rid of polluters and criminals, and make it perfectly legal to smoke a joint and get high."

At the 10th annual event this week, competition will be fierce in three categories: best cannabis flowers, best concentrates and best photos. This year, the Cup received over 50 concentrate entries and over 250 flower entries, up from 200 in the 2012 competition. Grand prize for the first place winner for flowers is a two-week all-expenses paid vacation in Jamaica.

Blake's rules stipulate that the cannabis in the competition must be cultivated organically, under the sun by environmentally friendly folk who wouldn't think of harming Mother Earth. If that sounds like a throwback to hippie days, it might be because Blake's grassroots go back to the 1970s, when he moved from Santa Cruz to Mendocino, bought land and began to grow marijuana as a back-to-the-land hippie-outlaw with a very low profile.

Six years ago, Blake stormed out of the cannabis closet to advertise his habit and promote the industry. He's not a holier-than-thou crusader, but he wouldn't mind it if every "head" in California came out for the Cup at the Fairgrounds. Of course, no one's a "head" anymore. Everyone's a patient, suffering from anxiety, depression, insomnia and any number of ailments. Blake's a patient and so is his co-producer, Samantha Mikelojewski, 26, who cultivates cannabis and uses it for anxiety. She started to smoke at 13.

At the Cup, patients like Mikelojewski and Blake will be able to take their medicine if they produce a recommendation from a physician, such as Jeffrey Hergenrather, the legendary Sebastopol pot doc who grew it when he was a student at UC Berkeley, and who has practiced for so long that the sons and daughters of his original patients show up at his office for recommendations.

Hergenrather tops the list of cannabis experts and celebrities at this year's star-studded Cup. Other speakers include Dr. Donald Abrams, who has demonstrated the benefits of cannabis for cancer patients; Steve de Angelo, owner of Harborside Health Center in Oakland, the biggest pot dispensary in the world; and Dennis Peron, the pot activist who drafted Proposition 215, which ushered in medical marijuana in 1996. Still, the event's biggest draw has to be the bands: Jefferson Starship, Big Brother and the Holding Company and Canned Heat. For more contemporary sounds, there's Rebelution, with its mix of rock and reggae, and J Boog, the R&B singer and rapper from Compton.

What's also electrifying about this year's Emerald Cup aren't the old-school guys, but the new-school women: reporter Kym Kemp, lawyer Kyndra Miller and Diane Goldstein, a former California police officer who belongs to the pro-legalization organization Law Enforcement Against Prohibition. "At the Cup, we're moving away from the male-dominated outlaw thing," Samantha Mikelojewski tells me. "We're giving a new face to cannabis and illustrating the contributions of women in all aspects of the industry."

John Hurley, manager of the Mighty Quinn, thinks this year's Emerald Cup marks a milestone for growers, patients and for Santa Rosa, too, as a city with a long marijuana history and very little marijuana transparency. "I'm amazed we haven't had anything like this before in Sonoma County," Hurley says from his sanctuary at the back of the store. "We live in the most liberal area in the most liberal state in the United States, and yet people are still afraid to come out. Paranoia's a tough habit to break."

Born in San Rafael in the 1950s, Hurley smoked his first joint in 1968. He's watched the marijuana scene morph, as growers have moved from outdoors to indoors and from sunlight to artificial light. "Concentrates are the new revolution," he says. "They allow you to take a bulky product and shrink it down, which makes it easier to transport and more convenient for patients to calibrate precise dosage." Hurley and the Mighty Quinn, a major sponsor of the Cup, won't be hawking concentrates or buds, but they'll sell pipes, papers and all the paraphernalia.

Ellen Komp, deputy director of California NORML, the grandmother of anti-pot-prohibition organizations, keeps records of famous women who smoke now or who smoked cannabis in the past: Lady Gaga, Anne Hathaway and Lila Leeds, the actress busted with Robert Mitchum in 1948 when she was 20 and whose career went up in smoke. "Women are coming out of the closet, and that takes courage," Komp tells me. "If you're a mother and you're arrested for cannabis, you can have your children taken away. But women are beginning to say, 'I'm a better parent when I smoke pot.'" She'll be at the Cup advocating legalization.

Born in Pennsylvania, Komp smoked for the first time in 1976. She's only recently come out of the closet. "For years, I was advised not to say anything, and I didn't," she explains. "Then I began to say that I had used it in the past. Now, I'm really out of the closet. I smoke pot medicinally, spiritually and recreationally, and I'm not ashamed."