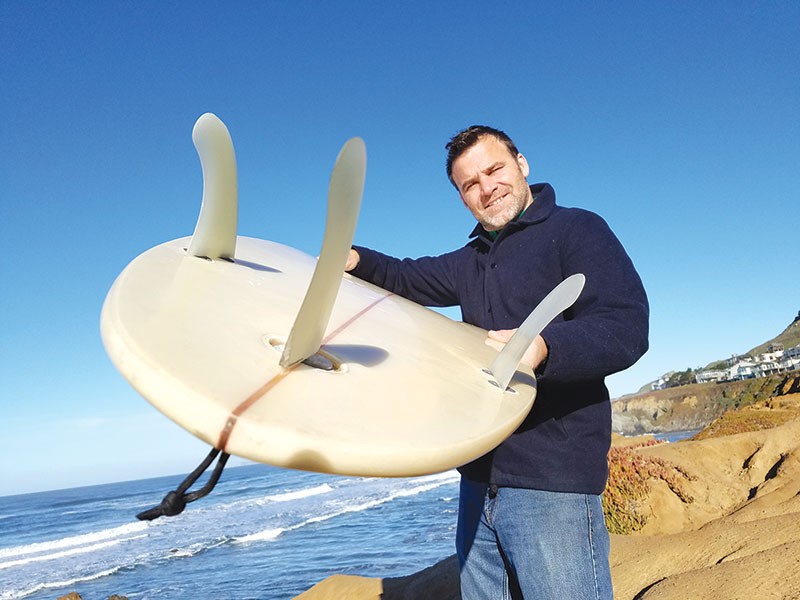 After an evening surf session at Dillon Beach, Klaus Dilling sat in his hot tub for a relaxing soak. As a woodworker and avid tinkerer, he'd been pondering surfboard fin design. Sitting in his tub, an idea popped into his head.

"It was that quintessential light-bulb moment," says Dilling. "I realized in an instant that the center fin could become steerable. The design came to me in that moment."

The next morning he headed into his workshop and set to work.

Dilling lives in Santa Rosa and teaches woodworking at Sebastopol Charter school and coaches soccer at Credo High School (disclosure: I serve on the board of directors at Sebastopol Charter). He built a prototype out of wood and was eager to see how his invention worked.

"Right off the bat, I felt it," Dilling says. "Instantly, I knew it was something worth pursuing."

For the past six years, Dilling has been developing his design, a device he says improves a flaw in modern surfboards and boosts performance. His patent for the fin was approved in September.

Most modern surfboards use a three-fin system: one center fin and two smaller side fins. The side fins are toed in slightly relative to the center fin. That helps hold a board on a wave, but creates drag and a slight snowplow effect as a surfer glides over the water.

Dilling says he's solved the problem with a foot-activated tiller that pivots the center fin a few degrees during a turn to align with the side fin that's making the turn, to create what he says are turns with more speed and flow. When the turn is complete, the center fin snaps back into place. He calls the design the TunaFin, and says it "just cuts through the wave cleaner and faster. It's not really open to debate. It is a fundamental truth that less drag equals more speed."

Brad Sykes, a surfer and product developer from Marin County, hasn't seen or tested the latest model of the fin, but he's excited about Dilling's invention.

"The fin is an area that needs a lot for evolution and his fin is really radical," he says. "I really think it's going to go somewhere."

The design is admittedly nichey stuff that only surfers could love, but since the patent for a key fin design recently expired, Dilling hopes his innovation will be the next big thing in the $7 billion U.S. surfing industry.

After countless iterations and design changes (it's made with fiberglass and PVC fittings now), Dilling has retrofitted many of his old boards with the fin system, as well as having his brother, who shapes surfboards, make him new boards using the TunaFin.

"It has helped keep me going all these years," he says, "because every time I ride one it's like, 'Wow.'"

The Southern California–based surfing industry can be hard for newcomers to break into with new concepts and products. So what chance does Dilling have way up here in Santa Rosa? He'll soon find out. He's launching a Kickstarter crowdfunding campaign later this month to raise money for a fleet of demo boards that he wants to take on a tour of West and East Coast beaches next summer to give surfers a chance to try them.

"It could well be the next big thing in surfboard design," he says, "but I don't know where this whole thing is going to lead."