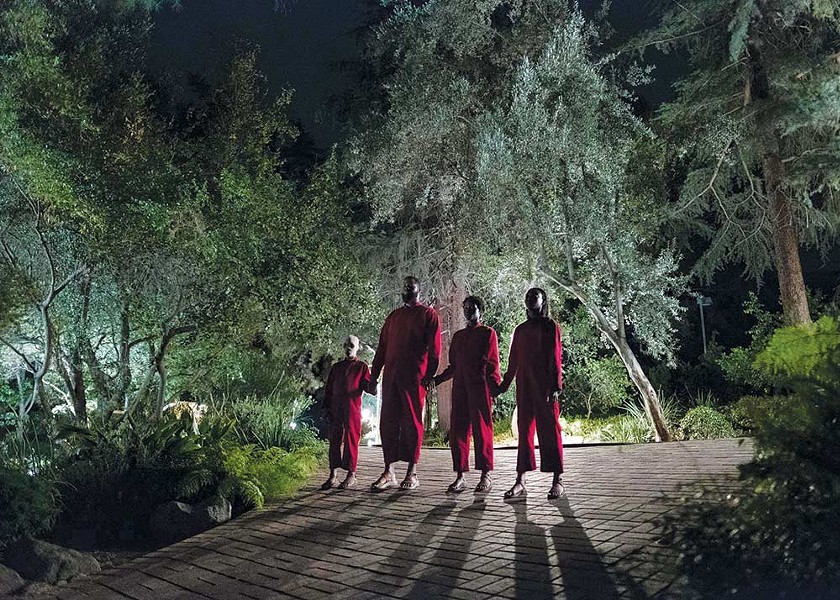 The top 10 films of 2019, in alphabetical order: The Big Hack, Captive State, The Irishman, Jojo Rabbit, Joker, The Lighthouse, 1917, Once Upon a Time...in Hollywood, Parasite and Us.

"We're Americans. Get the rope."—Us

"You're Americans. Just barge on in."—Midsommar

Such is my country these days. We seem to be Rotvalla-pissers one and all, like the chump in Midsommar who wees on the sacred, dead ancestral tree of the Swedes.

This year's cinema was heavy on stories of the immured (Parasite) and the entrenched (1917). In 2019, even Captain America said, "To hell with this, I'm heading for the past."

In Jordan Peele's eerie parable Us, America isn't filled with just the rich and the poor, but with the influencers and the influenced. His story of the hordes in their government-funded Plato's Cave isn't easily picked apart. Yet it does merit space next to the business of the grateful, kowtowing subterranean lodger in Bong Joon-ho's uproarious Parasite, a movie composed with Hitchcock-ian perfection.

Captive State demonstrates what a real occupation and a real resistance looks like, with alien overlords dwelling in their own cellars. The Great Hack was another type of horror story of rats in the walls, a terrifying documentary about the kind of manipulation of social media that overthrows governments.

An escape from the present, Once Upon a Time...in Hollywood is, on this list, not like the others. It's not just edgeless nostalgia, but an irreplaceable vision of L.A. as a mecca that distingerates under people's feet. It's the glittery version of Scorsese's masterful vision of the blandness and crookedness of mid-century America, The Irishman.

Jojo Rabbit took its own liberties with history, even with its own Anne Frank concealed in the attic—maybe it's a measure of the shocks we're enduring that the funniest movie of the year had the gallows in it.

By contrast, Robert Eggers' glorious black-and-white The Lighthouse is lighter, in a dark and horrible way. It's based on the lovely old Down East joke with the punchline, "Oh, don't dress up. There's only going to be the two of us." Whether we like it or not, in the lighthouse America, there's no "them or us," there's just "us."