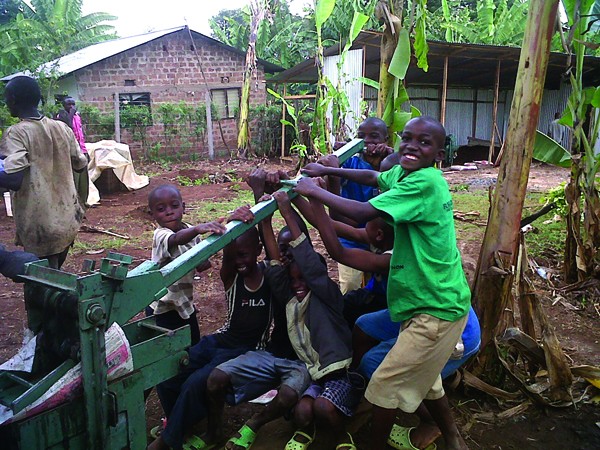 When Jackie Weiss returned from a six-week volunteer stint at the Tuleeni orphanage in Moshi, Tanzania, she did so with a slew of memorable stories. But her favorite involves a 12-year-old orphan named Denis.

"Most Tuleeni teens receive a piglet (if they're male) or a chicken (if they're female) in order to learn responsibility, and to raise and earn their own money," says Weiss, a Santa Rosa resident and SSU graduate who grew up in Southern California. "Most of the orphans end up selling their pigs once they are big, but Denis raised his to have piglets." Denis then sold the piglets, Weiss says, "and then bought himself a bike."

While the purchase of a bicycle might not seem like a big deal, in one of the poorest economies in the world, a bike can make all the difference.

Over coffee, Weiss describes her experience at the Tuleeni orphanage where she worked in the afternoons, tutoring and hanging out with the children. According to Weiss, Mama Faraji, the head of the orphanage, spends $36,000 a year on school fees for kids who live in the crowded facility and for others who live with extended family members in the community. Realities like that stuck with Weiss, and when she returned to the States, she began looking for ways to continue working with the orphanage.

"Anybody who goes there and meets them, even for just one day," she says, "it's gonna change your life."

Eric Nelson, a student from Montreal, contacted her soon after, suggesting that they plan a fundraiser to raise money for Tuleeni. He wanted to buy land and help build a new facility to replace the crowded, infertile acre plot of land where the children now live. "He had the idea, and we just went full-force into it," says Weiss. "We had no idea of the scope of what we were getting ourselves into."

Since 2008, the group called Help Build Tuleeni a Home has gained fiscal sponsorship through Global Exchange of San Francisco, and they've raised enough money—about $20,000—to purchase an acre of land in Uru, Tanzania. The official groundbreaking happened in March; Weiss says they need at least $150,000 more to complete construction on a sustainably oriented orphanage with capacities for rainwater catchment, fish ponds and the raising of livestock, in addition to housing for about a hundred children. Weiss is helping to organize two fundraisers, one at Stout Brothers in Santa Rosa on Friday, May 25, and another at the Last Day Saloon on Saturday, May 26.

The effort remains small, basically the work of four people, including one who is a member of Christian charity organization Hugs for TU.G.S. Unlike Invisible Children, the group behind last year's controversial Kony 2012 social media campaign who were called to task for their high staffing fees, 100 percent of the money Weiss' group raises goes to the orphanage effort.

"That's our thing—every dollar really truly does make such a huge difference," she explains. "And education for an orphan makes every difference. We're hoping that as the years go on, they'll become leaders and they'll help make a difference, and it will grow past that small area, it will branch out."

Hundreds of miles northwest of Tanzania lies the Republic of the Gambia. In 1999, Santa Rosa musician Steve Pile traveled there to study the kora, a 21-string mandinka harp with respected teacher and master player Jali Bakary Konteh. Ten years later, Pile returned to West Africa to record Konteh, with two solar panels and a laptop. The two men hatched plans for the Konteh Kunda School of Music, a place where Mandinka culture and history would be preserved through musical mentorship and an audio library of stories, songs and oral history.

Having raised $11,500 in online donations, Pile says walls for the school have been constructed. Next, they'll put on a roof before the rainy season begins. "We've definitely got the whole thing kick-started," he says, though the next step is to find more funding to be able to finish the project.

Pile says that to some, Africa might seem like a faraway place to invest so much energy. But "it's not as distant as it seems," he explains. "I love the music, and I feel like I want to help preserve it and make it known. It's not a huge leap to put my energy towards that, as opposed to trying to preserve my Anglo-Saxon folk tradition. My culture has already been well-documented."