BottleRock Napa Valley happens Friday to Sunday, May 25–27, at the Napa Valley Exposition, 575 Third St., Napa. 11:30am to 10pm each day. Sold-out. Get ticket exchange info at bottlerocknapavalley.com. 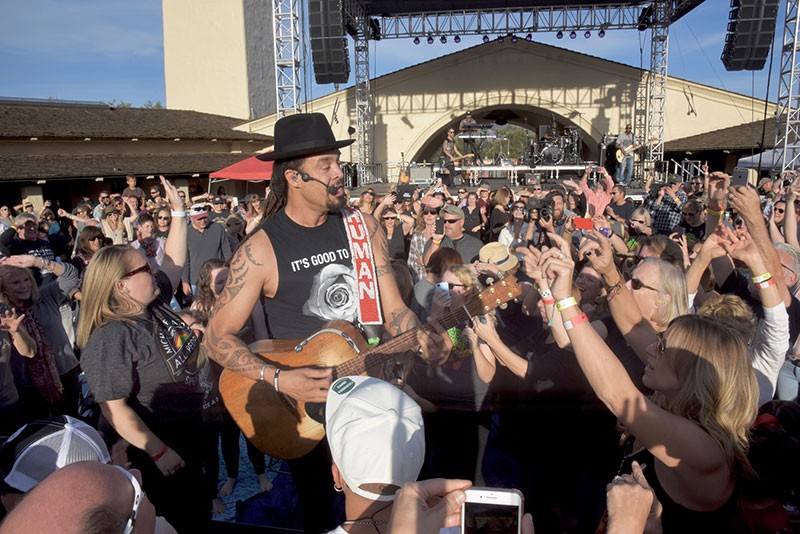 "We had a great a time, and we saw what was special about it if you took into consideration what people think of wine country," says Graham.

The business partners also had no idea that the first BottleRock would end up millions of dollars in debt and that the organizers would file for bankruptcy.

When the annual event bottomed out, Graham, Dragoo and Scoggins bought the assets for the festival under their company Latitude 38 Entertainment, paid off several million dollars of the outstanding debt and set about turning BottleRock into a showcase of Napa Valley.

Twenty eighteen marks the fifth year for BottleRock Napa Valley under Latitude 38's direction, and tickets to the three-day music, food and wine experience–happening May 25–27 and featuring headliners Bruno Mars, the Killers and Muse–sold out faster this year than ever before.

But BottleRock is more than just a three-day party. Since 2014, Latitude 38 has supported several local organizations like Michael Franti's Do It for the Love Foundation, through the BottleRock brand. Last fall, wildfires in Napa and Sonoma County prompted BottleRock to go into relief-fundraising mode.

"Prior to the fires happening, we were in the thick of planning the festival," says Graham, whose family evacuated from his home in the middle of the night and stayed at the Napa River Inn. "We knew immediately that we needed to figure out how to help."

In addition to donating supplies and promoting other fundraisers, BottleRock hosted three North Bay concerts at the end of 2017, featuring Franti at Robert Mondavi Winery in Oakville, Counting Crows at the Green Music Center in Rohnert Park and Train at the JaM Cellars Ballroom in Napa. Those shows raised $422,000 for the Napa Valley and Sonoma County community foundations, the North Bay Fire Relief Fund and NomaGives.

"BottleRock Napa Valley is their bread and butter, but their effort to make meaningful community contributions is their pride and joy," Napa Chamber of Commerce president and CEO Travis Stanley writes in an email. "That was again on display immediately following the recent fires."

"We're all about our community," says Graham. "What makes us most proud is that our community is proud to be associated with BottleRock."