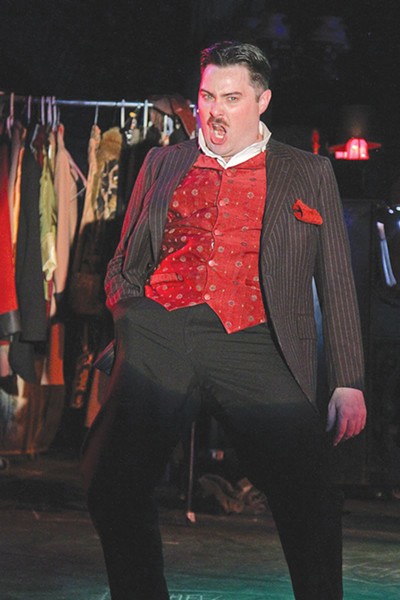 Bertolt Brecht's 1928 "play with music," The Threepenny Opera, is like an expensive dessert that's so filled with flavor most people can't quite figure out how to enjoy it. Brecht was never interested in entertaining his audiences. He wanted them to stay a bit uncomfortable, to remain just distant enough from their emotions to be always thinking about what the play actually means.

I'd say that, for most people, the only significant obstacle in 6th Street's thoroughly effective and often delightful production of Threepenny Opera is that in the end, it's still The Threepenny Opera, a fascinating choice for 6th Street, where its musicals have tended, of late, toward the safe and predictable.

The story is set in London in 1937, and plays like a Victorian version of The Rocky Horror Show. It's gleefully sexy and aberrant, and joyously contemptuous of those too sensitive and proper to sit and watch a dark, twisted, tune-filled show about the seedy underbelly of society.

The show's best-known song ("The Ballad of Mack the Knife") is presented in a gothy prelude by an accordion-playing street singer (a first-rate Shawna Eiermann), after which the plot-heavy story introduces Mr. and Mrs. Peachum (Robert Rogers and Eileen Morris, both excellent). The Peachums oversee a network of robbers and thugs, rivaled only by the vicious, knife-wielding Macheath (a wonderful Jerry Lee, singing beautifully while looking like a cross between Charlie Chaplin and Gomez Addams).

When Mack secretly marries the Peachums' daughter, Polly (Molly Larsen, adding yet another excellent voice to the cast), things get complicated. For adventurous audiences willing to take their tea with a bit of arsenic, this energetic anti-capitalist fable is served with enough style to keep you smiling, even as it sends you out of the theater thinking hard—and perhaps just a little unsettled.