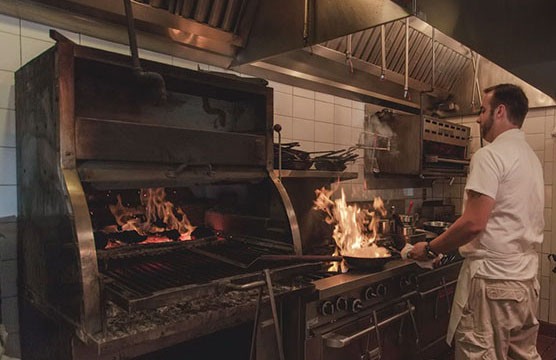 K&L Bistro didn't just triple in size; it tripled its appeal. The Sebastopol restaurant reopened in May after an extensive remodel that upped its footprint to 3,200 square feet.

The old K&L was a beloved restaurant, but let's be frank: it was cramped and got stuffy and noisy when it was crowded, which was often. But now there's room to enjoy a meal without someone's chair bumping into yours. The kitchen is bigger now, too.

The old dining room has become a lounge boasting a long and beautiful copper-topped bar with an oyster-shucking station at the end. The bar is not only a beauty, it's loaded with a great selection of lesser-known booze. I'm a fan of mescal, and it's great to see a few choices here. Fidencio mescal goes into La Palabra ($10), a cocktail made with housemade habañero simple syrup and chocolate bitters.

The lineup of craft brews on tap is worth a stop too. If it's still available, check out Galaxy, a white IPA from Anchorage Brewing made with a touch of brettanomyces and subtle hints of kumquat, cumin and white pepper. It's a very food-friendly brew.

Complementing the new bar is an eclectic bar menu that breaks from the Mediterranean-leaning lunch and dinner menus. Look for the taco of the day ($3), Korean fried chicken ($8), a kimchi-topped hotdog ($7), chicken liver mousse ($10.50) and even steamed pork buns ($8).

The handsome bar, deep list of libations and food menu have made the restaurant into the nighttime hotspot it never was, though its menu of bistro classics remains the same. There are no fancy foams or postmodern deconstructions on a plate here—just a menu of dependable standards that succeed on the basis of quality of ingredients and execution. You've no doubt had French onion soup gratinée before, but K&L's ($10) might as well serve as the gold standard. The beef broth contains a depth of flavor that only comes from slow-roasted bones and hours of slow bubbling in a large stock pot. It's as good as it gets.

When I reviewed K&L two years ago, I loved the simplicity of the sole meunière ($23.50), and it's just as good today. Consistency can be hard to achieve with cooks coming and going, but this dish is a testament to co-owner Lucas Martin's training of his staff.

The impeccably fresh fish comes from Bodega Bay. The basic white-wine and butter sauce lets the sweetness of the fish shine. The house-cured Monterey Bay sardines ($11.50) are another dish I remember fondly last time that was just as good this time around.

K&L is also known for it boudin blanc sausage ($21), and for good reason. The aromatic, juicy sausages are wonderfully flavorful, but what got me is their light, cut-with-a-fork delicacy. The accompanying apple endive salad and crisp fries round out this local favorite.

While it's a far cry from traditional, the watermelon and pork belly salad ($11.50) is a good addition to the menu. The refreshing sweetness of the melon is a great foil to the meaty chunks of pan-fried pork belly. A star anise vinaigrette and spicy pepitas complete the frolic of flavors.

I wish there was a better list of wines by the glass. Better are the wines by the bottle, which include a few hard-to-get local standouts like Radio Coteau and Littorai.

Bigger isn't always better, but with the new K&L, it is.