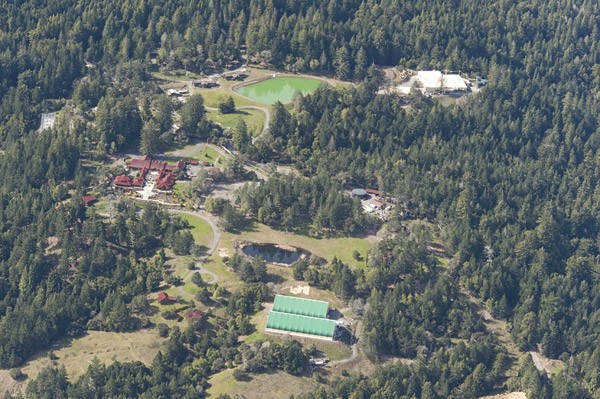 The Ratna Ling retreat center sits on Hauser Bridge Road, on a remote ridge overlooking an arrestingly beautiful slice of the Sonoma Coast. Tucked within the hilltops of a redwood forest, it appears as an ideal location for spiritual retreat from the secular world. Here, retreatants take meditation and Kum Nye yoga classes, eat vegetarian meals and volunteer with the printing and shipping of Tibetan and Western spiritual texts on large-scale printing presses.

But all is not peaceful in this isolated, rural section of northern Sonoma County. The ridge is the site of an eight-year battle between a close-knit community and Tibetan Nyingma Meditation Centers, the organization that purchased the former Timberhill Lodge in 2004.

As the county prepares an April 5 hearing on an expanded permit for the center, neighbors charge that Ratna Ling has violated its existing use permit, and any decision in favor of expansion for the center's Dharma Publishing wing would create a precedent for industrial use in this quiet natural region. Also, neighbors say, expansion would increase traffic on the county's fragile rural roads that, as a non-taxpaying entity, Ratna Ling technically does not pay to upkeep. Further, some say that the environmental impact of recent construction—and the subsequent friction caused in the community—would seem to go against Buddhist beliefs.

The larger question, and one raised by Carolyne Singer of Coastal Hills Rural Preservation, a group opposing the expansion, is why Ratna Ling bought property and moved its printing presses from Berkeley where it had operated for 30 years with the knowledge that the Sonoma County location was not legally zoned for such use.

"Ratna Ling knew it was a rural resource zone when they moved up there," says Singer, whose group has gathered 170 signatures opposing the expansion. "They knew the limitations before they moved the whole Dharma press up there, so it shouldn't come as any surprise to them. But part of their religious practice is that if an obstacle arises to any goal, they must surmount it."

Printing books is also a part of the Nyingma Buddhist tradition. Founded by Tarthang Tulku, the mysterious lama who lives across the hills at Odiyan Retreat Center, outside of Gualala, the organization's work practice is based on the exiled Tibetan's life's work of preserving sacred art and texts. Ratna Ling's 21,234-square-foot press produces Tibetan books, prayer wheels and other goods that are donated to Tibetan refugees in India and Nepal; Ratna Ling also produces Buddhist materials sold at a profit to Western audiences.

Despite a 2004 permit allowing the printing as a nonprofit ancillary to the location's primary use as a retreat center, Singer believes that "they clearly are not running the retreat center as the primary operation," citing the size and scale of the printing press.

Frustration grew when Ratna Ling applied for a new use permit that requests a modification of the master plan to add eight seasonal cabins, four new storage buildings for the residential cabins and one six-guest retreat house on a separate parcel, in addition to making permanent the currently temporary 39,000 square feet of accessory storage buildings. The application also includes a request that current restrictions on the number of books printed annually be lifted, since in the Tibetan Buddhist tradition, a book can be a slim volume, similar to the book of Genesis in the Bible.

Singer lives with her husband about a mile south of Ratna Ling, on land they purchased over 40 years ago. Their group spent six months researching the center's operations, resulting in a two-inch binder of photos, documents and other information submitted to the county as a complaint of permit violations in 2010. "The code-enforcement people said they had no idea this was going on," says Singer.

Since purchasing the land, all Dharma printing operations have been relocated from Berkeley, a move that baffles Singer, since the East Bay location provided access to industrial zones and close proximity to shipping ports.

Retired attorney Curtis Caton is Ratna Ling's legal consultant for the new permit application. He says that it shouldn't be necessary to "indulge" the expense of a complete environmental impact report, as some neighbors are requesting, when the county has already declared a mitigated negative declaration in terms of the press' environmental effects.

"There's never been a complaint that the press makes noise," says Caton. "The press can't be seen from the road. It's out of sight and it's out of hearing, and it doesn't make an impact. And it's been functioning that way under the permit since 2004."

He points out that the Permit and Resource Management Department staff studied the issue for a year, concluding with a comprehensive report that "basically endorses as appropriate use of the property everything that we've asked for."

Caton notes that Ratna Ling is making concessions to the demand for less traffic on the road by limiting supply-truck trips to one per day, and by promising that trucks be no longer than 24 feet. "The overall effect," he says, "is a reduction of the impact to the roads."

The press was moved from Berkeley in order to seamlessly link the retreat experience with the creation of the sacred texts, says Caton. A key element to the use permit is that the printing press is intrinsic to the Buddhists' spiritual practice; according to the Resource Management report, "places of religious worship, lodges, schools . . . are uses allowed in the resource and rural development zone land use designation."

Though the center's neighbors are aware of the religious function of the printing press, Singer says that "it's not a hand-done process; it's on an industrial scale. They have supporters with very deep pockets, so they've been able to afford this."

Jason Liles, a member of the planning commission, toured Ratna Ling and spoke with members of the Coastal Hills Rural Preservation in mid-March as part of his preparation for the permit hearing this week.

"The neighbors that are most concerned live the closest," says Liles. "I think that they've been feeling inundated over the last few years, mostly over the construction."

On a wider scale, locals still feel the sting over approval of the area's first public tasting room at the Fort Ross Vineyard & Winery. Sudden attention drawn to the historically remote area of the county by Levi Leipheimer's Granfondo, the 174-acre Artesa Vineyards development, the 19,300-acre Preservation Ranch vineyard development and the approval of a new Fort Ross-Seaview wine appellation has caused unease over new land-use precedents for rural development and the county's general plan.

"Folks aren't used to having that much going on from a commercial and industrial standpoint up there on the ridge," says Liles.