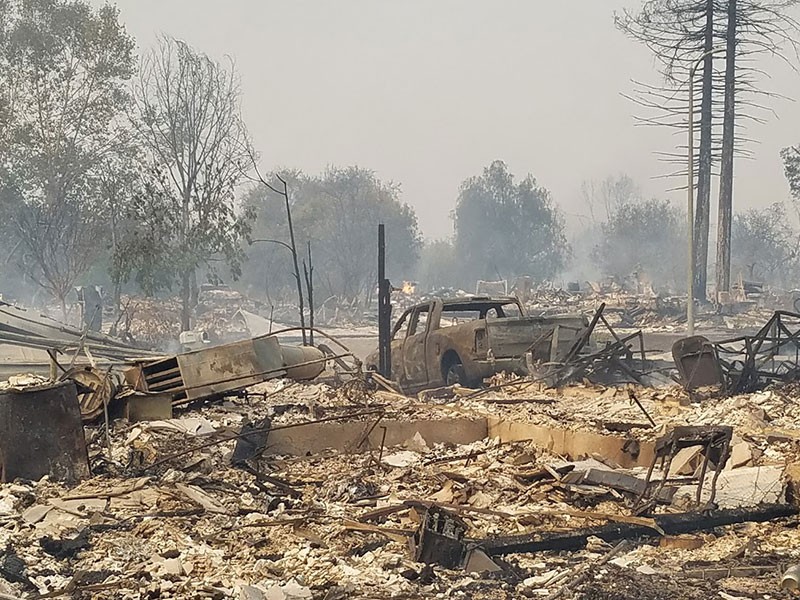 It would be inaccurate to say that the fire-limiting qualities of so-called urban growth boundaries and community separators were vindicated in the North Bay fires.

After all, as Teri Shore notes, the catastrophic Tubbs fire swept through the Fountaingrove neighborhood, crossed the community separator there, jumped into Santa Rosa's urban growth boundary (UGB) and then burned it up.

Shore, regional director at the Greenbelt Alliance, has embraced UGBs and community separators. Urban growth boundaries took root decades ago in places like San Jose, Boulder, Colo., and Sonoma County as part of a new urbanism vernacular of "livable cities," "walkable cities," "resilient cities" and other sobriquets to indicate a civic emphasis on high-density development in order to keep the surrounding lands pristine in their agricultural and biodiverse glory—as they set out to reduce sprawl, not for fire protection per se, but to save farms and communities and local cultures. The community separators indicate the area between developed areas which comprise the urban growth boundary.

It would be a "huge leap to say that the community separator or urban growth boundary could have prevented [the fires]," Shore says. "On the other hand, it could have been worse if we had built more outside of the city boundaries."

In other words, the regional UGBs may have played a role in the fires akin to the "chicken soup rule" when you're sick: in the event of a catastrophic fire, UGBs can't hurt, and they might even help limit the damage to property.

"We're thinking through it," says Shore of the relationship between preventing fires and the rebuilding path forward, and the role of greenbelts in the rebuild.

"I don't know if there's a correlation," she says, "but clearly keeping our growth within the town and cities, instead of sprawling out, potentially reduces the impact from wildfires."

The subject of UBGs comes up for a vote next week as Windsor and Novato go to the polls Nov. 8 to extend the duration of their already-established local urban growth boundaries. Coming on the heels of the catastrophic fires, which only this week were fully contained, the votes in Windsor and Novato (Measure H and Measure D, respectively) are expected to pass with wide margins, but they raise questions about role of UGBs moving forward.

Now that the fires are all but out, reconstruction and development will soon move into the foreground. Last week saw the emergence of Rebuild North Bay, a public-private coalition that aims to create "a comprehensive plan for recovery and rebuilding." It's headed by Clinton-era Federal Emergency Management Agency director James Witt.

In very short order, Rebuild North Bay has found ample support in the local political, media and business class. That's not a big surprise. Darius Anderson has taken a leading role in the organization's creation. Anderson is a Democratic lobbyist, managing partner of the Sonoma Media Group, which owns the Press Democrat, and a real-estate investor through his Kenwood Investments California Opportunity Fund.

Urban growth boundaries are designed to protect against unfettered urban sprawl and keep overzealous real estate development at bay. The knock on the popular UGBs is that by limiting growth within high-density urban zones, they set the stage for exactly the sort of dilemma that Santa Rosa and Sonoma County faced before the fires, and which has now become wildly exacerbated with the destruction of thousands of homes and other structures: housing is scarce and the rent is too high.

That's no reason to dispense with the UGBs, say advocates of the anti-sprawl measures, but rather an opportunity to further leverage their benefits. "Overall, we want to maintain these policies, especially as we move forward and rebuild," Shore says. The UGBs have done their job in limiting sprawl, which is one reason why the Greenbelt Alliance is endorsing the two votes next week.

The unfolding parameters of the regional rebuilding process has itself raised questions of its own about an incipient regional "rush to rebuild" without ample pause to reflect on 21st-century best practices in urban planning or what new best practices might emerge after a raging fire destroyed entire neighborhoods within the Santa Rosa UGB.

The Sonoma County Board of Supervisors and the Santa Rosa City Council have both pushed out emergency ordinances to expedite the cleanup and find short-term housing options for displaced citizens.

"Elected leaders are trying to move quickly to allow people who were immediately impacted to rebuild," Shore says, "and we totally support that." She says she takes comfort that as the rebuilding imperative gathers momentum, no one is talking about building in greenbelts.

As the flames are at last extinguished, the dominant message from civic leaders and the Press Democrat editorial board has been a defiant "Sonoma Strong" posture that says, in effect: We're going to rebuild, we want to make it easy for people to rebuild, and we're going to come back stronger.

But that position has so far glossed over any questions about whether certain parts of town should be rebuilt—i.e., Fountaingrove—and what, exactly, it means to "come back stronger."

As that debate unfolds, Rebuild North Bay has emerged as the go-to organization to lead the charge, as highlighted in a supportive Press Democrat editorial last week that championed Witt as it warned against unspecified "infighting" that might stymie Rebuild's sudden and self-ascribed mandate as top recovery dog in town.

There is an urgency to the recovery, says Shore. "They don't want people to leave Santa Rosa or Sonoma, that's the message now. But there's an opportunity," she adds, "to talk about how we rebuild."

Another new urbanist conceit emphasizes transportation-oriented development. This notion amplified the argument in favor of a build-out of the Sonoma-Marin Area Rail Transit some 10 years ago. At the time, SMART was a big idea whose time had come.

"You could see [the fire disaster] as an opportunity that goes beyond rebuilding what we lost," Shore says, "but that also triggers the next phase of smart growth, now that we have the trains running."