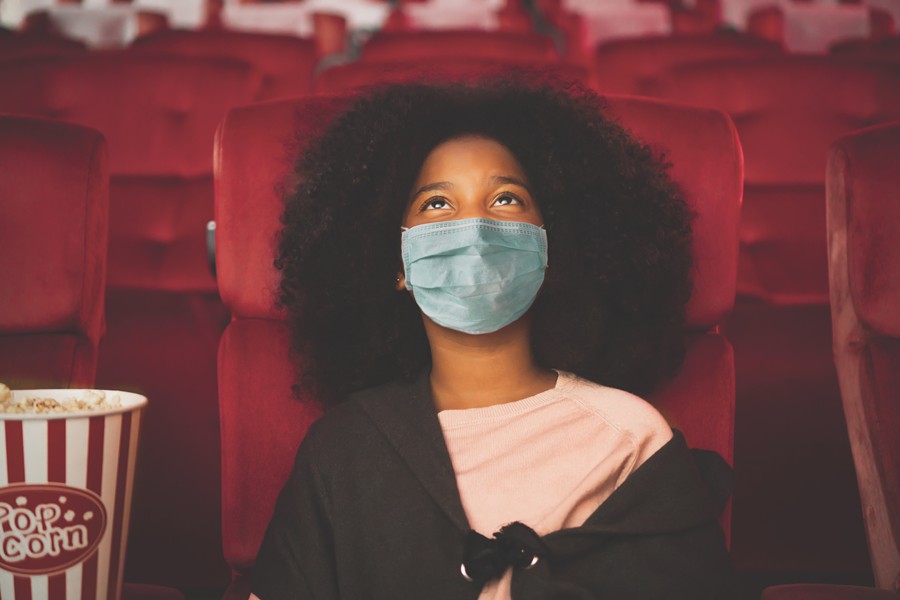 The term “Blockbuster Movie” was invented 45 years ago, when Steven Spielberg’s Jaws (a movie about a deadly threat that shuts down a town) opened in theaters on June 20, 1975. Since then, movies and movie theaters have become as synonymous with summer as the beach or the county fair.

In those 45 years, movie theaters have persevered in the wake of competing forces such as the home video market of the ’80s and ’90s and the Internet Age, where Netflix attracts nearly 70 million subscribers in the U.S. alone. Now, movie theaters, like many other arts and entertainment industries, are struggling to overcome a worldwide pandemic that has kept them closed since March and which threatens to make this the first summer in nearly a half-century without movies.

“We’re all being subjected right now to this ongoing uncertainty that the state of California has when movie theaters can reopen,” says Dave Corkill, owner of Cinema West Inc.

Corkill has been in the theater business for almost as long as blockbusters have been around, and Cinema West’s locations in California currently include theaters in Sonoma County, Marin County, Contra Costa County and Alameda County, all of which are still in the process of trying to safely reopen even as Covid-19 cases continue to rise statewide.

“Contra Costa County just pushed back movie theater re-openings from July 1 to July 15,” Corkill says. “We just got word from Alameda County that they have no indication that movie theaters can reopen any time soon. We’re expecting Sonoma and Marin County to follow suit as they have in the past.”

In addition to navigating the various government agencies responsible for safely reopening the state, movie theaters are also dealing with a never-before-seen wave of Hollywood films being delayed by studios that don’t want their 200-million-dollar movies to play to empty houses. One such film is Christopher Nolan’s Tenet, which was originally slated to open in mid-July. The highly anticipated sci-fi thriller is now scheduled to be released on August 12.

“The distributors depend on a large number of movie theaters, particularly in California, Texas and New York—which are the biggest markets in the country—to reopen en masse so that they can get the kind of return on their new movies,” Corkill says. “It’s an ongoing and ever-evolving process at this point.”

With that in mind, Corkill says that at this time Cinema West is planning and preparing to reopen the theaters they will be allowed to on July 10, but he knows that is likely to change.

In light of the delayed release schedule, Corkill and other theater owners are also positioning themselves to screen classic movies in the first weeks they are open.

“We’re in a holding pattern,” says Allen Michaan, owner of Oakland’s historic Grand Lake Theatre. “We’re waiting for the future, we’re waiting for the day movies are released again and people go to the movies again. Whether that’s going to be weeks, months or a year I don’t know, we’re going to wait and see.”

Like many other theater owners, Michaan’s primary focus is on the safety and well-being of his staff and guests, and he says he will wait until both the industry and the government say it’s safe to reopen. He also says he’s fortunate to be able to continue making mortgage and other payments while the Grand Lake is closed.

“I used to own a lot of theaters, at one time I had 19 locations going at once in the Bay Area,” he says. “Had I had that kind of a company today, I would not have been able to weather this storm.”

While Michaan thinks that movies will come back, he is not so sure audiences will come flocking to the theaters.

“I think they will come back, but in my opinion people are not going to come flooding back to theaters, they are going to take a cautious wait-and-see attitude, but they’ll be back,” he says.

In the meantime, some movie theaters, including Rialto Cinemas, Lark Theater, Cameo Cinema in St. Helena and the Rafael Film Center in San Rafael, have taken to the internet to offer patrons online streaming rentals of both classic and contemporary films. Since the summer began, still other theaters have revived the Drive-In movie, with outdoor screenings popping up across the region at locations including the Alameda County Fairgrounds, the Bon Air Center in Marin County and the Cloverdale Citrus Fairgrounds in Northern Sonoma County.

Once movie theaters do reopen, there is a good chance things will look very different.

“We are meeting or exceeding the safety protocols that have been mandated,” says Neil Perlmutter, vice president of Santa Rosa Cinemas, which runs theaters in the North Bay as well as Central and Southern California. “There’s going to be social distance seating in the theaters, we’re going to ask that guests wear face coverings indoors, including the auditorium, except when eating or drinking. We’ll have the shields in place between staff and guests, we’ll have enhanced cleaning for all the common touch-points. We’ll probably have fewer show times to allow for more cleaning and to spread the show times out to help alleviate people being in the lobby at the same time.”

A month ago, Santa Rosa Cinemas was planning to reopen theaters in Sonoma County as early as July 1, though recent developments have pushed that timeline back to late July.

“Last week, New York came out and said they were going to hold off opening theaters until August at least because they wanted to get some data on transmission indoors,” Perlmutter says.

New York State’s decision is a major reason why Tenet and other high-profile releases like Disney’s live-action remake of Mulan were pushed back to August. Without new movies to screen, Perlmutter says opening in July was not economically viable.

“We can’t play just old movies for a month,” he says.

Still, Perlmutter will be screening some old movies this month as part of his ongoing CULT Film Series at the Roxy Stadium 14 in Santa Rosa. The classic underground film program will present three double-feature screenings every other week, starting with a screening of Jaws and Jaws 3-D (presented in RealD 3D) on Thursday, July 2 at 7pm. The series also screens a Richard Pryor double feature on Thursday, July 16, with Stir Crazy and Brewster’s Millions playing on the big screen. Finally, CULT will screen a pair of underrated horror gems, Tourist Trap and Puppet Master, on Thursday, July 30.

“It seems like there’s a lot of folks who are interested in coming back; we get comments all the time on our site from people who are legitimately mad at us for being closed,” Perlmutter says. “I think there’s a fundamental need for people to get out of their house.”