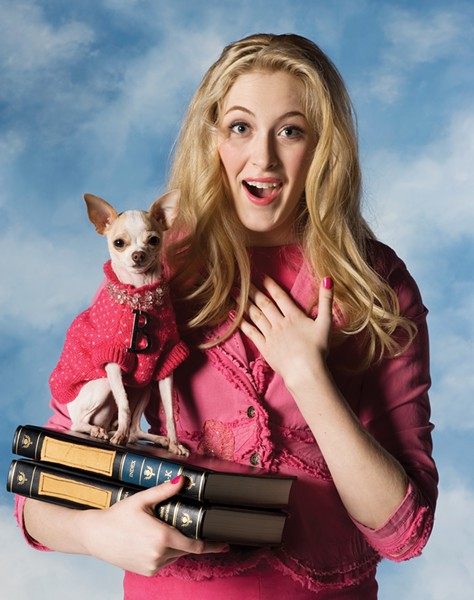 Contrary to what parents and pundits would hope, college is not just a place to work hard and get good grades. It's also a great incubator of self-discovery, a brutal but transformative landscape of pitfalls and opportunities, where students learn not just what they are capable of, but what kind of people they want to be.

Therefore, there are few shows more suited to a college-level performing arts program (in this case, the Santa Rosa Junior College's theater arts department) than the 2007 Broadway hit Legally Blonde: The Musical. Based on the 2001 movie, Legally Blonde was crafted for the stage by Laurence O'Keefe (Batboy: The Musical), Nell Benjamin and Heather Hatch.

Wrapping up a strong season for SRJC, director Leslie McCauley helms a spirited student cast and crew who make up in enthusiasm and charm (and an undeniable identification with the themes of the play) what they might lack in polish, vocal precision and stage experience. The result is a show that carries a whopping load of emotional weight, while remaining as sweet and fluffy as pink popcorn.

Fashion major Elle Woods (Sigrid Forsythe) is about to graduate from UCLA when she learns that her boyfriend, Warner (Blake Chandler), is not planning to propose (as she and her Delta Nu sorority sisters anticipate in the bouncy, show-opening number "Omigod You Guys"). Having decided she's not "serious enough," Warner dumps her, heading out for both Harvard Law School and a new girlfriend, the dour, über-serious Vivienne (Kayla Kearney). Determined to reclaim Warner's love, Elle charms the Harvard admissions board into accepting her unorthodox application, involving a marching band and a team of cheerleaders.

Once at Harvard, Elle suffers a harsh series of setbacks and challenges. Ostracized for her perky attitude, aggressively pink wardrobe and apparent lack of interest in the law, Elle's only supporters are Paulette (Audrey Tatum), the unlucky-in-love manicurist at a local beauty shop, and Emmett (Zachary Hasbany), the gangly assistant of the school's most notorious and judgmental law teacher, Professor Callahan (Christopher Gonzalez).

Working hard against a score that features unmemorable, hard-to-sing songs and a script that becomes increasingly unfocused as the story progresses, the cast of SRJC's Legally Blonde pulls it off anyway, conjuring a heartfelt breath-mint of a show. In the end, Elle learns a major life lesson: that being true to oneself, quirks and all, never goes out of style.