Blueprint for a Bard 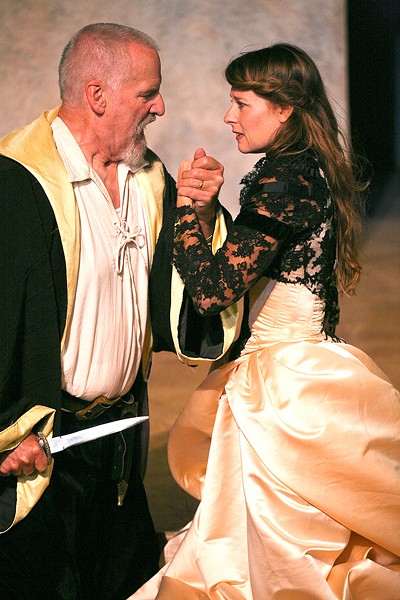 It's one of the most influential plays in the English language, yet no one ever produces it. It clearly inspired the styles of Marlowe, Jonson and Shakespeare. Still, few audiences have heard of it.

What do people have against Thomas Kyd's The Spanish Tragedy? Is it dense, archaic, stilted, boring? Not a bit. Known to the Elizabethans by its awesome subtitle, Hieronomo Is Mad Again, Kyd's action-packed blockbuster—all the rage of London when young Shakespeare first arrived in town—includes a vengeful ghost, two different Iago-like characters, a mad woman tossing flowers on the stage, a central character who might be a lunatic but who is probably just pretending, a plot-advancing play within a play and a last-minute bloodbath in which many, many people die in quick succession.

The Spanish Tragedy, presented through Aug. 11 by the Marin Shakespeare Company, is so over-the-top, so frequently moving and stirring, we not only see why Shakespeare wanted to steal as much as he could from it but we have to wonder why theaters stopped producing a play that is such an obvious, crowd-pleasing hoot.

Actor Julian Lopez-Morillas is stunning as Hieronomo, the fair-minded Spanish judge whose grief over the murder of his son turns to bloody vengeance when he teams up with the spirited Bellimperia (an excellent Elena Wright), the woman his dead son had planned to marry. Together, the gruesome twosome cook up a dramatic plot that's brutal to the point of absurdity—and, in this, almost postmodern.

The whole story is packed with action, comedy, twists and turns and touching moments of real beauty, not to mention all the hangings, shootings, stabbings, impalings and throat-cuttings, which Currier stages with wit, grace and a sharp attention to detail.

The cast is all over the map. Some, like Wright, Lopez-Morillas, and Scott Coopwood as Bellimperia's watchful yet oblivious father, the Duke of Castille, all give grounded performances. Others—primarily a rabid Dashiell Hillman as the villainous Lorenzo—are distracting, adopting the amped-up overacting and shameless mugging that has often marred Marin Shakespeare's productions in the past.

Still, Currier keeps it all from going off the rails, blending Kyd's thrills, shocks, laughter and pathos into one amazing must-see show.