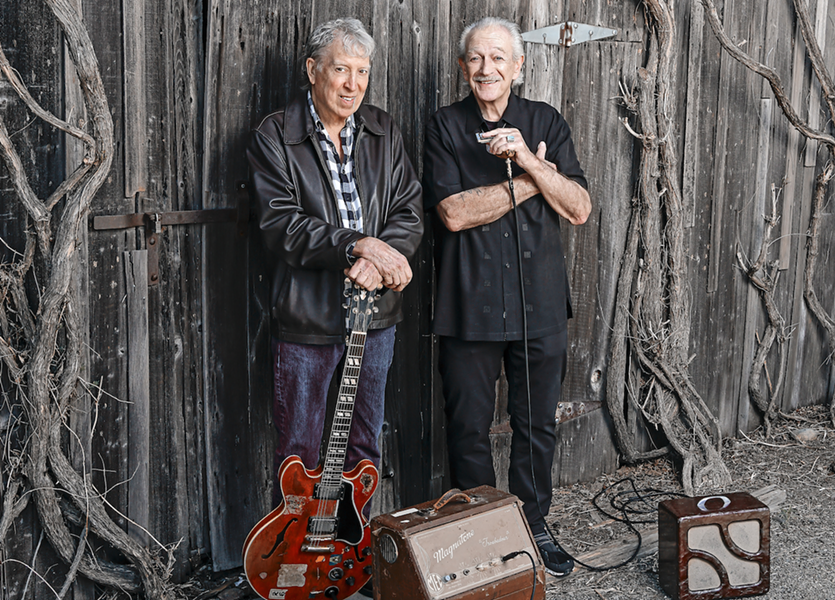 They both got their starts in Chicago in the ’60s. They both became widely acclaimed for their musicianship early in their careers, they both found success with their own bands and with other master musicians, and they both moved to the North Bay many years ago; Bishop living in West Marin and Musselwhite calling Sonoma County home part-time.

Since crossing paths and becoming friends, Bishop and Musselwhite have become musical compatriots, touring together since the 1980s in addition to touring with their own bands. They have also each continued to create critically acclaimed, award-winning music on vinyl. Though, they’ve never released a record together, until now.

On Friday, Sept. 25, Elvin Bishop and Charlie Musselwhite make their debut as a recorded duo with the release of their first collaborative LP, 100 Years Of Blues.

The down-home collection of music features Bishop and Musselwhite trading songs over the course of 12 spirited tracks that consist of nine originals and three reimagined blues classics.

“It all fell together so quickly and easily,” Bishop says in a statement. “We each brought about half the songs and recorded them all in one or two takes.”

The inspiration for the album came after Bishop and Musselwhite first joined forces in the studio to cut the original version of the song “100 Years Of Blues” for Elvin Bishop’s Big Fun Trio in 2017.

Last year, the two performed a series of widely acclaimed stripped-down shows in which they swapped stories and songs, accompanied by pianist and guitarist Bob Welsh.

After that tour, the three musicians came together in Greaseland Studios in San Jose, as well as in Bishop’s Hog Heaven Studios, to lay down their tracks. The result is a spontaneous and constantly surprising record of laid-back Blues jams and versatile, heartfelt performances. In addition, Bishop and Musselwhite each lyrically mix easy-going storytelling songs with potent protest anthems on their original tunes.

“This is us sitting down to play the music that we love and resonating together effortlessly because we’re coming from the same place on many levels,” Musselwhite says in a statement. “We see things pretty much the same. Musically it’s like falling off a log. It’s so easy and it just makes sense.”

'100 Years of Blues' is available digitally and on CD on Friday, Sept. 25, via Alligator Records. alligator.com.