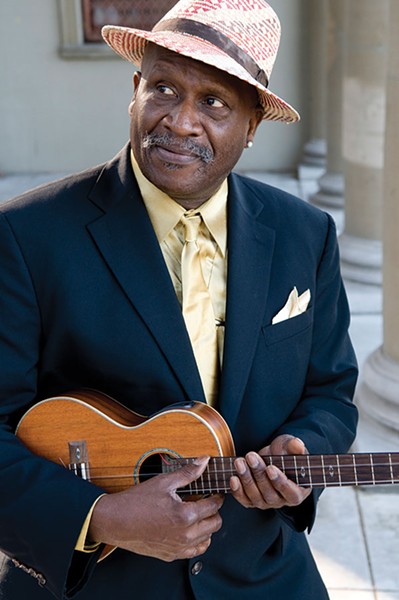 It's no surprise that music legend Taj Mahal says the blues is life.

"It's a living music to me, and it will always live because people will always have this kind of distortion in their life where they need something to help them," Mahal says. "Blues covers all facets of life, from the worst to the best."

Musically, Mahal reflects that sentiment by covering all facets of the blues. Anyone who's followed the guitarist for the last 50 years can attest to the way his innovative blend of Afro-Caribbean jazz, reggae and world music has pushed and redefined the boundaries of blues.

"Music has been a part of my culture for centuries, and I'm joining in on the version of it that happens here and making sure I stay connected to all the other relatives," he says.

From the beginning, Mahal made it his mission to play with as many different people as he could, and growing up around jazz in Harlem, he notes that music transcended race and culture. Born Henry Saint Clair Fredericks, he adopted the stage name Taj Mahal in 1959 after dreaming of Gandhi and learning of the social-tolerance movements in India.

Mahal's philosophy continues to win him acclaim today, and he's having one of his best years yet. In January, he won the Grammy for Best Contemporary Blues Album for his 2017 collaborative LP with Keb' Mo', called

TajMo. Mahal was also honored as the B.B. King Entertainer of the Year and Acoustic Artist of the Year at the 2018 Blues Music Awards in Nashville.

"The experience was great. He's a meticulous producer and an incredible guitar player, just amazing," says Mahal of Keb' Mo'. "I'm glad to work with him anytime."

Currently based in Berkeley, Mahal makes his way back to Johnson's Beach in Guerneville this weekend for another appearance at the Russian River Blues Festival, on June 10, in conjunction with the Johnson's Beach Feel Good Party on June 9.

"It's one the of big West Coast festivals that I like to get a call from," says Mahal. "I run into people I don't get to see, and it's a great audience, a great venue and grounds."

"We're coming to play and to see you dance," Mahal says. "The more dancing, the happier we are."