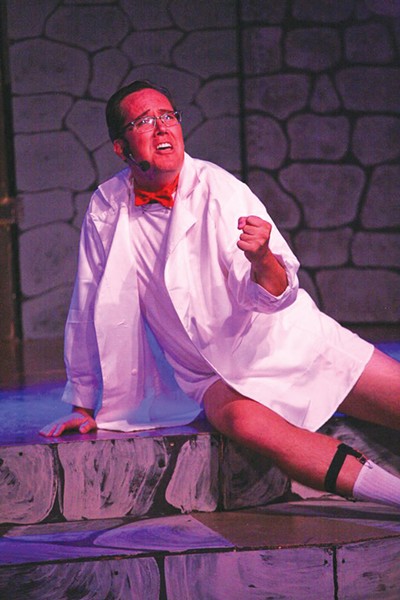 'Sometimes," muses actor Mark Bradbury, "you play a character you just don't like very much."

Over the last 12 years, he says, after appearing in more than 30 shows, Bradbury has portrayed his share of unlikable people. "With those guys," he notes, "you have to work extra hard to find something you connect with. Then there are the characters that are written without much depth or detail. They're thinly drawn, so you have to insert your own ideals, and your own meat, to make them feel real."

But then, Bradbury adds, there is Bob.

"I've never encountered a role like this," he says of the title character in Peter Sinn Nachtrieb's surreal comedy-drama Bob: A Life in Five Acts, opening this weekend at Main Stage West in Sebastopol. "Bob is the kind of character that makes me wish I was more like him. Bob inspires me to become a better person."

Beginning with Bob's birth in a restroom at a White Castle restaurant, the play follows the character from infancy to old age, as he crisscrosses America on his quest to become a great man. Along the way, he encounters an array of odd denizens, including his mother, a disgraced circus-animal trainer who abandoned him at the White Castle, but returns to steal his pants. Except for Bob, all characters are portrayed by a chorus of four—Laura Levin, Sam Coughlin, Gina Alvarado and Nick Sholley—all shape-shifting into tramps, travelers, truck stop waitresses, circus folk, socialites, girl scouts, even a pack of angry wolves.

Directed by Sheri Lee Miller, Bob is easily the most collaborative project Bradbury has ever done.

"I've really never had an experience quite like this," he says. "We've built this play together, as a team. Everyone in the cast gets to share their own ideas, then Sheri picks the best one. We give her a lot to choose from."

"It's also super-emotional," he says. "It's inspiring how unconventional this play is. It's the kind of thing that makes you want to run outside and break rules and try new things."

But will it make its audience want to become better people?

"It might," laughs Bradbury. "It's definitely had that effect on me. I'm not sure I'm a better person yet—but I think, maybe, I'm at least a better actor now."