Getting under the hood of Napa music fest 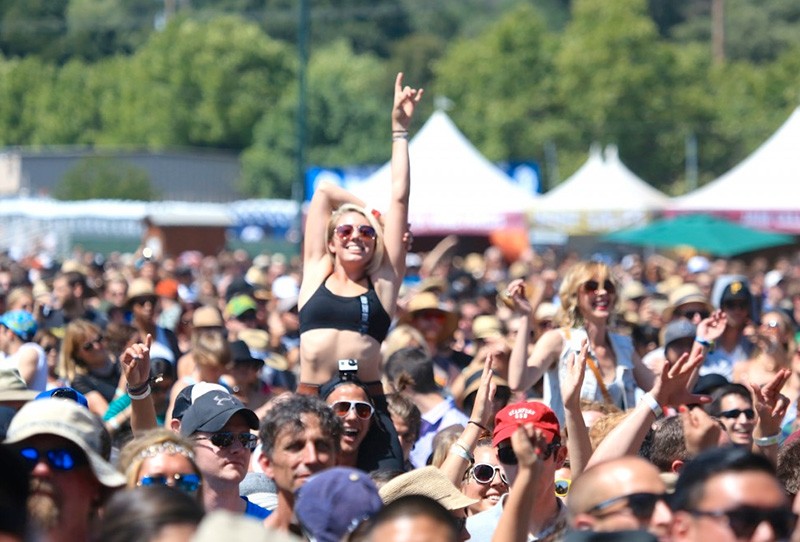 BottleRock uncorks next weekend in Napa. Robert Plant headlines a three-day event that has shaken off numerous vendor-related snafus that characterized the 2013 debut at the Napa Valley Expo.

Last year, the festival returned for a pretty smooth ride; this year, it's poised to hit its stride as a major North Bay success story. The success comes courtesy of the Napa-based Latitude 38 Entertainment, which took the helm last year to manage and coordinate the monstrosity of logistics at hand.

I asked Latitude 38 COO Justin Dragoo about some of the challenges he's faced, and about the rationale for some of the festival rules of the road. I also spoke with Capt. Jennifer Gonzalez, Napa's police officer on the BottleRock beat.

Last year's festival hit its biggest snag when the music was over, Dragoo acknowledges.

"One of the biggest areas of feedback last year was people leaving the festival," he says. "It was not efficient for people, and we have completely retooled it for this year."

The difficulty, he says, is in managing a festival that's going down in the midst of a busy small city, "so the more we can get a handle on cars, people and traffic, the better."

To keep the cars to a minimum, this year organizers contracted with private shuttle-bus company Busbank to bring people to the festival from around the state. The shuttles will run from Palo Alto, Oakland, Sonoma, Santa Rosa, San Francisco, Fairfield, Mill Valley, Sacramento and San Jose. Attendees can catch a ride for a single day or all three; prices range from a $30 round-trip from Sonoma, to $146 for three days back and forth to Oakland.

Dragoo says "thousands will be arriving at BottleRock" this way. Each bus will carry about 50 people. "At two people per car, that's 25 cars off the road for every bus that comes in," he says.

Locally, BottleRock has an arrangement with the city bus, the VINE, which will give free rides to ticket holders. "We're footing the bill, if you will," says Dragoo, to the extent that the bus fare is enfolded into the BottleRock ticket price. And Uber will also be a player this year, offering flat-rate rides to and from the festival.

The transportation improvements aren't just to keep the festival safe and the traffic moving freely, but to keep the DUIs at an absolute minimum. Numerous wineries will be selling their wares at the festival.

Designated drivers are OK, "but even better is a designated ride," says Dragoo. And once you've arrived, Dragoo says that this year "everything is walkable to the festival," including parking lots for those who choose to drive.

Gonzalez is new to Napa, having joined the city police force only last year. "From that perspective, it seems everyone is on the same page," she says. "Everybody came to the table friendly and ready to work, and ready to make this work. It's a big deal."

Dragoo and Gonzalez emphasize safety first, which starts with safely and efficiently managing the flow of some 30,000 people. Dragoo says he's been working with police and elected officials for months. There's a shared "acknowledgement that this is a very large event," he says, "and to make it easier and more logistically able to navigate."

Gonzalez says the California Highway Patrol will manage the traffic-and-people flow outside the event, the Napa police will help with the flow at the gate, and a private security firm will do the heavy lift when it comes to checking bags. "It's a collaborative effort," she says. "It has to be." Gonzalez stresses that people should utilize public transportation if they can, but if you drive to BottleRock, "pay attention to the traffic people on the road—don't hit the cops who are directing traffic."

Dragoo knows Napa is a challenging place to host a three-day music festival, given the countywide ban on short-term vacation rentals you'll find on sites like Airbnb—and the rates at local hotels. "It's a very real, very appropriate question, because the reality is that the hotels in Napa and Napa Valley proper are very expensive," he says.

But Dragoo also notes that a lot of out-of-towners might not know that less tony places such as American Canyon, Vallejo and Fairfield are pretty close by, "and hotels are there, and available."

He adds that there's an underutilized camping option at Skyline Park, with a shuttle service. "We could have done a better job advertising for them," says Dragoo, who adds that there are still "lots of sites available."

Those options, he adds, "could take some heat and weight from all the demand." Also, he notes, "the people in Napa are reevaluating the ordinance around Airbnb." Lifting the ban on the popular short-term rental portal could mean "a wealth of new places available" for future festivals.

Last year, the Bohemian heard from a few Napa readers who questioned the wisdom of hosting a three-day music festival in the hot sun during a historic drought.

Dragoo says the concern should be set aside, given that the only water being used at the site will be consumed by attendees. Festival rules allow attendees to bring in a single, empty liter bottle to fill with free water provided on-site. Attendees can also purchase inexpensive bottled water. Dragoo assures they won't charge $5 for water, and that the point of buying the bottled water is so you can refill it with the free stuff.

Dragoo pushes back against any suggestion that the existence of BottleRock is itself bad for the drought. Attendees will slake their thirst in a sun that is sure to be hot, but that's it, he says. And he notes that the banks of portable toilets won't be using potable water, unlike the home loos of many a festival attendee.

As for food, you're not allowed to bring any into the festival, not even a peanut butter and jelly sandwich.

"This is only our second year doing this," says Dragoo, "and we have been trying to make sure that local restaurants are incentivized to sell their goods."

He notes that banning outside food and bevies is "standard operating procedure for all other festivals—and we adopted it." But he stresses that the main driver behind the ban is that "we want to emphasize our support for Napa businesses."

The beer and wine will flow at BottleRock, but leave the cannabis at home: it's banned from the concert grounds, even if an individual has a prescription for it. Other prescribed medications are permitted, so why not marijuana?

Dragoo says the cannabis ban is again a reflection of festival best practices.

"The policy on that really comes from what is the standard at other festivals here and across the country," he says. "We don't have a strong point of view other than what's a known 'best practice.'"

Dragoo also notes that BottleRock is unlike many festivals in that ticket holders have in-and-out privileges, so you can go home or to your car and self-medicate between sets. Festival organizers will set up "amnesty bins" for banned booty as attendees flow through the entrance gates, says Capt. Gonzalez. So stash your vaporizer for a between-set puff well outside the gates.