by Nicolas Grizzle and Charlie Swanson 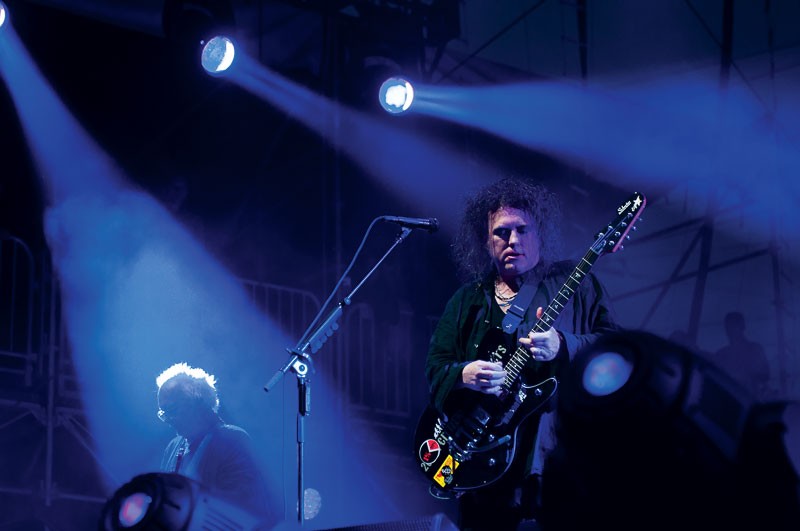 Two of the Bohemian's music critics attended BottleRock, the three-day Napa music fest that brought rappers Outkast, rockers the Cure and cowboy Eric Church to the city of 78,000 over the weekend. When they finally caught up with each other, they had plenty to talk about.

Charlie Swanson: So, the "blast from the past" festival was actually pretty fun.

Nicolas Grizzle: Yeah, so many '90s bands got back together. Smash Mouth sounded surprisingly good. I mean, they are the musical equivalent of Guy Fieri—pre-packaged mass appeal in a predictable format, but they sure know how to get a crowd going. And those catchy keyboard licks are just, they're like Cheetos—I know they hold no nutritional value, but damn if I don't want another one right away. They had the crowd in the palm of their hand, and kids half my age were singing along. I don't know if those kids were even born yet when these songs first came out. What was a standout for you?

Swanson: The Cure, closing out Friday night, was the highlight for me. The headliners flew in from England just for this show and played for two-and-a-half hours. They opened up fast and loud, which really got the crowd going. Robert Smith, the lead singer, was in rare form—he's still the male icon for tangled hair and messy lipstick. He danced along as the spider that caught the fly during "Lullaby" and sweetly wrapped himself in his own arms, so tight, never wanting to let go.

Swanson: When they finally did have to leave, the crowd helped them finish the lyrics to their encore of "Why Can't I Be You?" when the power was cut at 10pm and the band blew kisses and said goodnight.

Grizzle: Well, my favorite on Saturday was not the headliner, it was Weezer. The Blue Album is one of my all time favorites, but I'd never seen the band live. They opened with the Blue Album's first song, "My Name Is Jonas," and of course hit "Undone: The Sweater Song," "Buddy Holly," and "Say it Ain't So," which was so, so powerful live. They switched instruments for a while and let the drummer sing while the lead singer and guitarist Rivers Cuomo played drums with this I'm-concentrating-super-hard-right-now look on his face.

Swanson: Haha, like drums are really so hard to play.

Grizzle: Well, maybe not for Weezer's songs. Anyway, they surprised me with "Surf Wax America," the song about commuting to work on a surfboard. It's a great summer song.

Swanson: Talk about throwbacks—if you like being told to put your hands up, you would have loved the Gin Blossoms. Apparently they weren't satisfied with their own drummer, because the band asked the crowd to clap along about 78 times in their first three songs. After opening with their '90s hit "Follow You Down," the group played an enjoyable enough set, sprinkled with anecdotes about losing a Grammy to the Beatles and other big-shot stories.

Grizzle: Did you see anything cool from some of the younger bands?

Swanson: Oh, totally. TV on the Radio came out and just got to business. They were musically tight and didn't have to ask the crowd to put their hands up every 10 seconds. And Delta Rae, from North Carolina, played a supremely Southern set of folk, rock and roots. The bulk of the band is the three Hölljes siblings, blonde Nordic figures with powerful siren voices. The crowd loved their rendition of Bruce Springsteen and Patti Smith's "Because the Night." Their fiery passion resonated with the growing crowds on Friday afternoon.

Grizzle: That's the same vibe I got from Matt & Kim on Saturday. It's just two of them, but they got the crowd to blow up balloons, and it felt like a happy party. That audience was a lot younger than the crowd for Heart, who played at the same time as Outkast at the end of the festival. Heart actually went longer and had the power cut during their Led Zeppelin medley.

Swanson: Did you see any crazy stuff happen?

Grizzle: We were in the front 10 percent of the massive crowd during Outkast's set. About an hour into the set, somebody literally pooped in the crowd. We smelled it right before someone started yelling "They're pooping!" and we took that as our cue to leave.

Swanson: Whoa, seriously? How the hell does that even happen?

Swanson: That's pretty gross. I left early, at like 9pm, but it still took almost an hour to get a shuttle back to the parking lot.

Grizzle: It took me over three hours to get from the festival to my car when all the music was over. The line for the shuttles back to Napa Pipe four miles away was total chaos, but I heard that was fixed by the next day. If the lineup is this good next year, I'd probably go again.

Swanson: Hey, if they get Crash Test Dummies to perform, I'm there.