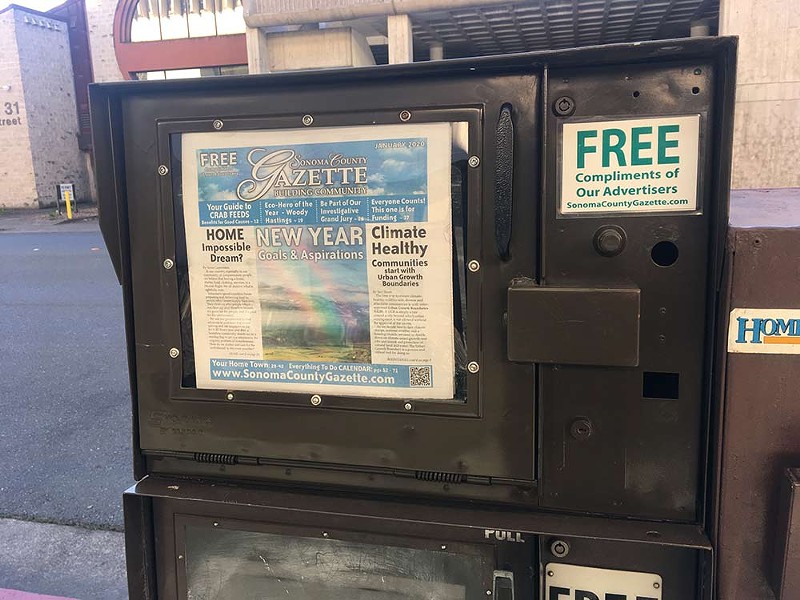 Last week, the North Bay's largest print media company announced it had purchased the Sonoma County Gazette, a monthly news magazine which grew in circulation drastically over the past 20 years thanks to its owner's community connections and hard work.

With the purchase of the Gazette, the company will hold a near-monopoly on print media in Sonoma County.

The Gazette is very different from any of SMI's current products and, in large part, a reflection of the business instincts and personality of Vesta Copestakes, the paper's longtime owner, publisher, editor and designer.

"I've always felt that the Gazette is organic; a biological entity that has a life of its own ... it doesn't fit into a standard journalism format," Copestakes wrote in a letter announcing the sale. "People tell me all the time that they feel it's 'our' paper. Readers are the people who write the articles and columns. When I want to educate people on a topic, I find experts in their field willing to write what they know. It's rare when a 'real journalist' writes for us."

Disclosure: I worked part-time as a "real journalist" at the Gazette for about a year ending this August.

In an interview with the North Bay Bohemian, Copestakes said that, despite some concerns from readers and contributors that she sold the paper to the local media conglomerate, she believes SMI has the best of intentions. She says the Gazette interested SMI because of its strong connection to the community, something that the company's other properties, which are mostly subscription-based, do not have.

Copestakes, who has been self-employed for the majority of her life, took over the Forestville Chamber of Commerce's monthly newsletter in 2001. With Copestakes at the helm, the newsletter soon had a new voice. Copestakes says she first got attention by allowing readers to contribute articles to the newsletter in the wake of the Sept. 11, 2001 terrorist attacks.

In 2003, Copestakes purchased the newsletter from the chamber of commerce. Since then, she has expanded the publication's reach throughout the county and rebranded it as the Sonoma County Gazette.

Currently, Copestakes and her team distribute 35,000 copies of the 72-page paper to approximately 1,000 locations throughout the county each month. Because the paper features a wide range of articles by locals who are often unrepresented in other publications, it has a sizable following of fond readers.

Since purchasing the paper, Copestakes, who regularly logs 80-plus-hour work weeks, filled the roles of publisher, editor, designer, ad sales director and distribution manager. She led a team of 20-odd part-time contractors who helped with billing, design and distribution; in addition to numerous contributors around the county.

Copestakes says that on her 70th birthday, after several years of considering her options, she decided to sign an agreement with a brokerage firm to sell the paper. The sale, which will allow her to retire, was a birthday present to herself.

Copestakes says there were six interested parties, all told—including Gannett, one of the largest newspaper chains in the country. Ultimately, SMI was the only bidder with the proper combination of local connections and adequate financial and institutional backing, she says.

In a Press Democrat article about the purchase, representatives of SMI implied that they intend to keep Gazette's content largely the same while expanding the paper's online presence.

"We will continue the fine tradition of local community content that Vesta [Copestakes] has nurtured for many years," Darius Anderson, SMI's lead investor, told the Press Democrat.

Copestakes, who will retain editorial control of the paper for the rest of the year, is very hopeful that the new owners will continue the paper in its current format.

"The whole thing feels really good," she says. "And it's a whole lot better than just letting the Gazette end after I retire."

However, Teri Shore, North Bay regional director of the Greenbelt Alliance, a nonprofit that fights urban sprawl, is skeptical about whether the new owners will give as much space to certain political causes.

This month, Shore has a front-cover article in the Gazette about the future of the City of Sonoma's Urban Growth Boundary, the invisible line around the city which restricts development. Shore says she will be "very surprised" if the paper continues to publish as many articles from environmental groups once SMI fully takes over.

"I hope it goes well, but I don't have a lot of faith," Shore said of the purchase.

Shore suspects the paper will become more partial to business interests, developers and other parties that often populate the pages of SMI publications.

Sonoma County and the North Bay have avoided the worst of the local-newspaper massacre that has swept the country in recent years.

Recent research from the University of North Carolina confirms what most everyone already suspected: across the country, local newspapers are closing at a rapid rate. A few massive chains own many of the survivors.

Since 2004, the number of journalists employed in the country has dropped by 45 percent and "between 1,300 and 1,400 communities that had newspapers of their own in 2004 now have no news coverage at all," according to the UNC report.

That lack of local media will have long-lasting impacts on local politics across the country, the report states. And, with the start of a new decade, most industry analysts agree the situation is unlikely to get better anytime soon.

But, while there is good reason to be grateful to have a local newspaper at all, local ownership poses its own problems, particularly when media owners are deeply involved in politics.

When SMI took over the Press Democrat in late 2012, Anderson "repeatedly promised to steer clear of the newsroom, despite concern that his partnership of local 'power brokers' may try to turn Press Democrat journalists into their own PR machine," according to an online report by the Pacific Media Workers Guild, the union which represents the Press Democrat's journalists.

But, as the Bohemian reported last year, there is reason for concern about what does and doesn't make it into SMI publications.

The Society of Professional Journalists recommendation for such situations is simple: "Avoid conflicts of interest, real or perceived. Disclose unavoidable conflicts."