Dispatch from The Life You Should Have Had: Become an architect, join Apple as an evangelist, transfer to their 3D printing team, quit, do the startup thing, retire to make art full-time and raise your elementary school-aged daughter someplace where she can go outside without risking a drive-by. Be happy.

Looks like you should have had the life of David Alan Boyd. But sorry, you're too late; Boyd isn't giving up the slot.

Tired of the tech world and able to do something about it, Boyd and his wife moved their family to Petaluma in 2005. Once there, Boyd created a studio behind his modest ranch-style home and dug in. Interested in many genres, not just those of the camera, Boyd's photograph Crucible adorns the cover of the 2013 ARTrails catalogue, an event in which he is again proud to participate. Running Oct. 12-13 and 19-20, ARTrails open studios is a free self-guided tour of some 160 Sonoma County artists and their studios, all of whom are judged into the program to ensure the overall quality of the work.

"I'm a photographer at ARTrails," Boyd says, "but I don't consider myself . . . " he trails off. "I'm an artist. It depends on what the situation calls for. It could be architecture—sometimes I do small buildings—to photography, to drawings, to pieces that incorporate all of those."

While Boyd often constructs housings for his photos, boxes and cabinets that contain a surprise, he says that his main occupations are "image and form."

He continues. "Photography is an art that's been going through a profound transition. Photographic images have become so ubiquitous that people don't even notice them any more. One of the things that I primarily want to do with my art is to get people to wake up and pay attention, open up their minds to something in particular, so I've tended to take my photography in two directions: One, toward abstraction; the other, towards the juxtaposition of form and the photographic image." 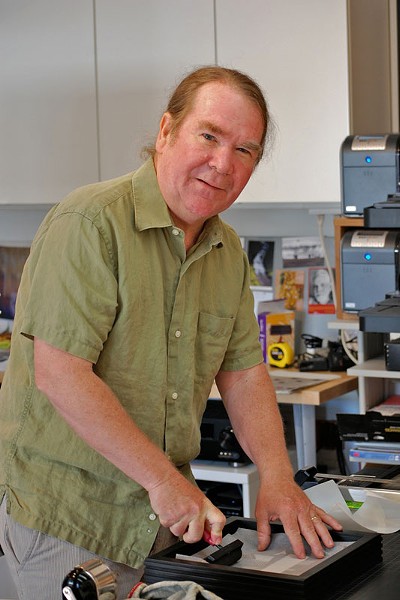 What Boyd doesn't mention here is water. Water is the reason he's extensively photographed Death Valley, which was once an ancient sea. It's why he's documented the Lagunitas Creek watershed in western Marin County. It's also the compulsion behind his shots of snow, ice spines, snow shadows and frigid winter surf. Because with water, there are patterns.

And with breath there are patterns. A longtime meditator, Boyd spent one three-month period documenting, as best one can, his morning practice. To do that, he drew an exhalation each morning. No—actually drew it.

"I was really interested in how to bring form or image to that experience of the breath," he says, pointing to a sheet of paper. "This is a gestural drawing of an out-breath." Once completed, the series of drawings were incorporated into a cabinet Boyd constructed, which he likens to a rib cage.

The body's ebb and flow, its construction, the fluidity of creation and destruction: it's all there in the life you can't have because David Alan Boyd already snagged it. Nice that he's willing to share.