Brew by the Bay

Tiburon's Tap Beer Fest began as an idea over coffee 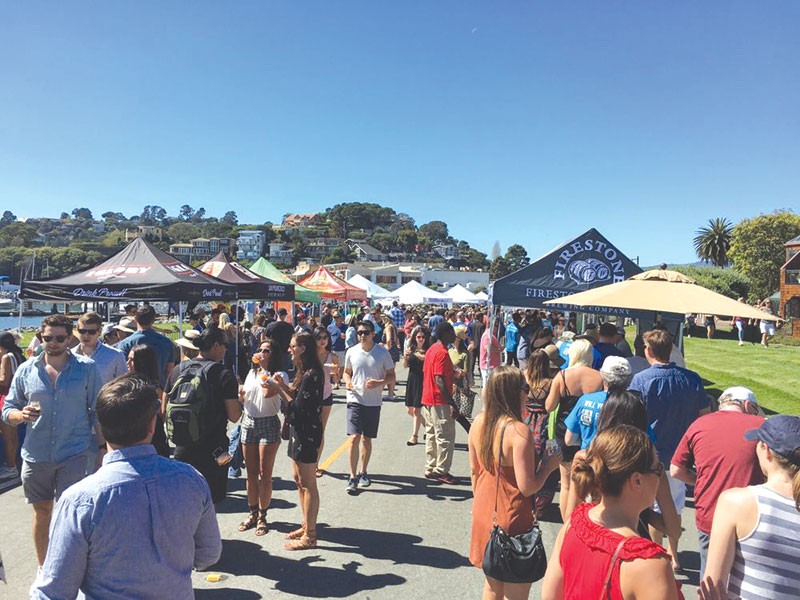 The Tiburon Taps Beer Festival on Sept. 23 has a feature that many others might envy: breathtaking vistas of San Francisco, the Golden Gate Bridge and the bay. Just like craft beer, the views never get old.

Thrown every fall by the Ranch, through the Tiburon-Belvedere Joint Recreation Committee, the festival is a one-day extravaganza that welcomes numerous breweries, cideries and even coffee roasters from the Bay Area and beyond. And this year, "beyond" really means beyond, with representation from Scotland, courtesy of Auchentoshan, a single malt whisky brand.

"The festival began when I ran into my old friend and co-worker Cathleen Andreucci, the director of the Ranch, at a Starbucks," says Jessica Hotchkiss, the youth recreation supervisor of the Ranch and the festival's chair.

The Ranch offers fitness, language, technology and art classes for adults, sports activities and classes for youth and a variety of specialty summer camps.

"[Andreucci] said she wanted to throw a beer festival, and would I be interested in doing that. I said yes, and the rest is history!"

Going into its fourth year, Tiburon Taps brings together more than 30 vendors, including Magnolia Brewing Company in San Francisco, Lost Coast Brewery in Eureka and Adobe Creek Brewing in Novato. All will be offering samples alongside complimentary food stalls and entertainment.

For a venture that started as a conversation at a Starbucks, the festival has definitely outgrown its humble beginning. Last year, the festival sold out, with more than 1,300 attendees. Hotchkiss is responsible for "begging every brewery in Northern California to attend our event," and with the abundance of beer events in the area to keep makers busy, the mission isn't as easy as it may seem. "It takes me around six months to fill our brewery and beverage roster," she says.

This year, her efforts brought on some interesting participants. "We are very excited to introduce new local Marin County brewers, Indian Valley Brewing, Rugged Coast Brewing and Adobe Creek Brewing," Hotchkiss says. "Another big addition is Ballast Point Brewing & Spirits, out of San Diego. I truly appreciate all of the brewers that attend our event, as they are donating their time and beverages."

The vendors are not the only ones donating—the festival is largely run by volunteers, and ticket sales help raise funds for scholaships at the Ranch.

The festivities, all part of the $45 ticket price ($20 for designated drivers), include music from cover band Neon Velvet, food, lawn games and the Best Brew contest. Front and center are the stunning views.

"I'd have to say our location is the best in the bay," Hotchkiss says."