Contemplations on mortality by way of Willowside Meats 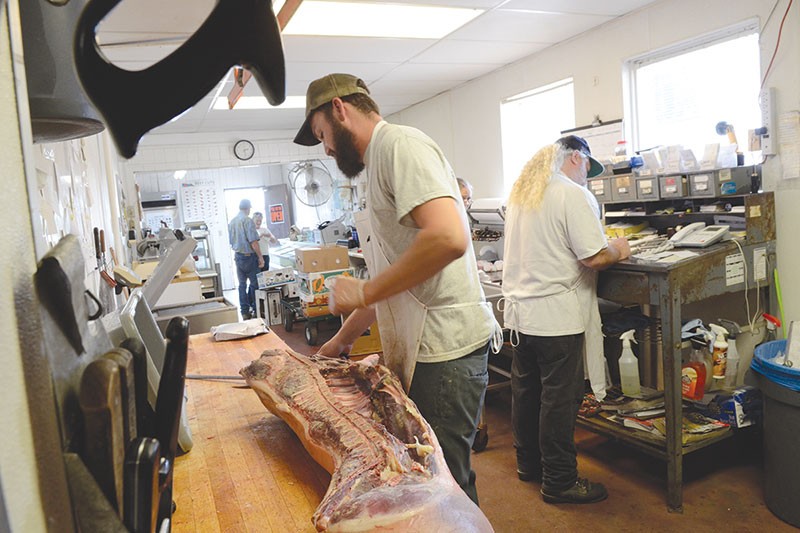 I was preparing the steak, the broiler was heating up and I lavished the dry-aged New York sirloin with a wet smear of grated garlic. I then turned to the sack of crimini mushrooms I'd grabbed at the co-op and fell into a spiritualized meat-reverie. A moral moment had revealed itself. A beefy ethical question was raised.

The dogs had assumed their usual position on the big chair, and shook with bug-eyed anticipation at what they knew was coming. My little duo of chop-licking freaks of the Mexican hairless-dog persuasion watched with growing eagerness as I hovered over the steak and offered the usual flow of pre-dinner patter to them, "Ohhhh, it's going to be good!" We've been through this before.

Of course you'll get some steak, little ones, yes, yes, of course you will, even at $18 a pound from Willowside Meats, the legendary butcher shop out past the Santa Rosa city limits on Guerneville Road. I had earlier made the pilgrimage to the shop's dusty parking lot and beheld, with some certain glee, its humble, shack-like repose in the afternoon sun. Big fans were whirring inside as the dust settled in the lot and I made my way inside . . .

I rinsed the mushrooms and started to crumble them around the steak and, as I was doing so, recalled a story I once read about the breed of my dogs, known officially as the Xoloitzcuintli, the national dog of Mexico and roughly pronounced as "cholo-its-squintly."

As I understand the story, these animals, an ancient, primitive breed, were held in high spiritual regard by the Aztecs, and especially among Aztec royalty, who believed that upon one's death, your Xolos would be the spirit guide to the next place, over the well-marbled meat bridge, as it were. So when some Aztec big-wig died, his Xolos were killed and placed next to him in the burial crypt.

I shuddered at the thought and remembered I needed to make a vet's appointment for my guys and tried to forget the part of the story where Xolos were also eaten in large numbers—as I arranged the mushrooms around the steak and then folded the meat packet into its aluminum-foil pouch and shoved it into the broiler, where it would remain for all eternity, or 20 minutes—whichever came first.

Then I broke out the head of purple-red cabbage and ran it through the grater until I had a nice pile. That was for the dogs. Dog-loving readers out there might think they take the cake when it comes to spoiling their animals, and who am I to argue, but can anyone say that they prepare shredded cabbage mixed with chopped-up bits of $18-a-pound steak for their beasties? Does anyone make sure their dogs enjoy an appetizer slice of fresh pear smeared with a chunk of ferociously stinky bleu cheese? Am I alone in the regular Sunday ritual of boiling up a couple of Mary's chicken legs and dropping them into the bowls for a supervised frenzy of dog-joy chomping at the chicken?

Well fine. I am ridiculous, foolish, over-indulgent with my little guys, who I think are grateful for the attention, but you never really know. I do know that they also love their vegetables, and especially cabbage, as do I—just not as much as we all love meat.

I stood over that steak and faced facts. We're all just a bunch of meat in the end, a slab in a casket or a pile of dusty corn-meal scattered to the wind. I stood there and thought of how I really do believe that people who refrain from eating meat operate on a higher ethical plane than the rest of us loathsome, bloodthirsty carnivores. Always have. Yet getting there is the hard part, the temptations of the flesh are all-abounding, and when you step into Willowside Meats, all bets are off. All is lost. Bring the meat coma, fire up the red-meat rationales, and tell yourself that if the tables were turned—well, that chicken would eat your liver like nobody's business.

I hate the expression "old school" almost as much as I hate the tailgater in that jumbo black SUV who almost rear-ended me on the Guerneville Road when I slowed down to turn into the Willowside lot. And that's saying something. But if the marinated beef-flaps fit, I guess you've got to wear them, and "old school" is kind of apt when it comes to describing this place. Willowside smells like meat, it oozes meat particles through every offal pore of its being, it offers numerous meat-map diagrams on the walls, and there's a fleshy meat man out back with a white shock of hair and beard, who is wearing a Motörhead T-shirt beneath his bloodied apron. Born to lose, live to broil.

And behold the meat, for it is legion: There's a freezer-full of house-made sausage of every persuasion to check out, from your brats to your Italian spiced deals, and for certain there is grass-fed beef galore and the sign out front says as much. Another freezer houses all sorts of chopped meat and various animal parts, and the guy ahead of me in line just ordered over $300 of product and seems to be enjoying every last minute of the transaction as he chews on some jerky.

I just want a pound of the dry-aged New York sirloin. Nothing too fancy or extravagant. The meat-clerk takes the big beef slab out of the glass case and carves off the requisite portion, wraps it in butcher paper and I'm off.

Later I stood over the steak as it rested in the broiling pan, a firm and sturdy chunk of beef, and felt that teenie pang of guilt for the cow that had been slaughtered so that I might indulge the beast within.

I imagined myself as the steak itself, a slab of dead flesh faced with an uncertain and perhaps broiling-hot afterlife. As I surrounded the steak with them, I came to see those mushrooms, those lusciously earthy crushed criminis, playing the role of spirit guide to the aftertaste.

I lowered the steak into the broiler, that holy sarcophagus of arteriosclerosis, and said some little bullshit prayer for the cow, who probably had it coming anyway. Then I popped a couple of fish-oil pills and poured another glass of sake, then sat with the dogs on the big chair where we slobbered together as one.