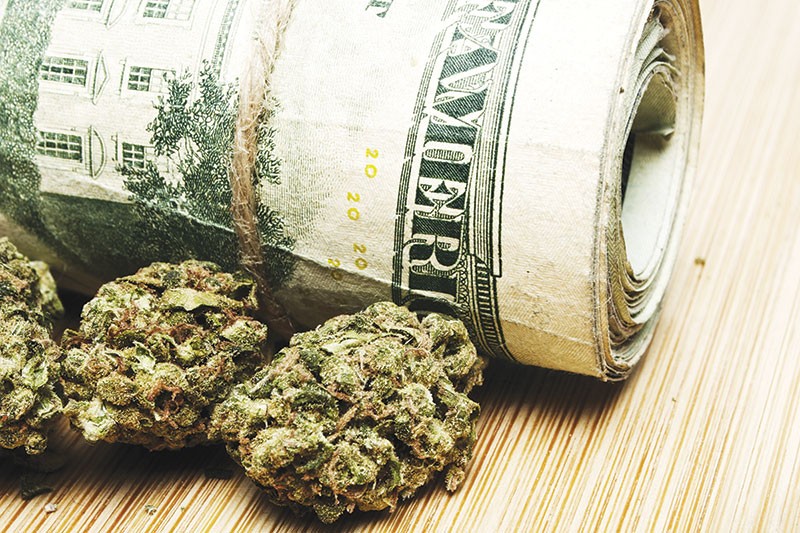 Gov. Jerry Brown released his $180 billion fiscal 2017 budget last week and identified a $1.6 billion deficit, the result, he said, of slower than anticipated growth in the California economy.

The deficit's return—the first since 2012—comes in the aftermath of the state's historic yes vote on Proposition 64, which legalizes adult use of recreational cannabis in the state.

State agencies that have studied the initiative, including the Board of Equalization, have reported that future excise taxes could funnel between $1 billion and $1.4 billion annually into the state coffers. But before you say "tax bonanza," it's important to underscore that the pot tax can't be used to close a budget gap in this or any year, unless the Legislature revisits the issue.

"The state government would certainly like to do that," says Hezekiah Allen of the California Growers Association, a cannabis industry group. But they are hampered by the legally binding language in Proposition 64, which says that no taxes collected on cannabis sales can be directed into the state's general fund. Moving forward, "the real limiting factor here is going to be, how much wiggle room does the Legislature have?" Allen says.

Even if Brown could close the deficit with pot revenue, the state won't have its new cannabis tax regime in place until next January, when licensed growers will pay a cultivation tax of $9.25 per ounce of buds and $2.75 per ounce of leaves. Another 15 percent sales tax will be applied to the retail price of all cannabis products, and localities, including Sonoma County, are cooking up local taxes of their own. There's a special pot tax vote in Sonoma County in March.

One problem for localities with enforcement issues of their own to fund, says Allen, is that Proposition 64 set a higher rate of tax than was even contemplated by the Legislature, which will make it difficult for localities to add an additional levy. "There is no room for additional taxes," Allen says.

Those taxes are mainly earmarked for law enforcement and anti-drug efforts in schools. According to a statement from Brown, state pot taxes can be used for "regulatory costs, youth substance-use programs, environmental clean-up resulting from illegal cannabis growing, programs to reduce driving under the influence of cannabis and other drugs and to reduce negative impacts on public health or safety resulting from the legalization of recreational cannabis."

"Right now, there's going to be a lot of pain before there is any gain," says attorney Aaron Herzberg, a partner at CalCann, a California medical cannabis real estate investment firm. But Allen says the $53 million proposal "is an open question." He notes that policymakers and the industry "are thinking that we should maybe move a little slower and take an incremental, balanced approach."

The state envisions a single regulatory framework for recreational and medical cannabis. Nate Bradley of the California Cannabis Industry Association says his organization was in a conference call with the governor's office last week and that "they are pushing ahead with one system." He says stakeholders such as the CGA don't want to see a single regulatory structure enacted because "there's lots of money" at stake in, for example, medical-cannabis distribution networks.

Brown's office has reported that the $1.6 billion budget shortfall this year will be closed via a slowdown on planned outlays for K-12 education and on the elimination of some discretionary spending.

The governor has opposed legalized weed in California on the grounds that everyone would be getting high instead of working. Donald Trump basically makes the same argument. Meanwhile, as Herzberg observes, most of the cannabis sold in the state is on the black market, and for every additional tax the state adds, the more likely it is that those growers will stay in the shadows and not participate in the licensing process. The more tax-heavy the recreational industry becomes, he says, the more likely it is that recreational users will get a medical card to beat the local or state sales tax. There's a lot of work to be done, and Herzberg is convinced that $53 million won't cut it.

Meanwhile, Brown alludes to the uncertain federal-level issues: "The amount and timing of revenues generated from the new excise taxes are highly uncertain and will depend on various factors including state and local regulations, how cannabis prices and consumption change in a legal environment, and future federal policies and actions toward the cannabis industry."

Allen believes the two-decade-old medical cannabis industry in California is probably safe from any attacks from anti-pot attorney general nominee Jeff Sessions, but notes that "there are a lot more questions about adult use moving forward. The governor's proposal stuck with what we were expecting—combining the two systems and moving forward with one regulated marketplace."

Herzberg says a pot crackdown in California is hard to imagine given the public support for legalization and that Trump adviser and PayPal founder Peter Thiel is "heavily invested in cannabis."