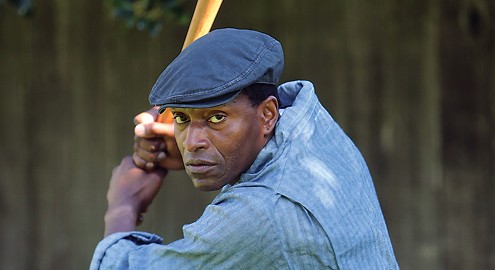 It's a basic truth about theater: the best plays are those that are both specific and universal, revealing vivid details about individuals or cultures or historical moments, while giving a glimpse of the common thread that connects us to the characters whose lives are unfolding onstage.

The late August Wilson was among the best practitioners of this art. His "Century Cycle," 10 plays spanning a hundred years, one for each decade, is rooted in the larger African-American experience. The plays are filled with fury and frustration, humor and hope, and recount the heartbreak and resilient spirit of a segment of American society. At the same time, the plays are about fathers and daughters, sisters and brothers, husbands and wives, friends and foes. They explore getting ahead in the world, finding something to believe in, making and losing money, finding and losing love, discovering and losing a sense of one's value and purpose.

As such, August Wilson's plays are about everyone.

His Pulitzer-winning Fences, set in the 1950s, captures that sense of universality in a vibrant, emotionally driven production at the Marin Theatre Company. Directed with graceful attention to the connective tissue that binds a family together, Fences tells the story of Troy Maxson. A proud, deeply angry former Negro Leagues baseball player, Troy is at odds with his teenage son, Cory (Eddie Ray Jackson), who's been offered a shot at a college football scholarship.

Troy is one of the great characters of the modern American stage: petty, mean-spirited and unapologetically unlikable one moment, then gentle, generous and loving the next. Played with combustible complexity by Carl Lumbly, Troy is an achingly believable character, whose strengths and flaws are all frustratingly raw and real.

As his wife, Rose, Margo Hall gives one of the great performances of the year. As aware of Troy's flaws as anyone, Rose also sees what's good and beautiful about him, perhaps even more so than he does. Her gradual evolution from help-mate to standalone powerhouse, a progression that unfolds right alongside Troy's staunch, bitter obstinacy, is absolutely amazing to watch.