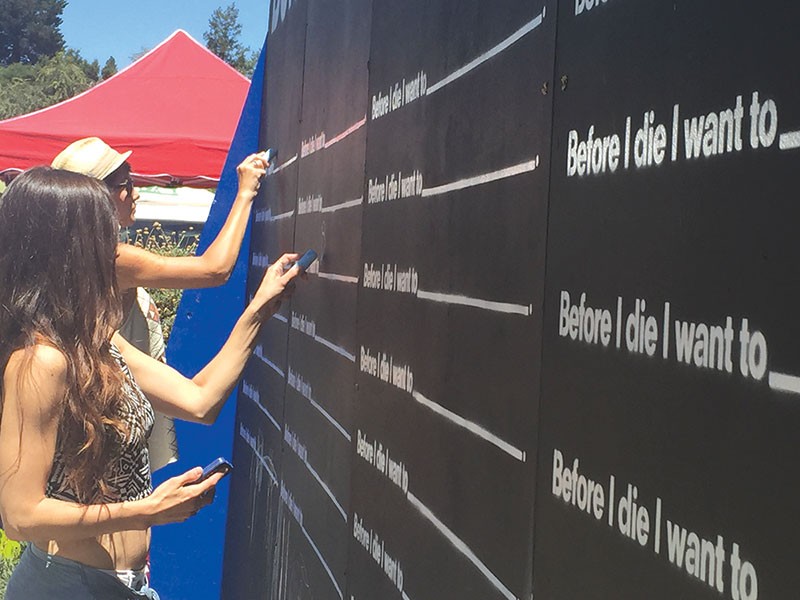 Most murals, when completed, are just that—completed. No more action is required for the artistic vision to become clear.

But for artist Candy Chang, completing her mural was just the beginning. Chang started a series of mural paintings called Before I Die, where she painted a wall with chalkboard paint and inscribed the prompt, "Before I die I want to . . ." and left chalk for passersby to leave their answers.

Chang started by getting permission to paint over a wall in her neighborhood in New Orleans, allowing her to be a part of the community, albeit indirectly. She then set up a website, beforeidie.cc, to display the wall with instructions on how communities can create their own.

Now there are more than a thousand walls around the world, in places such as Iraq, China, Denmark, Argentina and South Africa. Closer to home, Sebastopol is now on the map, with a wall erected at Toyworks toy store in the city's downtown.

"We hope the community will gain inspiration to follow their life goals before it's too late, and to help create a sense of security in us all when facing death" says Jessica Holcomb, local organizer behind the project.

Holcomb and a handful of friends launched a crowdfunding campaign in support of a local Before I Die wall and raised $500, surpassing their goal within two hours. With this money, Holcomb and her crew built an eight-foot-tall timber frame that supports plywood made into chalkboards. The words "Before I Die" were inscribed in large letters at the top of the wall, enticing anyone to come and write a response below in chalk.

Holcomb hopes that this will be a community outlet for those facing the deaths of loved ones, and a space for "triggering awareness of life, life goals and dream aspirations."

The wall had its public debut on June 19. At the bottom of the installation, an inscription reads, "In loving memory of Peter W. Menuez," Holcomb's close friend who passed away last year; his death inspired her to build the wall.

Toyworks owner Jon Goehring offered space for the piece to be erected. "The wall itself, I think, really reflects the outlook and purity of kids," he says. "Children see the world with unobstructed eyes."

Goehring sees the wall as a representation of the imagination and dreamlike quality that children possess, but it also allows adults to revisit their childhood dreams as well.

As family and friends gathered around the wall at its debut, people were able to get a perspective into the lives and aspirations of their peers in a new way. Inscriptions such as "Go to Europe," "Watch my daughter fall in love" and "Share the compassion that I have received" slowly accumulated on the chalkboard.

Construction of the wall allows it to be disassembled, and it may travel to other locations around town. Wherever it goes, the wall will remain a source of art, expression and inspiration.

Arts Before I Die Candy Chang