After some 13 years, Peter Phillips changes the guard at Project Censored 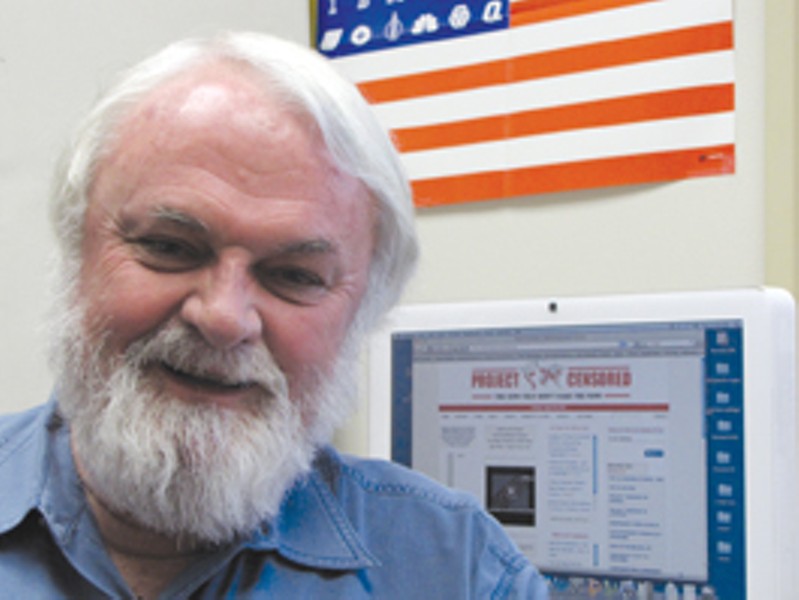 GOOD RUN: After 13 years, SSU prof Peter Phillips is stepping down from leading his student and faculty team in ferreting out underreported stories.

Unusual amid the conflict and turmoil that currently plagues Sonoma State University, Project Censored has undergone a smooth and peaceful transition. The highly esteemed media research group of faculty and students who ferret out and then spotlight news stories that lack yet deserve national coverage has quietly changed its directorship. Peter Phillips, on board the project for the past 15 years and at the helm for the past 13, has handed the title off to Ben Frymer, an SSU professor of liberal studies with a Ph.D. in sociology.

"I did 13 years and 13 books, so it's time to get someone else involved," Phillips says. "I really want to expand the Project Censored model to universities all over the world, because I believe that universities are where fact-checking occurs. There's a huge amount of information out on the internet, and people aren't sure what to trust. I want to get universities validating news stories and literally create a whole system that undermines the corporate media propaganda system."

Started as a grassroots effort at SSU in 1976 by Carl Jensen, Project Censored aims to train students in media research and pursue free press rights in the United States. Some 18 years later, Phillips, a sociology professor with a Ph.D. in political science and a 20-year career in nonprofit management, was hired at the school. Jensen approached him shortly afterward and offered him the directorship. "It was just that quick," Phillips recalls. "I thought about it for a few weeks, but it gave me a very interesting platform and the ability to talk about social issues in a broad way. It's a big plus of the job."

Phillips shadowed Jensen for two years before officially taking over in 1996. He continued teaching sociology of media and media censorship at the same time, and both classes work toward the production of the annual book, Censored: Media Democracy in Action, that features the top 25 nationally most underreported news stories.

Surrounded by hundreds of books on shelves and in boxes in his office in Stevenson Hall, Phillips sits at his computer and discusses the transformation wrought under his directorship during the past decade. "The biggest change is the internet expansion. When I started, noncorporate and independent media were mostly in print, but now it's all online," he says. "Our website is huge, with multiple news sources and continuous article postings." It also hosts a blog, the Daily Censored, which features daily news, as well as a validated process for universities to use in posting investigative reports.

The yearly book continues to sell 10,000 copies, but the real growth has been on the web; the list serves about 25,000 people. "There's more news here in one page than you see in the New York Times," Phillips says proudly. "It's a huge amount of stuff, all in one place." Now he's ready to pass on the directorship, while still working toward expanding professor participation and classroom involvement in investigative work at universities all over the world.

"I'm overworked and underpaid, but, yeah, it feels good passing it on," Phillips laughs. "I've really enjoyed doing the investigative work, training students in doing investigative work, and expanding Project Censored internationally by finding university professors that will adopt our program and validate the news."

Ben Frymer is currently working on founding the Center for the Study of Media in a Global Society at Sonoma State, which meshes with Project Censored's growth. "He shadowed me for a year, but what direction the book takes is his call," Phillips says. "Carl [Jensen] was good about not telling me what to do, and I will respect that with Ben as well. He'll bring in different people because he has a strong network of friends and researchers all over the country."

Phillips stresses the need for everyone, not just students and faculty, to get involved. "You can't have a democracy without an informed public, and the corporate media is irrelevant to democracy and working people in the United States," he pronounces. "I don't say that lightly; I really believe that."

He suggests finding independent news sources and turning off the TV news.

Clicking on the group's website, he demonstrates how someone can spend a mere half an hour and get global news from 20 trustworthy independent news sources. "You become an informed person and then inform other people. It's got to be grassroots, got to be from the bottom up. Independent news sources need support in a real way. Ultimately, city councils, boards of supervisors, states and governments need to support news through tax money to protect democracy."

Project Censored is not biased toward the left or right, Phillips emphasizes. "We are critical of the people in power, and we are critical of media not covering what the powerful are doing."

The release date for the 2010 book edition is Sept. 30. For more info, go to www.projectcensored.org. Peter Phillips intends to teach for another decade or more.