Story of fast-food mogul Ray Kroc is a McDud 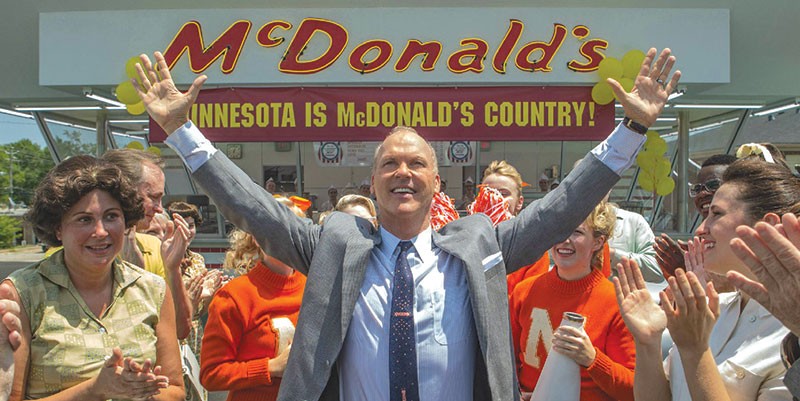 Director John Lee Hancock has gone from Davy Crockett (The Alamo) to a greasier kind of pioneer with The Founder, the off-again, off-again-again story of Ray Kroc, the burger baron who franchised McDonald's from the original owners, a pair of idealistic restaurateurs from San Bernardino.

Making the Golden Arches an interstate phenomenon, Kroc created the fast-food nation we live in today. Exuding gall and desperation, Michael Keaton plays Kroc with a Midwestern honk to his voice and a never-ending line of patter. Watching him get a series of doors slammed in his face and seeing him taking solace with a hip flask, it's like Beetlejuice died and went to hell.

Keaton's helmet-like forehead and barely repressed snarl suggest a deeper conception of Kroc's climb. We're supposed to grudgingly admire the nerve of the blinkered man, with his devotion to homilies, as when we see him alone in his motel room, listening to an LP of the "Press On" speech by Calvin Coolidge.

A squandered Laura Dern plays Kroc's first wife, left alone all night while her husband works his territory. Dern's effort only serves to reveal the thinness of the script.

The movie is a symphony of false notes, with very little atmosphere of the times. The Founder sells itself on Kroc's patter about how America needed his Golden Arches—a wishy-washy conception of this business giant that makes it look as if McDonald's corporate headquarters had approved every scene.

Given the tepid material, it's odd how choice the soundtrack is. Carter Burwell overlays solo piano for the small-town scenery. A Penguin Café Orchestra track plays over the "burger ballet," McDonald's employees in a mock restaurant floor plan, outlined in chalk on a tennis court. Despite the music, those who have a bit of PTSD about the time they spent at McDonald's may not be sold on the ingenuity and persistence of this credit-grabbing hustler.

'The Founder' is playing in wide release in the North Bay.