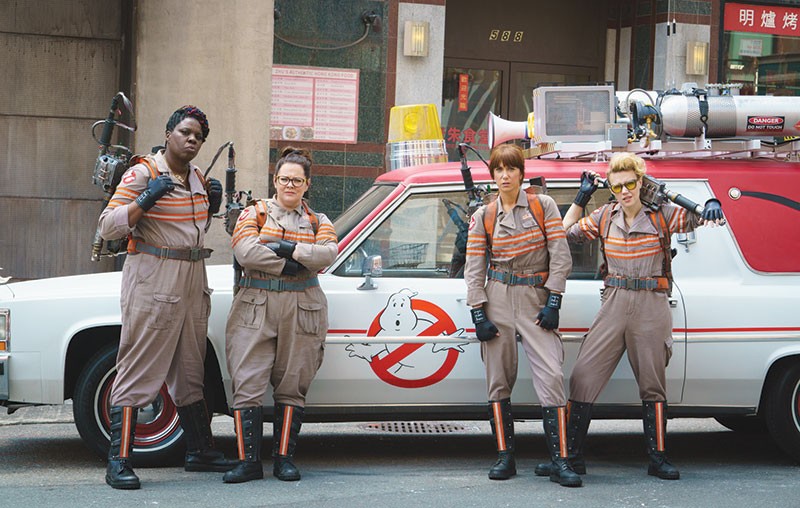 Wielding an electronic ghost detector that looks like a little rotating neon vulva, a triumphant Melissa McCarthy leads the female-power remake of Ghostbusters—a redo that has a chip on its shoulder over fans' sniveling venom.

Learning that the Ghostbusters reboot would be cast with women, thousands of male fans whimpered about PC Hollywood. (Posts about "raped childhood," a phrase swiped from a memorable episode of South Park, were splattered all over the net.) At the risk of validating the online fools, director Paul Feig includes scenes of the heroines having their ghost-hunting business dragged through the comments mire of popular websites, with libels like "Ain't no bitch gonna hunt no ghosts."

In this round, Kristen Wiig's Erin Gilbert is trying to get tenure as a physics professor. She fails when a book she co-wrote years before about the supernatural materializes on the internet. The book was uploaded and sold by her miffed former writing partner, Abby (McCarthy), now working at a lab in an off-brand tech school.

Abby's new partner is a super-scientist who calls herself Holtzmann, a pretty, arrogant blonde weirdette played by Kate McKinnon as the kind of brat who puts her feet on the mayor's desk. Joining the trio is the blustering subway worker Patti (SNL's lovable Leslie Jones) who saw a haunting at her station. The four team up to learn more about the afterlife while a bitter bellboy (Neil Casey) is trying to launch an apocalypse.

This new Ghostbusters is a patchy film that lacks the jittery, cocaine-laden quality of the writing, the dead spaces and the sudden maudlin episodes of the original. McCarthy, though, is a demonically talented slow-burn artist, and whenever the movie stalls, she slaps it back into action.

'Ghostbusters' is playing in wide release in the North Bay.