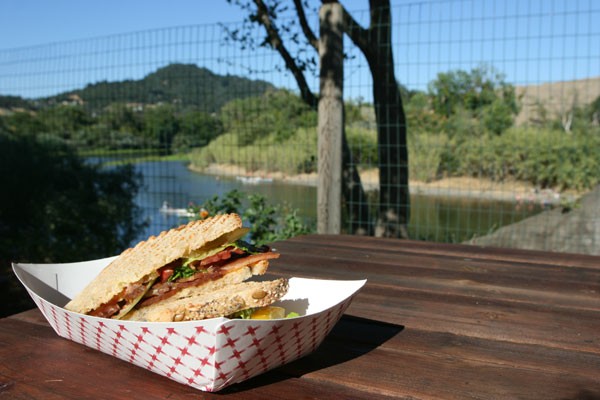 Is Healdsburg the most dynamic restaurant town in Sonoma County? Based on recent events, it sure gets my vote.

The big news this month came when the owners of Cyrus announced they're closing the two-Michelin-star restaurant in October after a long-running dispute with their landlord, the Hotel Les Mars. No word yet where owners Nick Peyton and chef Douglas Keane will land, but Crossroads Winery LP, an affiliate of the hotel, will take over the restaurant space and thereby join ownership of the restaurant and hotel.

Bovolo recently closed its cafe in Copperfield's books and morphed into Zazu on the River on the grounds of the Davis Family Winery at 52 Front Street. It's a snack shack, basically, but the snacks are definitely above average (pulled-pork sandwiches, BLTs, maple bacon popcorn and sautéed peppers from the nearby garden). The views of the Russian River, bocce ball and outdoor seating are pretty nice, too.

Now that Mateo's Cocina Latina is up and running, chef-owner Mateo Granados has fired up his popular Tendejon de la Calle restaurant-on-wheels again. Instead of rolling up to farms and wineries like it once did, however, now it's rolling up in the appealing patio behind his restaurant on Wednesday and Thursday nights though the summer.

Just off the Healdsburg square is four-week-old Campo Fina, a restaurant from Scopa's Ari Rosen that's the most buzzworthy new restaurant in town, with a line queuing up each day before it opens. Like Scopa, it's a narrow sliver of a restaurant, but out back there's a spacious patio with a bar, a bocce ball court (what's with all the bocce in Healdsburg?) and the restaurant's wood-fired pizza oven. Inside and out are very nice.

Not all the action is happening in downtown Healdsburg. Copain Winery is soon to host a series of exclusive "supper club dinners" with visiting chefs; the first one featured Ken Tominaga of Hana Japanese Restaurant in Rohnert Park. Corey Lee, owner of San Francisco's Benu and ex-French Laundry chef de cuisine, cooks Sept. 2. Lachlan Mackinnon-Patterson of Boulder's Frasca mans the stove Sept. 30. And celebrated chef David Chang of New York's Momofuku takes the stage Dec. 14. Seating is limited, and tickets are expensive. They start at $300 for wine club members, and it's $400 for everybody else.

Meanwhile, winemaker Pete Seghesio has submitted plans for a wood-fired pizza and salumeria at 440 Center St., the site of the old downtown post office, which burned down in 2010. Jackson Family Wines, aka Kendall-Jackson, is moving into the Healdsburg Avenue space vacated by Shimo Modern Steak with plans for the K-J Cafe and a menu of small plates, pastries, charcuterie and locally sourced products.

Pizzando, a new restaurant from Spoonbar executive chef Louis Maldonado and consulting chef Liza Shaw, is set to open next month down the street in the space formerly occupied by Cafe Newsstand. And work is progressing on SHED, a 9,700-square-foot, multi-use space that will house retail shops, a cafe, a wine bar, a gardening store and an event center on North Street.

That's a lot to digest.