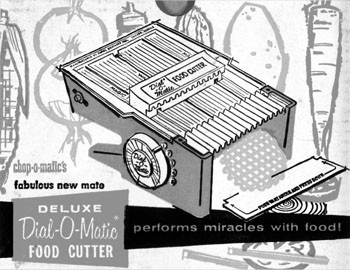 Dyn-O-Mite: The Dial-O-Matic Food Cutter makes you a master chef in minutes! Now, you can perform miracles with food with no more effort than a flick of your wrist! --From the Dial-O-Matic instruction book, 1959

Salesmen of the Century

As seen on TV! We expect this tag line on aerosol cans of spray-on hair and Inside-the-Shell Egg Scramblers. But for museums, no. Museums are for priceless artifacts and groundbreaking sculptures, not Chop-O-Matics. Unless, that is, you see the Chop-O-Matic as a modern marvel, an all-American marriage of form, function, and commerce. It slices, it dices, it has changed the way we shop and cook. The strange and wonderful history of the Popeil family has had more influence on your American life than you ever even suspected.

"As far as I know, this is the first time that the complete story of the Popeil/Ronco products has been told," says Tim Samuelson, curator of the upcoming "But Wait, There's More!" exhibit at Napa's American Center for Wine, Food, and the Arts, and author of the just-released book of the same name. "Basically it goes from a table out on the street to national television. Most people don't realize the complexity of the story, how the product, the people, and the salesmen are all tied together."

The Popeil family combined vaudevillian showmanship with ingenious product design, beginning with modest items such as the glass knife ("It's always sharp!") and leading up to Ronco's Showtime Rotisserie & BBQ, which you have very likely seen expertly demonstrated on QVC by its creator, Ron Popeil.

Ron Popeil is the "Ron" in Ronco. His father, Samuel "S. J." Popeil, and his uncle, Raymond Popeil, were the "O-Matic" men. The family dynasty grew "literally on the streets of Chicago," says Samuelson, "by people in the Popeil family selling goods in outdoor markets, county fairs, and auto shows. [Salesmen] manned the tables, and through mesmerizing gestures and motions gathered people around them. They were all little products that were designed so a pitchman could take a suitcase full of them, haul them to the site, and sell them.

"The products got larger and more complicated. They were more saleable on television and given flashy names, the most famous being the Veg-O-Matic. In the process, their products and members of the Popeil family became international popular culture heroes."

Popeil family history is sensationalistic and preposterous enough to be the makings of an epic novel, an unwritten Michener: Salesmen. Nathan Morris, S. J.'s uncle, sold kitchen gadgets on the Jersey boardwalks. In 1958, S. J. Popeil sued him for patent infringement; Popeil believed that Morris' Roto-Chop too closely resembled his own Chop-O-Matic. Morris was upset with his nephew, feeling him ungrateful for the break in gadget sales he had given him. After a heated exchange in the courtroom, Morris suffered a sudden heart attack, and a guilt-riddled S. J. settled the case--only to have his uncle miraculously recover the very next day.

S. J. Popeil likewise got his son Ron Popeil started in the business, then cast him out of the family when Ron began Ronco. But it was Ron who came to outshine them all; he's the one with the autobiography, The Salesman of the Century. And you can buy it straight from Ronco.

Ronco's television spots--honed to fast-talking perfection--adapted classic pitchman techniques such as the "countdown," which you can still witness in Ron Popeil's QVC spots hawking the Showtime Rotisserie: "You're not going to pay $320 for this product, you're not even going to pay $220," he says then counts down to "four easy payments of $39.95." And, of course, there's always the bonus product--"But wait, there's more!"

"The promotion on television seemed absolutely irresistible," says Samuelson. In the case of the Veg-O-Matic, 11 million of them were sold within 10 years of their introduction in 1951. "I turn up examples of them all the time, and they always still work. I think the very nature of the fame of the Popeil family and their products is everybody, or their parents or their relatives, has some Popeil-related product tucked away in their closet."

"But Wait, There's More!" will have excerpts of the most famous commercials playing on a video loop. "You can't have a Popeil/Ronco show and not have those commercials!" Samuelson says. Included is an early infomercial showing a charismatic Ron Popeil at the age of 21, demonstrating the Chop-O-Matic.

"People assume many of the things that are sold on TV are not of good quality and won't work. But there always is a strong degree of quality and reliability in Popeil products. I have a Chop-O-Matic, which is perfect for chopping up coleslaw or making potato pancakes. I have a Veg-O-Matic which I use when I want to make scalloped potatoes. Many of them are over 40 years old, and they all do their job."

The best Popeil product strives for perfection in the purest of ways: if it does not function simply and attractively, it will be impossible to explain succinctly in a 30-second commercial. The better it works, the better it sells. Take the Veg-O-Matic, which had to be good enough so that it was the star of the commercial--not Michael Jordan, not even Ron Popeil, but the Veg-O-Matic itself, whose structure and performance was such that the need for a famous face grinning blankly behind it became obsolete.

Samuelson's own discovery of all things Popeil was basically happenstance. "A number of years ago, I found at a thrift store a 1950 donut maker. It had a beautiful form and color, it was an early use of plastics, it was designed for easy manufacturing--every good product design should be." Samuelson noticed the imprint--Popeil Brothers, Chicago--on the bottom, and the name rang a bell. "I remembered the name from all of those annoying commercials on television when I was a child. So I looked into it and found out that they had an amazing story."

A cold call to Ron Popeil himself was the start of Samuelson's research. Samuelson, cultural historian with the Chicago Department of Cultural Affairs, has a background in architectural history and did not set out to become an authority on Popeil. "I always did this research for my own interest and never thought about doing anything about it in terms of books or exhibits," he says. But, he explains, when a short article appeared in the New York Times on Popeiliana, "Suddenly, there was all kinds of response. One of the people who called me after that early story was Betty Teller from COPIA."

Teller, COPIA's assistant director of exhibitions, says the Popeil legacy "struck me as the perfect topic for us. It's such a classic American story. Plus the gadgets! These are elements of everyday kitchen design, and they have made their way into your consciousness. What's interesting with food and kitchen stuff in general is how many memories they're connected to. In the exhibitions, I try to engage people and make them aware of their own personal memories, of different aspects that they hadn't thought about. One of the great ways to do that is through objects of nostalgia."

"The whole exhibit is all my own collection," says Samuelson. "I've been gathering the past eight years or so by going to Salvation Army and Goodwill stores. Now I've evolved into the 21st century, and I have gotten a lot of them on eBay, which has actually been one of the greatest sources of being able to find the products."