Butchery by the Bay 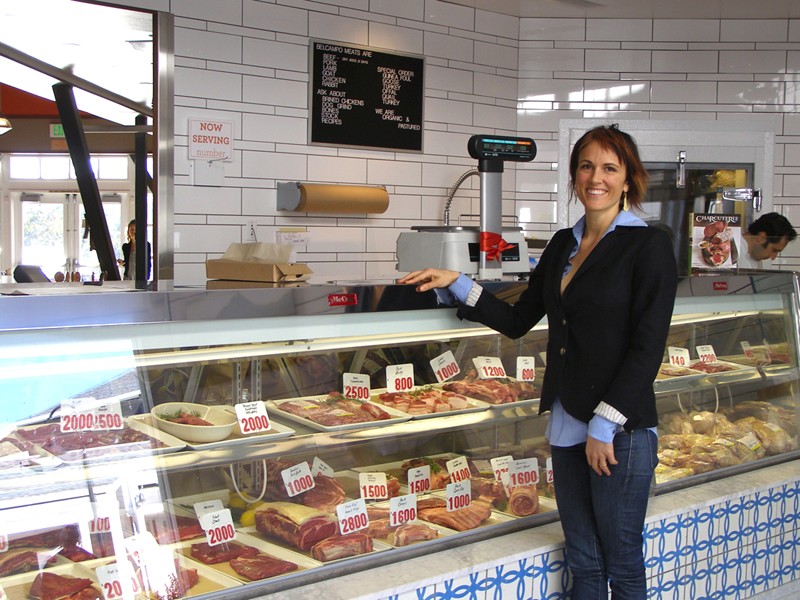 Here's a fun survey to take in a room full of beef industry executives: How many of y'all went through that phase in high school when you went vegetarian, you know, for ethical reasons? Any hands?

Count Anya Fernald, for one. Having read that it takes 12 pounds of grain to make one pound of beef, the earnest student swore off meat. After college, she worked with cheesemakers in Sicily, coordinated Slow Food Foundation programs in Europe and directed San Francisco's Slow Food Nation event. Now, as CEO of Belcampo Meat Co., she says, "I love meat, I love talking about it, love thinking about it!" Clearly, she's comfortable with the ethics of this new venture.

Belcampo is an ambitious "ranch to table" operation. Unlike smaller grass-fed operations that can only offer shares of animals in frozen parcels, Belcampo has scaled up a vertically integrated production, processing and retail system that's set to go statewide. The first in a chain of butcher shop and restaurant outlets opened in Larkspur in November 2012.

Fernald was initially brought in as a consultant when investor Todd Robinson purchased land in Siskiyou County, she says, speaking a mile-a-minute from her Oakland office. Little wonder. She's also developing a 20,000-acre sugar plantation in Belize with a "farm to bottle" rum distillery powered by biomass, plus coffee and chocolate, and a 12-room agritourism lodge.

"It's bigger and more engaging in some ways than the California operation," Fernald says. "There's lots of chemical agriculture in Belize, and it's a very, very delicate ecosystem in an amazing delta of rivers."

As if that wasn't enough, Fernald also consults for Belcampo's cattle ranch in Uruguay. That's a commodity operation, and the beef will never be shipped to the California market, Fernald insists. "I don't care about the math, it just doesn't feel right."

Unlike Uruguay, however, lack of viable grass during summer months is a big issue in California's grass-fed beef business. "I've seen enough of the shady side of grass farming," Fernald avers. At Belcampo's CCOF certified organic ranch, a crew of veteran ranchers and bright-eyed ecology graduates are able to keep the cattle on pasture for all but a one-and-a-half-month "bridge" during the year.

The secret to their system is, it's not just cows. It's a mob. Cattle, sheep, goats, heritage pigs, ducks and chickens are rotated through the pasture inside electrically fenced enclosures. "Keeping all those animals is kind of a party trick," Fernald says. "The animals look almost crowded." Because the differing species graze at different levels, Belcampo's farm managers can extract more productivity from this relatively poor range land. Following just three days of grazing, a particular area is rotated into one full year of rest.

The contemporary farm buildings include a kitchen, where future events will be held—for instance, they're talking with local author and Butcher's Guild cofounder Marissa Guggiana about holding butchery classes there.