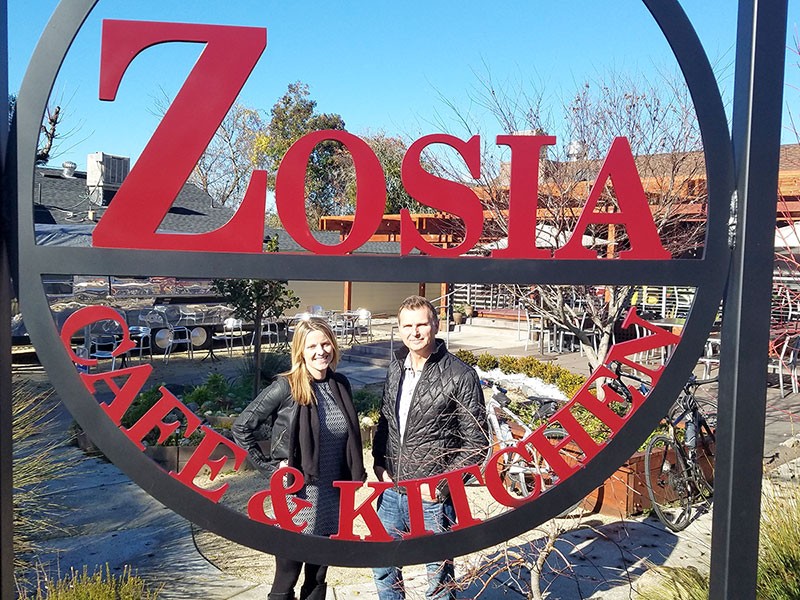 Aas vegetables go, the cabbage is about as unsexy as it gets. It doesn't have the voluptuous appeal of an eggplant or the fireworks of the habanero pepper, but the humble cabbage deserves greater appreciation.

If you're a poor Russian or Pole, cabbage (and onions, beets and potatoes) gets you through a long winter. Cabbage is easy to grow and it thrives in cold weather. It stores well in a cold basement, it's nutritious, and it's cheap. And cabbage is nothing if not versatile. It's a canvas painted upon by hunger and creativity.

Slavic countries have elevated cooking the hearty vegetable to an art form. It can be steamed, boiled, stuffed, braised, pickled and fermented.

That cabbage creativity is on display at Zosia Cafe & Kitchen, an unlikely outpost of Eastern European cooking in downtown Graton. Located on a highly visible corner lot that recently housed the short-lived Bambu Tea House, Zosia (pronounced "zo-shuh") is the work of Monika and Slawek Michalak. They're from Poland but met in Sonoma County. Slawek was partners with Les Claypool in Claypool Cellars. Zosia's talented chef, Ekaterina Zaitseva, is from Siberia and previously worked at Santa Rosa's Russian-centric European Food Store.

The idea for the restaurant grew out of the popularity of the couple's "sauerkraut parties," which gave them the idea that an Eastern European–themed restaurant might work.

Orders for the Eastern European side of the menu are 70 percent of sales, says Slawek. "We were right about it."

While cabbage is Eastern Europe's pan-national vegetable, borscht is the dish that unites the diverse Slavic countries. The beet-centric version with a dab of sour cream is the most common form of the soup in this country, but borscht varies widely.

"You know how many versions of borscht there are?" Ekaterina says. "Every single [Russian] republic has their own version."

Not all borscht is made with beets; Zosia's Ukrainian version, for instance, is made with tomatoes, cabbage and vegetable broth ($7.95). The hearty Polish version, called

barszcz, is made with cabbage, sauerkraut, potatoes and pork-rib meat and a beef-pork broth ($7.95). Both are delicious, deeply satisfying soups.

Best of all is the bigos ($8.95), a brothy Polish stew made with sliced crimini mushrooms, sauerkraut and braised beef. It's tailor-made for cold weather. You want more cabbage? The cabbage rolls ($8.95) are superb, stuffed with ground pork and rice draped in a light tomato sauce.

The kitchen makes about 500 pierogies a day to keep up with demand. The little dumplings ($9.95) are a Polish staple and filled with pork and beef, potato and housemade farmers cheese or sauerkraut and mushroom.

For now, Zosia (named after the Michalaks' daughter) is only open for breakfast and lunch. They serve American breakfasts, hamburgers and pulled pork. A gleaming 1968 Airstream out front on will soon host a coffee and wine bar. But for me it's all about the Eastern European side of the menu. And the cabbage.