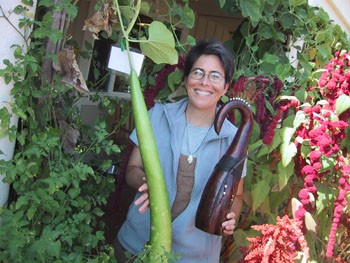 Out of Their Gourds

From the garden springs art, in Food for Thought's third annual Calabash Festival

Tacked above the gate leading into Food for Thought's organic garden in Forestville, there's a sign that pretty much sums up the organization's entire philosophy: "Life begins the day you start a garden."

Plant a seed around these parts, care and nourish it a little bit, and it'll spring from the earth with exceptional vitality. A gourd, for instance, will grow to bizarre, enormous proportions. They hang pendulous from the arbor above Rachel Gardner's head.

Gardner is a client services manager for Food for Thought, also known as the Sonoma County AIDS Food Bank, and she manages the group's garden projects. The organic garden in Forestville is a collaboration with the Occidental Arts and Ecology Center, and Gardner clearly relishes showing off the fruits of their efforts.

"This one's a hosho," she says, fondling one of the bumpy, bulbous dark green gourds hanging from the lattice. "They're also known as caveman clubs, or Klingons, because of their resemblance to the alien characters on Star Trek."

Indeed, the specimen she's showing looks decidedly Worfish. It's easily the size of Gardner's head, attached to a long, elegant neck. There are dozens of them, along with tomatoes, beans, squash, chard, and other vegetables and herbs, all of which are used to help feed Food for Thought's 450 clients, who are not charged for the services.

Gardner touts the therapeutic benefits of the garden as much as its ability to provide food. There's a small pond in one corner, where clients who come in to pick up their food (besides organic vegetables, donations provide everything from breakfast cereals to canned goods) can meditate and relax. No one here grows impatient waiting in line for government cheese. This isn't welfare as we've known it--it's welfare as it should be.

Of course, such services cost money, so three years ago, in an effort to raise more funding, Food for Thought asked local artists to create works of art using the gourds grown in the garden, then donate the works so the food bank could auction them off in an event dubbed Calabash. More than 60 Sonoma County and Bay Area artists have agreed to participate in the third annual Calabash on Oct. 5 in Forestville; at auction, the art pieces range in price from $20 to $2,000.

"I just took to the gourds immediately," says Santa Rosa artist Loreen Barry. She got hooked during the first festival, and now you might say she's out of her gourd for gourds. She's completed 40 separate pieces since then, including the lutelike gourd gracing the program of this year's event.

There's more than one way to make gourd art. After drying her gourds, Barry cuts them open with a saw and hollows them out, lining the inside with crushed eggshell. Other artists, like Santa Rosa's Monty Monty, whose entry this year consists of an eggplant-sized bulb suspended from a sickle plugged into a trophy base, prefers to use the dried gourds as is.

Sometimes, the sensual shapes of the gourds can be quite moving, as in Ellen Cheeks' entry, Tonight I Will Lie with You but Tomorrow I Will Cry, which features two slender-necked gourds intertwined like mating swans.

Much like the seeds that yielded the gourds used in the show, Food for Thought sprang up some 15 years ago from the shared needs of local AIDS patients, their families, and friends, all of whom worked together to make Food for Thought what it is today. Gardner is optimistic that same spirit of cooperation will color this year's Calabash.

"We're hoping that people will come and be in the spirit of bidding things up," she smiles.

'Calabash: A Celebration of Gourds, Art, and the Garden' takes place Sunday, Oct. 5, from 1pm to 5pm. In addition to the silent auction, free organic food made from the garden will be served. For more information, call Food for Thought Sonoma County AIDS Food Bank at 707.887.1647 or visit www.calabashartfest.org.