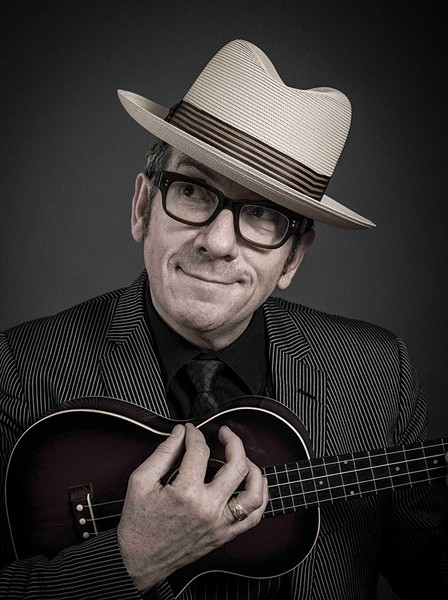 Elvis Costello's most enduring musical trait is his constant curiosity. Whether it's as frontman for the Attractions and the Imposters, or partnering up with other musical luminaries, Costello is still evolving after 35 years.

"It's always great to play with the Imposters, you know," says Costello. "We haven't had as much opportunity to play this year. Whenever we reconvene, there's always a new combination that comes from it, because we don't burn it out."

Costello hinted at his approach to creating surprising and diverse set lists. "We've been looking at some of the songs from Wise Up Ghost over the year, and getting some different things out of the recorded version."

Wise Up Ghost is Costello's most recent release, a 2013 album co-produced with the Roots. The house band for The Tonight Show with Jimmy Fallon approached Costello after he appeared on Late Night with Jimmy Fallon in 2009. "It's a three-way dialogue between [drummer] Questlove's rhythmic approach and my words filtered through [producer and engineer] Steven Mandel's editorial production," explains Costello.

Since the album came out last year, the songwriter has been constantly reworking tunes for Imposters and his solo shows, offering new arrangements with each performance. "Music is like that, all the time changing under your hands," he says. "That's been the case for the last 37 years."

This November, Costello unveils another new cooperative effort, when Lost on the River is released. Producer T Bone Burnett assembled a group of artists, including Costello, Mumford and Sons' Marcus Mumford and My Morning Jacket's Jim James to write and record songs using unused Bob Dylan lyrics from the late '60s. Dylan's only involvement in this album was granting permission.

"There were 24 lyrics at our disposal, and we were given complete license to set them any way we heard them, and use our own eyes on the editorial," explains Costello. "That's a lot of freedom to be given, you know. And it was nice collaborating with someone who couldn't put up an argument."