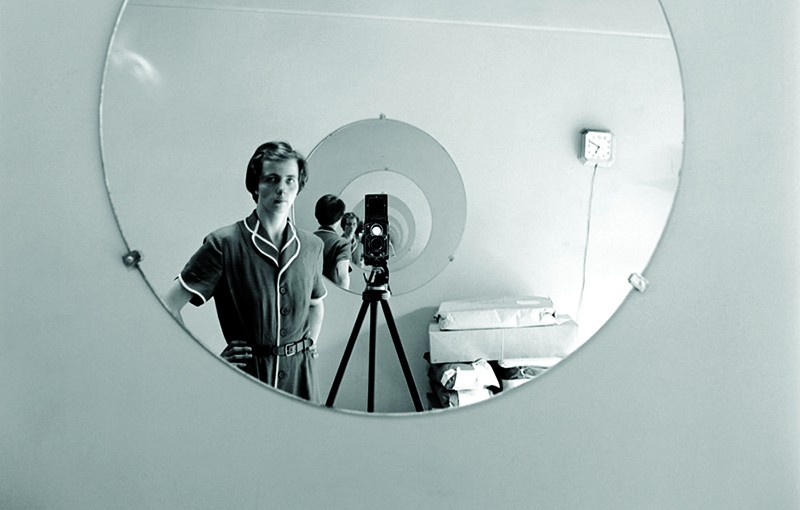 The aloof meets Maloof in Finding Vivian Maier, John Maloof's account of the detective work he did to learn more about the woman whose photographs he discovered in a locker.

Vivian Maier never exhibited her photos or home movies, shot from World War II to the 1970s. Some of the immense volume of her work is a harder-edged version of the photojournalism that made Life magazine sometimes indelible, sometimes trite; other pieces are compassionate, invaluable images of people on the margins, taken by a brave photographer. Her best work is as good as the photography of Weegee or Gordon Parks.

Born in New York, Maier considered herself French (her mother was from Alsace). She dressed functionally, mannishly. In self portraits, she's sometimes as horsey as Nancy "Miss Hathaway" Culp, and sometimes as handsome as actress Rachel Griffiths.

Maier was a mystery, and the mosaic-like fragments people remember make up this investigation. During years of work as a domestic and a nanny, Maier hid behind identities. "I'm sort of a spy," she once said to an employer. She changed her name and her range, from the Hamptons to Chicago, and even worked as Phil Donahue's servant, though the TV personality has little recollection of her.

Ultimately, if Finding Vivian Maier is the work of a promoter, it's also the work of an ardent fan. Maloof is eager to prove that his hands are clean—his research demonstrates Maier did at one time want to promote some of her photographs, which clears him of implications of grave-robbing and privacy-disturbing. Rather than echoing accusations at the person who found, restored and brought forth Maier's haunting work, ask why, in our cultural-integrity vacuum, crowds are so fascinated by stories of monk-like, suffering artists.