Who is 'Who Is Stacey Lawson?' 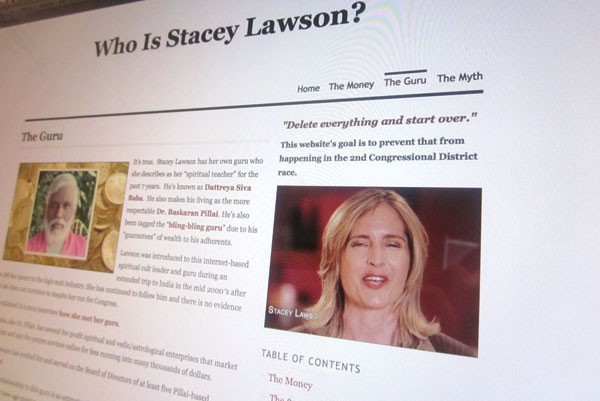 Ideally, transparency and accountability would be the cornerstones of any election campaign, but for a heated political arena in the internet age, they can also be the first to crumble.

On April 15, pre-election machinations whirred with the debut of a website and Twitter account calling itself "Who Is Stacey Lawson?" The staunchly anonymous author has been dedicated to digging up damaging information about Lawson, one of the frontrunners in the campaign to fill Lynn Woolsey's seat in the newly redrawn Second Congressional District. The site has triggered a small but fascinating local skirmish fueled by accusations of nefarious election strategies and the importance of transparency.

"It's patently hypocritical, because the same person that's hiding behind this anonymous screen name and attacking Stacey on the grounds that she allegedly had things to hide, that she's a stealth candidate, is taking that whole stealth thing 20 steps further by completely hiding their own identity," says Cynthia Boaz, a political science professor at Sonoma State University. "To accuse someone of something that you yourself are engaging in—it takes a lot of credibility out of the accusations themselves. It's really disappointing that people in our local political scene would sink to that level."

Boaz's partner, Jason Liles, former Healdsburg mayor and member of the Sonoma County Planning Commission, is a volunteer coordinator on Lawson's campaign. Boaz says she herself is not involved with the campaign, except as a voter and a supporter. She says that "Who Is Stacey Lawson?" is a "desperate, dirty-tricks campaign strategy," and has implied in Twitter postings that one of the other candidates could be behind the corrosive pop-up.

Boaz refuses to speculate on who specifically might be behind the site.

Jake Bayless, editor of the online site Empire Report, says that, like Boaz, he's not fan of any sources' choice to remain anonymous. Bayless himself has been busy digging up information on Lawson, after coming across an article in the North Coast Journal that mentioned the multimillionaire entrepreneur's past gig as a spirituality columnist for the Huffington Post. Further digging revealed that all of Lawson's posts had been deleted in 2011, before she entered the congressional race.

Using the Internet Archive's Wayback Machine, which archives content back to 1996, Bayless was able to retrieve 48 soul-searching pieces with titles such as "Knowledge Is Bondage," "We Are the Terrorists" and "Igniting the Modern Mystic." A sample passage, "What It Means to Delete Everything and Start Over," finds Lawson "hurtling towards oblivion," writing decrees such as "All my well worn beliefs? Piles of crap. Delete. Everything I thought I knew? Bullshit."

After Bayless reposted the articles on Empire Report, "Who Is Stacey Lawson" reached out to him privately on Twitter, suggesting, "Let's work together on Stacey Lawson." Bayless declined.

"Really for me, it's just about the facts. Shine the flashlight on them," says Bayless, in reference to his decision to republish the Huffington Post materials. "This was one of those things where clearly the candidate would have preferred that they stayed in the dark, and to me that's problematic."

"Who Is Stacey Lawson?" did not respond to requests for comment from the Bohemian.

Lawson, who moved to Marin three years ago from San Francisco, was also called to task by fellow candidate and Marin County Supervisor Susan Adams at an April 17 Dominican University debate for her involvement as executive chair in a company called Chelsey Henry Inc., which manufactured women's purses at a factory in China. Among other things, the company failed to pay payroll taxes during 2007–2008.

This history, along with disclosures of Lawson's top campaign donors—including Tim O'Reilly of O'Reilly Media, the Men's Wearhouse's George Zimmer and controversial former congressman Doug Bosco—has made the pages of "Who Is Stacey Lawson?" The site's author appears particularly obsessed with debunking Lawson's own biography—in particular, her story of growing up in a trailer.

Andrew Acosta, campaign consultant for Jared Huffman, flatly denies any involvement with the site. "We have nothing to do with it," he says.

Tom Higgins, political consultant to the Norman Solomon campaign, says any suggestion of the Solomon campaign being tied to "Who Is Stacey Lawson?" only constitutes more dirty tricks.

"There is a smell of desperation in the anonymous, unsubstantiated and false accusations of what would be federal campaign law violations if our campaign had anything to do with the 'Who Is Stacey Lawson?' website and Twitter operation," says Higgins, asserting that he is "190 percent, absolutely, dead-positive certain" that Norman Solomon's campaign is not behind the site. "I have no clue who it is," he adds.

Bayless agrees that transparency is key. "I have a problem with the anonymity," he says. "It's bad for politics."